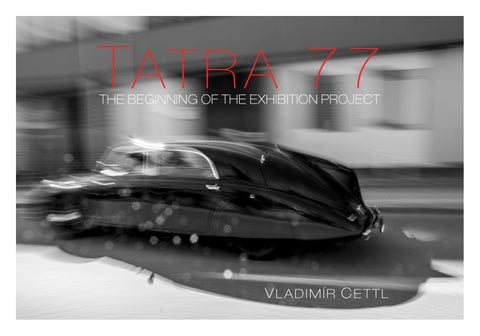 The exhibition project „Tatra 77“ aims to photographically document the current condition of the remaining Tatra 77 and 77A vehicles produced in Kopřivnice. Between the years 1934 and 1938, a total of 251 vehicles were produced, of which just over twenty have been preserved until today (in the Czech Republic, the Netherlands, Switzerland, the USA and New Zeeland). The culmination of my pursuits, inquiries, negotiations and far-flung traveling will be an exhibition of photos of rare vehicles in the Technical Museum Tatra in Kopřivnice in the autumn of 2017.

The logo of the exhibition

is the shape of a drop, which was the key design dogma for the Tatra 77 and the following so called aerodynamic Tatras. The exhibition will consist of five to seven panels in the shape of a drop with the dimension 5,1 meters (the length of a Tatra 77) by 2 meters. When creating the panels, the inspiration came from how the sheet iron plates for the exhibition â&amp;#x20AC;&amp;#x2DC;Shadows of Memoryâ&amp;#x20AC;&amp;#x2122; at Prague Castle in 2014 were created. The entire system is screwed together and can be taken apart into pieces measuring a maximum of 1 x 2 meters, meaning it will be easy to transport for future exhibitions. Each iron plate will hold 8 to 16 large format photographs, 75 x 50 cm, and the curved section at the front will contain text panels concerning the history of the development of the vehicles Tatra 77 and 77A, the characteristics of their construction, and their contemporary context such as the automobile production at that time and the social impact of the time right before the second world war.

Half or the Tatra 77 and 77A vehicles, the â&amp;#x20AC;&amp;#x2DC;easierâ&amp;#x20AC;&amp;#x2122; half, have already been shot. Now the second, and much more complicated, half with negotiations with owners and travels across the ocean lies ahead. We have already been on an interesting journey all around Europe, but bigger challenges now await us. The groundbreaking Tatra 77, which is stunning yet today, is an interesting subject to research and shoot, and deserves such large ambitions. A sincere thank you to those who are helping me carry out this project!