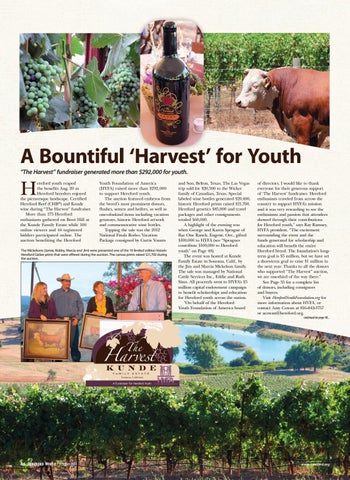 A Bountiful ‘Harvest’ for Youth “The Harvest” fundraiser generated more than $292,000 for youth.

and Son, Belton, Texas. The Las Vegas trip sold for $20,500 to the Wicker family of Canadian, Texas. Special labeled wine bottles generated $20,400, historic Hereford prints raised $21,700, Hereford genetics $85,000 and travel packages and other consignments totaled $68,000. A highlight of the evening was when George and Karen Sprague of Bar One Ranch, Eugene, Ore., gifted $100,000 to HYFA (see “Spragues contribute $100,000 to Hereford youth” on Page 48). The event was hosted at Kunde Family Estate in Sonoma, Calif., by the Jim and Marcia Mickelson family. The sale was managed by National Cattle Services Inc., Eddie and Ruth Sims. All proceeds went to HYFA’s $5 million capital endowment campaign to benefit scholarships and education for Hereford youth across the nation. “On behalf of the Hereford Youth Foundation of America board

of directors, I would like to thank everyone for their generous support of ‘The Harvest’ fundraiser. Hereford enthusiasts traveled from across the country to support HYFA’s mission and it was very rewarding to see the enthusiasm and passion that attendees showed through their contributions for Hereford youth,” says Ray Ramsey, HYFA president. “The excitement surrounding the event and the funds generated for scholarship and education will benefit the entire Hereford breed. The foundation’s longterm goal is $5 million, but we have set a short-term goal to raise $1 million in the next year. Thanks to all the donors who supported “The Harvest” auction, we are one-third of the way there.” See Page 35 for a complete list of donors, including consignors and buyers. Visit HerefordYouthFoundation.org for more information about HYFA, or contact Amy Cowan at 816-842-3757 or acowan@hereford.org. 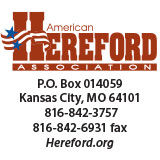