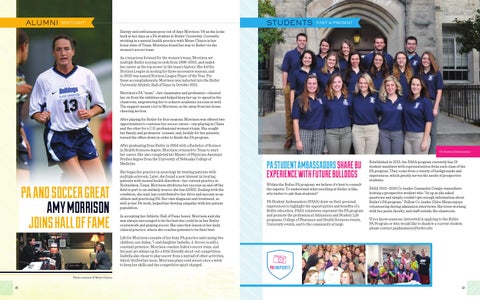 Energy and enthusiasm pour out of Amy Morrison ’04 as she looks back at her days as a PA student at Butler University. Currently working in a mental health practice with Meier Clinics in her home state of Texas, Morrison found her way to Butler via the women’s soccer team. As a tenacious forward for the women’s team, Morrison set multiple Butler scoring records from 1999–2002, and ended her career as the top scorer in the team’s history. She led the Horizon League in scoring for three successive seasons, and in 2002 was named Horizon League Player of the Year. For these accomplishments, Morrison was inducted into the Butler University Athletic Hall of Fame in October 2015. Morrison’s PA “team”—her classmates and professors—cheered her on from the sidelines and helped keep her up-to-speed in the classroom, empowering her to achieve academic success as well. The support meant a lot to Morrison, so far away from her home cheering section. After playing for Butler for four seasons, Morrison was offered two opportunities to continue her soccer career—one playing in China and the other for a U.S. professional women’s team. She sought her family and professors’ counsel, and, luckily for her patients, turned the offers down in order to finish the PA program. After graduating from Butler in 2004 with a Bachelor of Science in Health Sciences degree, Morrison returned to Texas to start her career. She also completed her Master of Physician Assistant Studies degree from the University of Nebraska College of Medicine.

She began her practice in neurology by treating patients with multiple sclerosis. Later, she found a new interest in treating patients with mental health disorders—her current practice in Richardson, Texas. Morrison attributes her success on and off the field in part to an unlikely source: she has ADHD. Dealing with the condition, she said, has contributed to her drive and success as an athlete and practicing PA. Her own diagnosis and treatment, as well as her PA work, helped her develop empathy with her patient population. In accepting her Athletic Hall of Fame honor, Morrison said she was always encouraged to be the best she could be in her Butler coursework and playing soccer. She uses that lesson in her daily clinical practice, where she coaches patients to be their best. Life for Morrison consists of her busy PA practice and raising two children: son Aidan, 7, and daughter Isabella, 4. Soccer is still a constant presence. Morrison coaches Aiden’s soccer team, and the pair are always up for a little friendly shoot-out competition. Isabella also chose to play soccer from a myriad of other activities, which thrilled her mom. Morrison plays coed soccer once a week to keep her skills and the competitive spirit charged.

PA STUDENT AMBASSADORS SHARE BU EXPERIENCE WITH FUTURE BULLDOGS Within the Butler PA program, we believe it’s best to consult the experts. To understand what enrolling at Butler is like, who better to ask than students? PA Student Ambassadors (PASA) draw on their personal experiences to highlight the opportunities and benefits of a Butler education. PASA volunteers represent the PA program and promote the profession at Admission and Student Life programs, College of Pharmacy and Health Sciences events, University events, and to the community at large.

Established in 2013, the PASA program currently has 25 student members with representatives from each class of the PA program. They come from a variety of backgrounds and experiences, which greatly serves the needs of prospective students. PASA 2015–2016 Co-leader Cassandra Craigie remembers hosting a prospective student who “lit up as she asked questions and simply couldn’t get enough information about Butler’s PA program.” Fellow Co-leader Chloe Meiss enjoys volunteering during admission interviews. She loves working with her peers, faculty, and staff outside the classroom. If you know someone interested in applying to the Butler PA Program or who would like to shadow a current student, please contact paadmission@butler.edu. 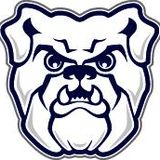