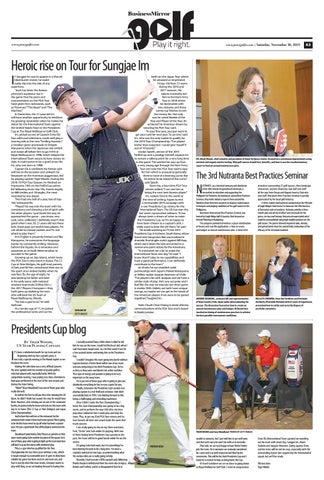 Heroic rise on Tour for Sungjae Im I

f Sungjae Im was to appear in a Marvel blockbuster movie, he could easily slip into the role of any superhero. Such has been the Korean phenom’s explosive rise in the game that his peers and commentators on the PGA Tour have given him nicknames, such as “Ironman,” “The Beast” and “The Machine.” In December, the 21-year-old Im will have another opportunity to reinforce his growing reputation when he makes his debut for the International Team against the United States Team in the Presidents Cup at The Royal Melbourne Golf Club. Im, picked as one of Captain Ernie Els’ four wild-card selections, could well play a starring role as the new “Smiling Assassin,” a moniker given previously to Shigeki Maruyama when the Japanese star smiled and swept all before him to go 5-0-0 at Royal Melbourne in 1998, which helped the International Team secure its lone victory to date. It could prove to be a good omen for Im, who was born in 1998. Captain Els is confident his Korean pick will rise to the occasion and unleash his firepower on the American juggernaut, led by playing captain Tiger Woods. During the 2018-19 PGA Tour Season, Im finished an impressive 19th on the FedExCup points list following seven top-10s, thanks largely to 480 birdies and 18 eagles, the most recorded by any player. “He’s had one hell of a year, lots of top10s,” enthused Els. “Played his way into the team with his consistency and showing a lot of spirit with the other players. I just loved the way he approached the game…you know, very cool, calm, collected. I definitely wasn’t that good when I was 20, 21 years old but these kids, these guys are world-class players. I’m not afraid to choose rookies and I’m not afraid to play them.” Im’s English is presently limited and like Maruyama, he overcomes the language barrier by constantly smiling. However, behind the façade, Im is tenacious and possesses an in-built determination to succeed in the game. Growing up on Jeju Island, which hosts the PGA Tour’s only event in Korea, The CJ Cup at Nine Bridges, his golf-mad parents, Ji Taek and Mi Kim, introduced their son to the sport at an indoor facility when he was four. By the age of eight, he was beating his father and later in his early teens with national amateur teammate Si Woo Kim— the 2017 Players Champion—they both grew up idolizing the man who will lead the US Team at Royal Melbourne, Woods. “He was a god to us,” Im told Golf.com. At a tender age of 17, Im joined the professional ranks and cut his

teeth on the Japan Tour where he amassed an impressive 14 top-10s from 51 starts during the 2016 and 2017 seasons. His talents inevitably led him to the Korn Ferry Tour in 2018 where he dominated with two victories and three runner-up finishes to win the money list. Not only was he voted Rookie of the Year and Player of the Year, Im achieved his American dream by securing his PGA Tour card. “In your first year, you just want to get your card for next year. To survive,” said Im, who was the only rookie to qualify for the 2019 Tour Championship. “I’ve played better than expected. I could give myself 9 out of 10 [score].” Jordan Spieth, winner of the 2015 FedExCup and a prodigy himself, expects Im to remain a talking point for a very long time in the game. “He worked his way up from a very young age through the Korn Ferry Tour and now the PGA Tour seems easy for him which is unusual as generally there is more of a learning curve. But he seems to be ahead of the curve,” said Spieth. Kevin Na, a four-time PGA Tour winner added: “I can see him as being the next best Korean player.” Im, ranked 33rd in the world at the time of writing, hopes to end a memorable 2019 campaign with a rare Presidents Cup victory for the International Team. The US has won the last seven consecutive editions. “It has always been a dream of mine to make the Presidents Cup, so I’m so happy to have been chosen as a captain’s pick. I really want to beat the US Team,” he said. He recalls watching on TV the 2015 Presidents Cup in Incheon, South Korea, where home hero Sangmoon Bae was involved in dramatic final singles match against Bill Haas, which went down the wire and ended in a narrow one-point victory for the Americans. “It motivated me a lot to make the International Team one day,” he said. “I know that if I play to my capabilities and have a good performance, I can definitely contribute to the team.” Im thinks he can establish solid partnerships with Japan’s Hideki Matsuyama or fellow rookie Joaquin Niemann of Chile. “I’ve played a lot with Joaquin and we have a similar style of play. He’s very accurate and I feel like the way we execute our short game is similar. With Hideki, we both have unique swings, so maybe we can get in the heads of the American players if we were to be paired together!,” laughed Im. Note: Chuah Choo Chiang is senior director, communications of the PGA Tour and is based in Kuala Lumpur.

Dr. Micah Woods, chief scientist and president of Asian Turfgrass Center, focused on a continuous improvement using nutrient and organic matter testing. Why golf courses should test, benefits, and how to use the results/summary report to feed an annual maintenance plan.

utranta, as a chemical company and distributor of the elite brands of agricultural chemicals, is committed to education and supporting the Philippine Turf Industry. By hosting an annual Best Practices Seminar, they invite industry experts from around the World to share their best practices to improve maintenance techniques and playing conditions of the golf courses in the Philippines. Nutranta’s third annual Best Practices Seminar was hosted by Eagle Ridge Golf & Country Club focused on Annual Planning & Budgeting. The program provided attendees a great combination of theory and real-life application—how to create and budget an annual maintenance plan. A total of 65

attendees representing 25 golf courses, three landscape contractors, and one University. Apo Golf sent staff all the way from Davao and Baguio Country Club also sent staff. Nutranta’s Best Practices Seminar is greatly appreciated by the local golf industry. A three-month trial had been conducted on the 9th hole of Eagle Ridge’s Aoki Course to showcase the effectiveness of Nutranta’s suite of products. Nutranta provide a threemonth plan and all the fertilizer and chemicals for the green, tee box and fairway. Nutranta demonstrated what could be accomplished using high-quality products on the golf course. The greens showed improved color, density, and putted better than the control holes indications of the efficacy of the chemicals involved.

Andrew McDaniel, assistant GM and superintendent of Keya Country Club, Japan spoke about planning for success. The discussion focused on how to create an annual maintenance plan and budget. McDaniel also touched on timing of maintenance practices to achieve the best possible tournament conditions.

Bella Fe Carmona, from the Fertilizer and Pesticide Authority (Pesticide Division) with 41 years of experience, presented how to safely and correctly dispose of pesticide containers.

t’s been a whirlwind month for my team and me.  Beginning with my four captain’s picks, it was truly a special evening at The Woods Jupiter as we finalized the team. Making the selections was a very difficult process. We were spoiled with the number of quality golfers who had played well, especially lately. With the competition nearing, I was paying very close attention to how guys performed at the start of the new season and during the Asian Swing. “Wood” (Gary Woodland) was one of those guys who really did well. He will be the first to tell you that after winning the US Open, he didn’t finish last season the way he would have liked. However, after missing out on one of the automatic berths, he proved why he deserved to be on this team with top-5s in Korea (The CJ Cup at Nine Bridges) and Japan (Zozo Championship). And to have him with me at the restaurant for the announcement made it that much more special. This is going to be his first team event to cap off what has been a special year. He’s just a good dude that all the players wanted on the team.  Speaking of good dudes, Tony Finau is as genuine as they come and is going to be another key piece of the squad. He is one of those guys who is going to light up the team room but will back it up on the course with consistent play.  This is a guy who has qualified for the Tour Championship the last three years without a win, which is tough enough to accomplish once. It goes to show how reliable his game has been week in and week out, and that is exactly what this team needs. Everyone wants to play with Tony, so we are looking forward to having him.

I actually pranked Tony a little when I called to tell him he was on the team. I could feel his heart sink when I said I had some tough news. So, I let him sweat it out for a few seconds before welcoming him to the Presidents Cup. I couldn’t imagine this team going into battle without Captain America. Patrick Reed will be one of our team veterans competing in his third Presidents Cup. He’s is as fiery as they come and bleeds red, white and blue. That type of energy and passion is going to be very important as the away team. He is just one of those guys who is going to give you absolutely everything he has to earn a point for you. Finally, to become the Presidents Cup’s second-ever playing captain is a real thrill and an honor. Hale did it successfully back in 1994. I am looking forward to this being a challenging and rewarding experience. Once I didn’t make the Tour Championship, I knew the Zozo Championship was going to be a big event, and to perform the way I did after my knee procedure validated that I could play and help the team. Plus, to get my 82nd PGA Tour victory and tie Sam Snead’s all-time win record made the week that much sweeter.  I am really going to rely on my three assistants, Fred, “Strick” and Zach while I’m playing. With two of them having been Presidents Cup captains in the past, the team will be in good hands while I’m on the course.  It’s going to be hard work, but it is something I’ve been looking forward to for a long time. I’ve been a captain’s assistant in two Cups, so understanding what the various roles are is really going to help. Recently, I had to make a fifth captain’s pick following Brooks Koepka’s withdrawal from the event due to injury. Brooks and I talked, and he is disappointed that he is

unable to compete, but I just told him to get well soon and that we’re sorry he won’t be with us in Australia. That said, we are very happy to have Rickie Fowler join the team. He is someone we seriously considered for a pick and is so well respected and liked by his teammates. This will be his third Presidents Cup and I know he is excited to help us bring home the Cup. It’s hard to believe we are so close to going down to Royal Melbourne Golf Club. I want to congratulate

Ernie Els (International Team captain) on rounding out his team with Jason Day, Sungjae Im, Adam Hadwin and Joaquin Niemann. Going against Ernie and his team will be not be easy, especially with the outstanding Aussie fans supporting the International squad, but we’ll be ready. Till next time. Tiger Woods 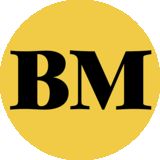