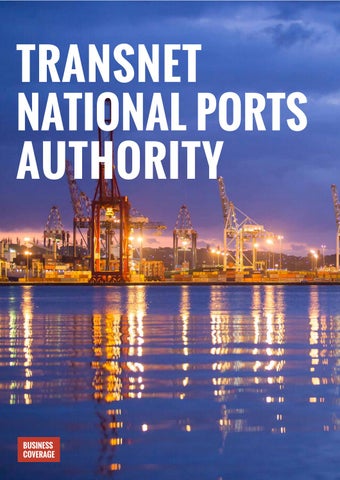 mid-tier platinum group metals (PGMs) producer, Royal Bafokeng Platinum (RBPlat) is a black-owned and controlled organisation listed on the JSE Limited, which operates the Bafokeng Rasimone Platinum Mine (BRPM) and is currently ramping up the Styldrift I Project, both of which are located in the North West province of South Africa. For a nation to thrive, it must be able to move goods freely and efficiently, with transportation and infrastructure acting as a crucial backbone to any successful economy or country. Transnet SOC Ltd (Transnet) represents such a vast logistical network for South Africa. A public company owned by the state, Transnet operates as a corporate entity, aiming to develop and support the countryâ&amp;#x20AC;&amp;#x2122;s freight logistic network efficiently and profitably. Forming the largest and most crucial part of the freight logistics chain in South Africa, it ensures goods are delivered to every

South African, processing thousands of tons of goods both to and from its ports. Delivering such services and facilitating the movement of cargo for import and export is integral to the economic growth of South Africa. TRANSNET NATIONAL PORTS AUTHORITY (TNPA) Transnet National Ports Authority (TNPA) is one of five operating divisions of Transnet. It provides port infrastructure and maritime services at the eight South African commercial seaports and operates within a legislative and regulatory environment created by the National Ports Act 2005. Its existence is imperative as it is responsible for the overall economic functioning of the national port system, which it manages in a landlord capacity. TNPAâ&amp;#x20AC;&amp;#x2122;s operations are in line with the provisions of the National Ports Act, to ensure the national port system operates safely, effectively and efficiently which

in turn aids the country’s economy. Its core functions therefore range from planning, maintaining and improving port infrastructure to assisting with navigation and manoeuvring vessels. TNPA’s service offering is targeted at mainly port users, ranging from terminal operators, ship agents, cargo owners and forwarding agents. Its reach is substantial spanning almost 3,000 km of coastline across eight commercial seaports. It can manage its service offering effectively by dividing its operations into two categories, the provision of port infrastructure and the provision of maritime services. GATEWAY FOR TRADE Whilst its offering of Port Infrastructure forms an overarching category, it is not a small task. The company provides this service across five commodity sectors and seeks to continue enhancing its role in facilitating trade, influencing growth and aligning its core activities

to changing market dynamics. It acts as a leading gateway for trade and currently provides port infrastructure for containers, dry bulk, liquid bulk, break bulk and the automotive sector. Covering products from coal and copper to fruit and fish, TNPA’s operations are likely to impact most industries in the country. In line with the wider Market Demand Strategy at Transnet, TNPA has embarked on an extensive marketing campaign. The organisation has recognised it is able to enhance its ports’ geographical positioning to benefit from trade originating from the eastern and western seaboards. The strategy aims to meet the growth demands of the South African port system through focusing on delivering progress in three primary areas: - Timely delivery of capital investment projects - Improved efficiency in port services to promote productivity - Revenue growth and cost

effectiveness Similarly, TNPA’s parent company Transnet, which also controls freight rail, rail engineering, port terminals and pipelines also aims to achieve its goal of fuelling economic growth in South Africa by increasing its market share, improving productivity and profitability by providing appropriate capacity to its customers ahead of demand. ALL ABOARD Growth is not just a target though; its plans are coming to fruition through delivering projects that it anticipates will aid its growth. Most recently, A

R100-million partnership between TNPA and Tide Marine Shipyard was formed. The black woman-owned shipbuilder, Tide Marine Shipyard, is designing, manufacturing, assembling and commissioning an exciting new vessel for TNPA. It aims to bring new life to Nelson Mandela Bay’s boatbuilding industry and the vessel will revitalise the current dredging methods used by TNPA. Construction of the new plough tug will shortly be relocated to Port Elizabeth’s recently upgraded 40 t slipway and boat hoist in the Yacht Club precinct. The yetto-be-named vessel, is expected to be

A Ready Business is driven by the connected revolution Thereâ&amp;#x20AC;&amp;#x2122;s no turning back. The Internet of Things (Machine-to-Machine Communication) puts business on the road to maximum performance and efficiency via the constant flow of information. Become a Ready Business today. vodacombusiness.co.za

Vodacom Power to you

handed over by October 2018 and will be used as a bed-leveller, smoothing out high spots created by marine traffic in high-volume berth areas. Being awarded the contract is a big turning point for Tide Marine Shipyard, having successfully secured the bid following a stringent tender process. “This project will go a long way towards revitalising Nelson Mandela Bay’s boatbuilding sector and we are grateful to Transnet for the trust they have placed in a smaller, but well-established player in the industry,” Fabian Crocker, general manager at Tide Marine Shipyard said. The vessel will be the first of its kind and revolutionise the way TNPA manage its dredging services. Boasting the latest global technology, it will be able to sail from port to port. Its small size will also enable it to be guided into more confined spaces than other tugs. General manager for Infrastructure &amp; Port Planning at TNPA, Hamilton Nxumalo commented: “This is the dream of an ocean economy being realise. Catering for larger commercial vessels in our ports requires a world-class dredging and marine fleet – and South African shipbuilders continue to demonstrate their expertise in producing vessels that can compete with the global industry.” The project is great news for the economy too, Crocker is committed to sourcing the 200 t of steel to be used in construction from South Africa and expects 30 jobs to be created in technical fields such as engineering,

boiler making and welding. “We will also be upskilling local marine engineering students with on-site experience so that learnings from this project can continue to serve the industry long after completion,” he added. Whilst Naval architecture firm Naval Africa will provide technical expertise and quality assurance on the project to support Tide Marine Shipyard. It is the production of such vessels that enable TNPA to accommodate large vessels and compete globally, the organisation recognises it must diversify and innovate to remain a global player and it is set to continue to grow as a result. THE HELM OF THE SHIP Shulami Qalinge took up reins as Chief Executive of the Transnet National Ports Authority (TNPA) on 1 July 2017, succeeding Richard Vallihu. During her career spanning more than 20 years, Qalinge has developed her skills in operations, strategic planning, performance monitoring and diagnostic and project management. She has a strong focus on Rail and Port Operations, Supply Chain Management, Performance Monitoring and Reporting and Stakeholder Management. As Chief Executive of TNPA, Qalinge is one of South Africa’s leading operational executives and oversees the operation of eight commercial ports, Richards Bay, Durban, East London, Ngqura, Port Elizabeth, Mossel Bay, Cape Town and Saldanha.