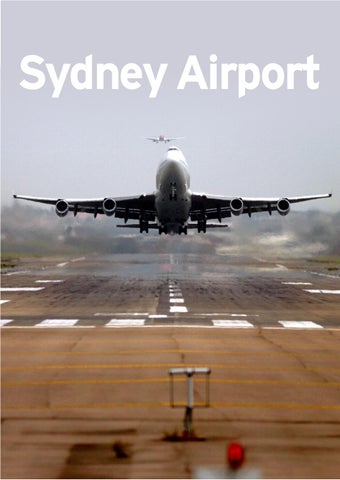 o some generations, travelling Down Under would have been considered a pipe dream. Today, it is more possible than ever before to access the planet’s largest island. In fact, Australia’s biggest airport, Sydney Airport was used by almost 40 million passengers across 45 airlines in 2015. Operating both domestic and international travel, it offers direct services from Sydney to 28 countries and greets 40% of all international passengers in Australia. Regarded as one of the most vibrant cities in the world, Sydney and its Airport act as a gateway to the country. Forming an essential part of Australia’s economy, Sydney Airport recognises that facilitating trade and travel efficiently is vital to the nation’s prosperity. Situated just 8KM from Sydney’s central business

district, the Airport is well placed for convenient transport to the city by both road and rail. As well as the biggest airport in the country, Sydney Airport is one of the oldest continually operating airports in the world. Introducing regular air services between Sydney, Melbourne and Adelaide in the mid-1920s, Sydney Airport was initially controlled by the Australian Government. By 1965, the International Terminal construction had commenced and Sydney Airport was eventually privatised by the Australian Government in 2002. With a vision to deliver a world class airport experience, Sydney Airport is one of the most important transport infrastructures in the country. Its growth not only benefits Sydney but also New South Wales and Australia as a

whole. A major employer in the region, the airport makes a significant contribution to the economy by generating $30.8 billion in economic activity annually. Equivalent to 6.4% of the New South Wales economy, its operations translate into more than 52,890 direct jobs and results in 258,000 jobs in freight and tourism for the people of Sydney. Terminals taking off With three passenger terminals, Sydney Airport offers international and domestic flights that allow up to 40 million passengers to travel every year. Terminal 1, an International Terminal, handles more than 12 million passengers annually

from overseas. With Australia being the sixth largest country in the world, domestic common users make up a huge number of passengers for Sydney Airport too. Terminals 2 and 3 service such domestic routes with regional airlines including Jetstar, Virgin Australia, Regional Express and many more are based at Terminal 2. Currently, Terminal 3 is operated by Qantas Airline and used for both Qantas domestic and Qauntaslink regional flights. With an additional seven cargo terminals controlled by five cargo terminal operators, approximately 80% of freight is carried in the holds of passenger aircraft with the remainder transported in dedicated freight aircraft. Handling around 517,000 tonnes of air freight annually, 408,000 of which is international air freight, Sydney Airport manages more than half of the total aircraft freight in Australia. Going places In recent years, a number of improvements and changes have been made to the airport; from Terminal 3â&amp;#x20AC;&amp;#x2122;s ownership agreements with Quantas Airline to new retail stores and improved car parking. As always, it is the passengers who remain a priority for Sydney Airport as is evident in its dedication to offer continuous superior service. As with industries across the globe, technology is changing the way consumers behave and what they expect from a service provider. Air travel is no exception and Sydney Airport is innovating to ensure it continues to advance. Modernising the way its passengers engage, Sydney Airport has used technology to improve the passenger experience in ways that would have once been considered unachievable. With 63 self-service check-in kiosks at T1,

including 26 wireless kiosks, customers receive operational flexibility and convenience. Other innovations include automated bag drops and being the first airport in Australia to install outbound SmartGates in partnership with the Government. These 23 new SmartGates have significantly improved passenger processing time by making the outbound border clearance procedure up to 32% faster. Such improvements have enabled Sydney Airport to streamline the customer journey and make travel easier and quicker than ever. In order to analyse queue wait times, resource planning and optimisation, Sydney Airport has implemented a new system in outbound security to measure performance. It continues to use such data to manage demand and deploy staff accordingly to key areas in the terminal; this has resulted in better responsiveness and productivity during busy periods. With its digital strategy acting as a key performance indicator of its passengerâ&amp;#x20AC;&amp;#x2122;s satisfaction, Sydney Airport is able to explore ways of improving customer service through centralising, managing and sharing its data across the organisation. In the first partnership of its kind for an international airport, Sydney Airport is collaborating with the worldâ&amp;#x20AC;&amp;#x2122;s largest travel site, TripAdvisor, to provide tailored destination content for travellers at the airport. This has made information available to its customers such as online destination guides and reviews, digital gate signage and a hotel booking widget. Recognising the demand for internet access, Sydney Airport has upgraded its free Wi-Fi service, increasing its speed and efficiency and helping passengers to easily and quickly access airport information throughout their

journey. In addition, it has improved the in-terminal digital platform with enhanced Wi-Fi and engaging information such as news, retail offers, competitions and flight details delivered to passengers on digital screens and devices. Sydney Airport has also installed dynamic wayfinding e-directories to help passengers make their way through the terminal. These improvements will enable 5.2 million free Wi-Fi sessions at T1 and T2. Embracing the technological era, Sydney Airport also welcomes 450,000+ visits to its website every month, engages with 100,000+ followers on its social media platforms and enjoyed 78,000 app downloads last year.

Cruising ahead With a clear strategy for growth and a customer commitment focus, Sydney Airport shows no signs of slowing down. It embraces its position as the countryâ&amp;#x20AC;&amp;#x2122;s largest Airport and recognises its ability to progress on the ground as much as in the air. The organisationâ&amp;#x20AC;&amp;#x2122;s impressive dedication to introducing technological advances highlights its ability to continue leading the way for air travel. With over 50 years of experience in international passenger travel, the only turbulence that Sydney Airport has to worry about is at altitude.