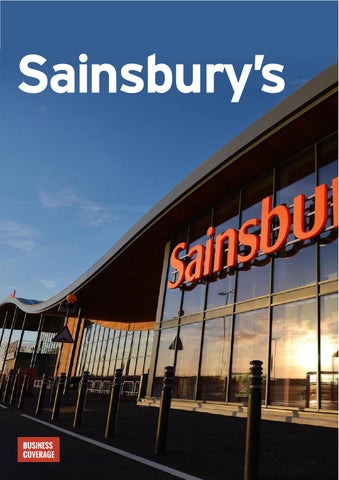 ding founding values dear in becoming one of the UKâ&amp;#x20AC;&amp;#x2122;s largest retailers

t was once said that the more things change the more they stay the same, but in 1869 change was crucial, and this led to John James Sainsbury and his wife Mary Ann Sainsbury opening their own store in London. A store that provided people with groceries that they could trust and afford. Almost 150 years on and that store has grown to become one of the UK’s largest retailers. Today Sainsbury’s operates over 1,200 supermarkets and convenience stores and employs over 160,000 colleagues. While a lot may have changed at Sainsbury’s since 1869, one thing has stayed the same: its values. Leadership Day-to-day management of the Group is delegated to the Operating Board, which is chaired by Mike Coupe, the Chief Executive. He is responsible for the management of the company, and executing the strategy agreed by the Board. He creates a framework of strategy, values and objectives to ensure the successful achievement of results, and allocates decision-making and responsibilities accordingly. Coupe joined Sainsbury’s from Big Food Group where he was a Board Director of Big Food Group plc and Managing Director of Iceland Food Stores. He previously worked for both ASDA and Tesco, where he served in a variety of senior management roles. Live weLL for Less Sainsbury’s promise to help customers Live Well for Less is about more than just price. Sainsbury’s has a number of sustainability commitments. These commitments address

important challenges and opportunities, so they deliver longterm value and values for customers, suppliers, colleagues and stakeholders. Sainsburyâ&amp;#x20AC;&amp;#x2122;s aims to lead the way with less, by becoming a grocer that wants to provide healthier products, by putting less salt, less sugar and less allergens in its foods whenever possible. Less waste, less impact on the environment, and in this case less is more. More recycling, more food donation partnerships, more ways to make your food go further. sustainabiLity Sainsburyâ&amp;#x20AC;&amp;#x2122;s undertook customer research over a 12-month period which revealed British families believe they threw away 10 meals per month, when in fact they waste more than four

times that amount. Over four million tonnes of edible food is binned annually in the UK, yet more than 80% of UK families are under the impression they waste little or no food. The YouGov research which revealed the “food waste gap” showed that families believe they are wasting no more than £30 a month, but are actually throwing away foodstuffs worth £58.30 per household. Sainsbury’s launched its £10 million Waste less, Save more initiative to radically reduce household food waste on the back of this research. The retailer’s five year programme to tackle food waste kicked off in January 2016 in Swadlincote, a market town in Derbyshire which beat applications from 188 other UK towns and cities to be Sainsbury’s test-bed food waste reduction town. Over the next 12 months the retailer will invest £1million in the area to test the latest innovations in an ambitious bid to cut household waste by 50%, equating to a saving of £350 per household. The target to halve food waste is in line with UN Goals to be achieved by 2030. The launch will see a number of innovative ideas including fridge thermometers, smarter kitchen appliances and the Olio food sharing app being trialled. Swadlincote is the first place outside of London where the free Olio app is available, allowing neighbours, friends and cafes to share surplus or unwanted food by posting pictures of it online and enabling those who can use it to get in touch. Further technologies designed to help customers enjoy food for longer will be introduced during the year-long project; and findings from the year-long trial in Swadlincote will be used to create a blueprint for towns and cities across the UK. Paul Crewe, Sainsbury’s Head of Sustainability, said: “Food

waste is one of the biggest issues facing us all today and with households unaware of just how much food they are binning there is a huge food waste knowledge gap. Customers have told us that food waste is their number one concern which is why starting today we’re investing £10million to tackle it. “Our target to help Swadlincote halve its food waste is very ambitious but with the support of the community and a bank of great ideas to test we believe we can help people change their habits. If we’re successful households will save £350 per year.” an environment where coLLeagues Love to work Sainsbury’s is committed to providing competitive pay and benefits to its colleagues. By 2020, its aim is to exceed the

National Living Wage proposal of £9 per hour and addressing the gender pay gap. Sainsbury’s engages colleagues in the long term success of the business, and is committed to investing in industry leading training and development for all colleagues. Sainsbury’s efforts were recognised by 75 per cent of colleagues who voted Sainsbury’s as a great place to work in our 2014/15 engagement survey. Furthermore, Sainsbury’s became the first food retailer to be awarded Gold accreditation by Investors in People in 2010, an accolade it continues to retain. The commitment and talent of Sainsbury’s colleagues is critical to success. They have been influential in the company’s engagement with local communities, by supporting charitable causes and initiatives like the Local Heroes scheme.

Last year, Sainsbury’s awarded 137,000 colleagues working in stores across the country an industry-leading pay increase. Mr Coupe said: “We’re delighted to announce a 4% pay increase for the colleagues who work in our stores across the country. “We know what a difference they make to our customers each and every day and we’re totally committed to rewarding them well for the great service they provide. I’ve talked to thousands of colleagues over the past year and they tell me how much they value their package of benefits and the flexibility that we can offer as an employer, as well as hourly pay which has always been well over the minimum wage. Their hard work, talent and dedication have been central to our success and will remain so in the future.”