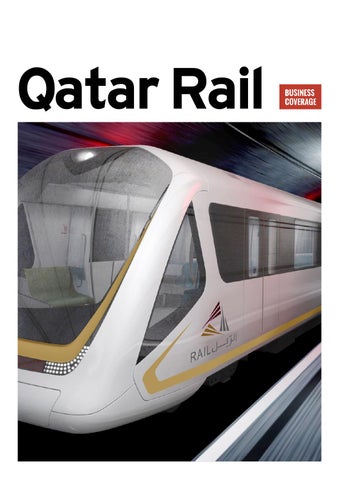 enefiting from the highest per-capita income and lowest unemployment rate in the world and with proved oil reserves in excess of 25 billion barrels, as well as possessing 13% of the worldâ&amp;#x20AC;&amp;#x2122;s total natural gas (third largest proved reserves in the world), Qatar has continued to prosper in recent years. Its growth requires improved transportation for the developing nation. Furthermore, Qatarâ&amp;#x20AC;&amp;#x2122;s successful 2022 World Cup bid is accelerating large-scale infrastructure projects. To accommodate this growth, Qatar Rail was established by Emiri decree in 2011 with

three major projects to get on track: The Doha Metro, The Lusail Light Rail Transit (LLRT) and The Long Distance Passenger and Freight Rail. The Doha Metro project: The most prominent and visible project for Qatar Rail, the Doha Metro, will serve both the capital and the suburbs of the country, making all major locations convenient to reach. Building a state of the art metro service requires equally modern methods, using specialised Tunnel Boring Machines (TBM) to dig underground stations; the metro system will be built in two phrases. Initially, the first phrase will involve Qatar Rail

constructing three of the four underground lines to be known as Red, Gold and Green as well as 37 stations. With more than 50km underground, the Doha Metro project entails a great deal of construction, with the first three lines expected to open to the public in late 2019. More major work will begin during the second phase which comprises of expanding the phase one lines and adding another one, the Blue Line, which will boast an additional 72 stations. Clearly taking their objective to provide a reliable and excellent rail system seriously, the second phase is expected to be completed in 2026 with the Red; Green and Gold lines all

meeting at the heart of the Doha Metro in the largest station, Msheireb. The Doha Metro will have the capacity to transport 60,000 passengers a day; it’s aiming to reduce the number of cars on the road by 17,000 and has the potential to save 100 tonnes of CO2. Recognising the importance of both the stations’ practical and cultural sides to any metro system, Qatar Rail’s stations will architecturally reflect the heritage of the country. This will be achieved by designed all stations in a contemporary ‘vaulted space’ concept; reflecting the country’s heritage by creating open spaces that emulate traditional Bedouin tents.

Bombardier Transportation, a global leader in rail technology, offers the broadest portfolio in the rail industry that covers the full spectrum of rail solutions from the manufacture of passenger rail vehicles, to the provision of complete rail transportation systems &amp; system integration, signalling, propulsion &amp; control technology, asset management and through life support with local engineering and manufacturing. Bombardier Transportation, a division of Bombardier Inc, has an installed base of over 100,000 vehicles worldwide and with over 60 systems in operation around the globe; Bombardier is highly proven to deliver turnkey transportation systems.

Looking far ahead while delivering today, Bombardier is evolving mobility worldwide by answering the call for more efficient, sustainable and enjoyable transportation everywhere. Our vehicles, services and, most of all, our employees are what make us a global leader in transportation.

Long Distance: Not only aiming to connect Qatarâ&amp;#x20AC;&amp;#x2122;s residents to its regions, The Long Distance Passenger and Freight Rail will serve to connect residents to population centres in the rest of the Gulf Cooperation Council (GCC) which encompasses countries such as Saudi Arabia, Bahrain, Kuwait, the UAE and Oman. As well as helping to create an easy and convenient transport link for the GCC, the rail network will have beneficial consequences on the countryâ&amp;#x20AC;&amp;#x2122;s environment by replacing the need for countless cars and trucks to make the same trip that this new and efficient line will offer.

With plans to eventually cover a distance of 350km, the Long Distance line will be developed in distinct stages with phase 1 consisting of almost 143km of operational railway track. Consisting of five main lines, the Long Distance Passenger and Freight Rail Network will have one freight line, one high speed passenger train line from Doha to Bahrain and three lines that combine passenger and freight transportation. The four phases involved consist of in-depth construction works from bridges, freight yards and stations to installation and integration of equipment. Expected to be completed in 2030, this line will also bring numerous economic,

environmental and social benefits to Qatar. Lusail Light Rail Transit: Just north of Doha sits Lusail City, a visionary waterfront development that is currently under construction to become an environmental and self-sustaining community. Lusail cityâ&amp;#x20AC;&amp;#x2122;s design includes residential and commercial developments including schools, medical facilities, shopping centres and more. The Lusail Light Rail Trainsit (LLRT) network will operate to serve its cityâ&amp;#x20AC;&amp;#x2122;s residents in the form of an environmentally-friendly, safe and modern mode of transport. The LLRT will not only connect destinations with Lusail City but will also make

Doha easily accessible by way of the Doha Metro. Consisting of four lines and measuring 38.6km, the LLRT will have 25 stations at-grade in various configurations. Seven of which will be underground stations, it will also have one viaduct to accommodate LRT passengers with the regional railway, an LRT depot, operation, maintenance and storage facility and a test track. Expecting to arrive at completion of all three projects by 2030, Qatar Rail aims to have the networks acting as one sustainable and efficient integrated system for both its growing population and its transportation of freight. This extensive plan of construction clearly involves a lot of initial work but Qatar Rail is on track to achieve their vision of becoming the favoured mode of transport for all. The company is responsible for developing the railway sector framework from safety procedures to strategies and managing costs to delivering the projects on time, whilst integrating the network with pre-existing modes of transport. Qatar Railâ&amp;#x20AC;&amp;#x2122;s mission is to provide integrated railway services that are reliable, attractive and safe with continual commitment to excellence and sustainability. Based on its systematic stepped approach to achieve this, it will have transformed the transportation sector in Qatar within 15 years if all goes to plan. Through its shared values of integrity, passion, accountability, respect, collaboration and responsibility, Qatar rail is aiming to achieve a number of goals. Its strategic objectives are: Programme delivery: Deliver the rail program of desired quality in a cost effective and safe manner, on time.

Attractiveness &amp; sustainability: Provide customer centric integrated railway services that are accessible, efficient, competitive, comfortable safe and reliable whilst maximising social, economic and environmental benefits. Reliability &amp; excellence: To operate and maintain a robust and stable railway service that meets the expectations of its customers and partners whilst following international best practices for safety, security and health. Employer of choice: To position Qatar Rail as the employer of choice in Qatar and globally within the rail industry. Business viability: To conduct activities with focus on creating value for stakeholders and maximising returns on investment. With clear goals and the distinct planning that is going into the Qatar Rail projects, it is fair to say the company’s future is on track. Making its way to ‘State-Of-The-Art Station’, Qatar Rail and Qatar’s transportation sector as a whole, is certainly one to watch. The man behind the wheel: In charge of driving the organisation and planning the route for Qatar Rail’s future is Abdulla Abdulaziz Al Subaie, Managing Director of Qatar Railways Company since March 2011. As Managing Director, he is responsible for overall leadership and direction in developing Qatar’s rail industry in line with the Qatar National Vision 2030. Abudlla Abdulaziz Al Subaie was the Group Chief Executive Officer of Barwa, Qatar’s leading real estate development and investment holding

group from 2011 to 2014. During which time, Barwa accomplished a significant turnaround. Under his leadership, Barwa was transformed and positioned to achieve sustainable growth. Prior to Barwa, Abudlla Abdulaziz Al Subaie was Chief Executive Officer of Smeet, an affiliate of the Qatari Diar Group and was with the company from its formation in 2008 until March 2011, when he joined Qatar Rail. A Qatari national himself, Abudlla Abdulaziz Al Subaie was born in 1975 and achieved a Masters in Business Administration (MBA) in 2006 from Qatar University. He held various other leadership and senior project management positions within the Qatar General Electricity &amp; Water Corporation and serves on the Boards of many high profile Qatari organisations. Deservedly, Abudlla Abdulaziz Al Subaie was recognised for his outstanding accomplishments in 2012 when he achieved the award of â&amp;#x20AC;&amp;#x2DC;Master class CEO of the yearâ&amp;#x20AC;&amp;#x2122; during the 3rd Middle East Leadership Summit &amp; Awards.