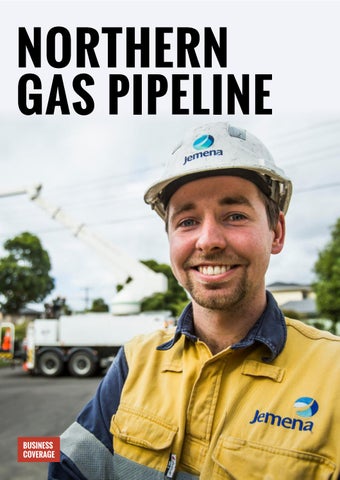 NORTHERN GAS Tapping into the Territory

hen you’re managing a project that covers hundreds of kilometres and stretches from one Australian territory into the neighbouring state, there’s likely to be a few challenges along the way. But the sheer complexity of the project has also proven to be one of its most satisfying and unique elements according to the company responsible for constructing the $800 million Northern Gas Pipeline. The ProjecT The 622km Northern Gas Pipeline will connect the Northern Territory’s vast gas fields to the east coast gas market via a buried pipeline, which will stretch from

Tennant Creek in the Northern Territory to Mount Isa in Queensland. The project began in 2014 when the Northern Territory Government initiated a competitive tender process to build and operate the North East Gas Interconnector (NEGI). Two routes were assessed by companies tendering for the project, with the ‘northern route’ from Tennant Creek to Mt Isa identified as the most efficient and lowest risk option to transport gas to the east coast. In late 2015 the tender was awarded to Asian conglomerate Jemena, which already owns and manages more than $10.5 billion worth of Australian gas, electricity and water assets.

After an 18-month consultation, planning and design process, advance construction began in May 2017, with an official sod turning following in July. Around 250km of pipeline is expected to be completed this year in the Northern Territory by major contractor McConnell Dowell, with a further 140km being built in Queensland by Spiecapag Australia. The remainder of the Northern Territory section is scheduled to be built in 2018. Civmec will undertake civil works at the Phillip Creek Compressor Station (PCCS), with additional contractors for the balance of the construction at Phillip Creek, as well as the Mt Isa Compressor Station, still to be announced. Both stations are expected to be built this year, with the overall construction phase of the pipeline project likely to take around 12 months to complete. This will be followed by a period of testing and commissioning, with the first gas expected to flow late in 2018. FeaTures and caPaciTy The Northern Gas Pipeline project includes the construction of two compressor stations, associated infrastructure and 622km of buried pipeline. A total of 33,248 lengths of 18.5m coated line pipe will be required for the project. It took more than eight months of preparation and transportation to stockpile the pipe on a site outside of Tennant Creek, with more than 30 locals employed to oversee its arrival and stack

it safely in place. The pipeline is expected to transport 90 terajoules (TJs) of excess gas from the Blacktip field in the Northern Territory to Mt Isa each day, however it has the potential to be expanded to cater for increasing demand should more gas reserves become available. The capacity of the 12” diameter pipeline can be increased relatively quickly using a looping/compression method, with modelling completed by Jemena suggesting it could be capable of transporting up to 700 TJs daily. Jemena Media and Brand Manager Michael Pintabona said the pipeline had the potential to meet the well-documented shortfall in the supply of domestic gas to the eastern states of Australia. “The Northern Territory is well placed to develop the gas reserves to meet this shortfall on the east coast of Australia due to its existing onshore resources located in the Amadeus basin in Central Australia and other gas basins that are yet to be commercialised,” he said. “This includes the recent discovery of significant volumes of gas (6.6 trillion cubic feet contingent resources) in the Beetaloo sub-basin by Origin Energy (in partnership with Falcon Energy and Sasol Petroleum Australia Limited). “The Northern Gas Pipeline will be the primary channel for Northern Territory gas to reach domestic and offshore markets, and can be extended and scaled up

quickly to cater for far higher volumes of gas. “In 10-20 years we envisage the expanded and extended Northern Gas Pipeline being a major supply channel bringing significant quantities of gas from the Northern Territory to both southern domestic markets and offshore markets through Wallumbilla, in sufficient volumes to mitigate the high consumer prices of 2017. “This gas production will be a major industry bringing prosperity to the Northern Territory.” consulTaTion Process It’s little wonder that a project of such scale and complexity required an equally extensive consultation process. Mr Pintabona said consultation has been undertaken and continues with stakeholders including governments, Traditional Owners and representative bodies, pastoralists, industry groups, local and regional communities, business owners and service providers, and other interested parties. “The unique feature of this project, and probably its biggest challenge, was the need to work with many stakeholders and multiple jurisdictions for environmental, cultural and social approvals, and land access – while also keeping in mind tight customer timelines,” he said. “Areas of discussion when developing the Northern Gas Pipeline included environment, cultural heritage, route selection, social, economic development, jobs and training, and local contracting opportunities.”

Mr Pintabona said the company invested a lot of time and resources into the consultation process, working with the Traditional Owners and Land Councils to finalise field survey works, cultural heritage management plans and land access. indigenous and communiTy Focus Jemena’s engagement with the Indigenous and local communities doesn’t end with the consultation process however, with the company focused on maximising the project’s benefits through training, work experience and skill development for locals, increasing

organisations in the Barkly and Mount Isa regions have provided goods or services to the Northern Gas Pipeline Project, and more than 150 jobs have been generated for residents in these regions either directly with Jemena or through its contractors. “We have a particular focus on Indigenous participation on the Northern Gas Pipeline Project. We are working closely with all our contractors to deliver on this commitment.” The company is implementing a number of programs and strategies to facilitate its aims, including the Project Ready Training Program, which has provided 58

Aboriginal people with formal training as part of a Certificate II in Resources and Infrastructure Work. The company also part-funded training for another 14 local Aboriginal people, who are undertaking a Certificate I in Construction Pathways and a Certificate I in Conservation and Land Management, while the Tennant Creek Social Employment Project provided work and training for nine local people over a 12week period. social iniTiaTives The pipeline project is delivering more than just employment and economic benefits, with Jemena also engaging with and supporting local cultural activities within the region. This has included enabling young Aboriginal women in years 9, 10, and 11 from the Tennant Creek area to participate in a series of workshops earlier this year, which focused on resume writing and job

interview techniques. Facilitated through a partnership with the Stars Foundation in the Northern Territory, Jemena employees acted as mentors during the workshops, offering advice, support and constructive feedback. The company has also provided support to the Arlpwe Artists Aboriginal Corporation, which runs the Art and Cultural Centre in Ali Curung, 170km south of Tennant Creek. Mr Pintabona said Jemena takes its role in the community seriously and works hard to ensure their projects â&amp;#x20AC;&amp;#x153;deliver not only for Australian energy consumers, but also for the communities surrounding our operationsâ&amp;#x20AC;?.