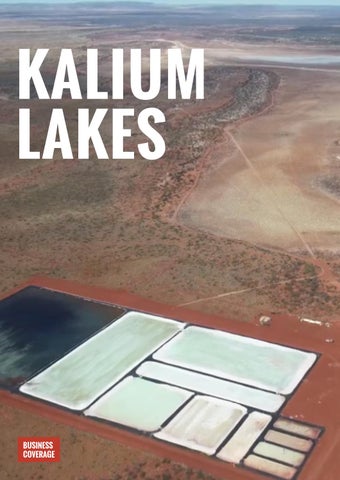 A LEADER IN AN EMERGING NATIONAL INDUS

BEYONDIE SULPHATE OF POTASH PROJECT Australian potash mines are still in their infancy, with Kalium Lakes set to begin commercial production of its Beyondie sulphate of potash project (BSOPP) in Western Australia later this year. Creating more than 170 jobs whilst under construction and 70 operational roles the Beyondie project has a mine life of over 30 years; providing a major boost for local regional communities and cementing Kalium Lakes’ position as a nationwide leader in the potash industry. Sage one of the project - which proposes to produce 90,000 tonnes of Sulphate of Potash (SoP) per annum and ramp up to 180,000tpa for local and

international sale - represents only 21% of the project’s 30,225 hectares total lake surface area. Stage two covers 23,856ha of salt lakes. Managing director Brett Hazelden said there was “significant potential” in stage two to include the material below the top two metres in an updated declared mineral resources. “While we continue to focus our efforts on developing the stage one area to become the first SoP producer in Australia, it is important for our current and future investors to recognise the potential that stage two offers which has almost four times the lake surface area of stage one.” Kalium Lakes has a binding agreement with Germany-based global fertiliser giant

K+S to distribute and sell its SoP products in Australia and overseas. PROVIDING LOCAL SOP Despite Australian farmers consuming an estimated 250,000 tonnes of potash each year, there are currently no local producers. ‘Currently SOP is coming from Russia, Canada, and Germany … so that means they won’t have to pay the freight to come all the way from the other half of the world.” Farmers themselves are paying about $1,000 a tonne at the farm gate at the moment, so with any luck we’ll be at least a few dollars less than that,” Hazelden explains. For many Australian growers, potash

fertiliser is considered a vital input due to soil quality and farming practices. Crop farmer Sam Defrenne from Grass Patch, 80km north of Esperance, has been trialling a SOP product to increase potassium in his sandy soils. “With 100 per cent cropping now we are mining [the soil] a bit,” Defrenne said. “So we’re trying to find out how to get a better yield.” Defrenne says trials had found as much as a 30 per cent improvement in yields from using SOP compared to an imported muriate of potash (MOP) product. “At the end of the day we’re trying to grow crops and keep them all there, so we’re looking for yield and to get the best product to do the best job.”

“Our mission to supply Aussie farmers with locally produced SOP remains as strong as ever, with first production scheduled for around this time next year,” Brett Hazlden

SUPPLIER ENGAGEMENT Kalium Lakes has awarded a number of key contracts for the engineering, procurement, construction management and commissioning associated with the development of the Purification Plant facilities for its Beyondie

contract has been executed with DRA, with the company taking the lead on overall BSOPP development and commissioning. German engineering company Ebtec will supply the process plant and provide equipment installation supervision, followed by the commissioning of the plant. Ebtec’s contract includes performance guarantees to ensure the quality of SOP production is in line with the requirements of the K+S Offtake Agreement and includes liquidated damages for performance and schedule. The contract also includes a bonus arrangement. Jaylon Environmental Systems will supply and install evaporation pond liners for the project. The sheet plastic specialist, known for its suite of industrial products such as geomembrane landfill and dam liners, rainwear and tarpaulins, will provide one-millimetre thick HDPE

covering over a roughly 400-hectare evaporation area at the site. Kalium Lakes chief development officer Rudolph van Niekerk said the company’s plan for a lined pond design would allow for harvesting “months, if not years” ahead of other alternatives. “The use of Jaylon during the pilot scale trials continued to validate Kalium Lakes’ de-risking strategy, where we work collaboratively to develop bespoke, low cost and fit for purpose solutions for the project.” “The use of an evaporation pond liner has been a much debated topic. For Kalium Lakes, the cost of the supply and installation of the liner represents less than seven per cent of the project’s total capital cost but results in an increased SOP process recovery of more than 15 per cent.” A construction contract with Firm Construction has also been awarded for various construction services.