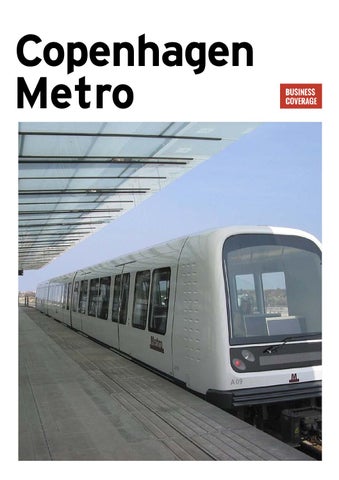 openhagen is one of the most cosmopolitan cities in Scandinavia. The Danish capital is now bursting with more restaurants and cafes than ever. As Denmark’s most popular tourist destination, it’s enjoyed a growing number of visitors sampling stunning beauty with its cobbled squares, canals and copper spires defining the cityscape. Copenhagen is proud of its status as one of the world’s most liveable cities, thanks in part to its excellent public transport, aided by the latest introduction to trains and buses, the Metro, in 2002. The Copenhagen Metro has two lines which run from Copenhagen Airport and Vestamager to the centre of the City and which continue to suburban Vanløse. In total the Metro network now runs through 21 kilometres of Copenhagen and Frederiksberg, calling at 22 stations en route. At five stations (Vanløse, Flintholm, Nørreport, Ørestad and Lufthavnen) there are connections to the S-Train and regional rail networks. The driverless trains run frequently throughout the day, sometimes as often as every three minutes. Sundays to Thursdays between midnight and 5am the metro operate a less frequent service with trains running every 20 minutes or so. With tourism a huge source of income for the city, the Metro is perfect for visitors landing at Copenhagen Airport, with a journey time from there to the centrally located Nørreport Station of about 15 minutes. The operation and maintenance of the Metro is handled by Metro Service A/S.

ALL IN THE DESIGN The Copenhagen metro benefit from trains designed for practicality, safety and also comfort. The metro are served by 34 trains, each with three fully accessible cars. The seats face each other except at the ends of the train where they are in rows so passengers can look out of the large front windows in roughly a third of the available capacity. There are four large ‘flex zones’ with folding seats along the sides, providing space for wheelchairs, prams and bicycles. “In designing the train, the intention was to make the trains pleasant to look at, as well as easy to clean and maintain,” says the Metro’s website. “None of the panels have sharp corners or dirt-collecting gaps, and since all the seats are wall-mounted, the floor is free of support legs. This makes it easier to clean. All interior

Renesco‘ specialists can be found today providing expert services for all kind of waterproofing, grouting and injection for the new Metro Copenhagen. www.renesco.com

A considerable number of Renesco*s specialists are at work on building the waterproofing of the new City Ring for Metro Copenhagen since 2013 until 2016. Renesco has to seal 21 metro stations, which on an average extend down vertically 30 metres, against water pressure up to 3 bar. It will take years to line - watertight - a total surface of 150‘000 m² with 600‘000 kg of material. Renesco is supplying a waterproofing system based on FPO-geomembrane as well as with HDPE-Material including pump wells, flower-boxes, piles etc. and provided also the compartment and injection system. Installing the sealing in Copenhagen Metro presented some exceptional challenges above ground as well as below. Renesco‘s CEO Per König: „Sometimes we have to work at six installation sites at once. This is logistically not easy as for traffic reasons the city hardly permits any construction areas—not even for its own subway.“ Nevertheless the waterproofing works are progressing smoothly. Demanding construction sites like Metro Copenhagen made Renesco one of the leading companies for waterproofing and injection. www.renesco.com

furnishings and technical equipment are easy to access enabling quick replacement at the workshop.” For safety, cameras are mounted in all cars and connected to the control room where staff can see selected areas of the train. If a call is made from a call point, the system switches to a camera that shows who is pressing the call button to provide extra security to the user and reduce misuse. The design of the stations has also been carefully considered to reflect the fact that the Metro will have a long service life. With this in mind, the buildings have been designed to blend in with and enhance its urban surroundings – both in the existing city and the new Ørestad. The classic, fundamental design has been combined with functionality to provide smoothly operating Metro stations that give passengers ideal access conditions from street level to platforms. The nine underground stations are visible at ground level via elevator towers and glass pyramids. This is to allow daylight to flow all the way down to the platform below, creating a pleasant natural light that also saves energy. Eleven kilometres of the line are on embankments or elevated sections and the 13 over ground stations are structures using a mix of glass and steel, resembling the tunnel stations in functionality and design. CITYRINGEN Throughout the last 13 years, the Metro has developed and been extended to include more routes as new stations have been built. Since 2008, the next phase of the Metro has been taking shape. This new underground Metro extension (called Cityringen in Danish) will encompass 17 new stations to cover areas in the north and south of the city, a 15 km underground railway under downtown Copenhagen, the “bridge quarters” and Frederiksberg.

Bombardier Transportation, a global leader in rail technology, offers the broadest portfolio in the rail industry that covers the full spectrum of rail solutions from the manufacture of passenger rail vehicles, to the provision of complete rail transportation systems &amp; system integration, signalling, propulsion &amp; control technology, asset management and through life support with local engineering and manufacturing. Bombardier Transportation, a division of Bombardier Inc, has an installed base of over 100,000 vehicles worldwide and with over 60 systems in operation around the globe; Bombardier is highly proven to deliver turnkey transportation systems.

Looking far ahead while delivering today, Bombardier is evolving mobility worldwide by answering the call for more efficient, sustainable and enjoyable transportation everywhere. Our vehicles, services and, most of all, our employees are what make us a global leader in transportation.

The circle line is due for completion in 2019. By then it is estimated that a round trip is expected to take approximately 23 minutes. The new stations will be designed using the same principles as the existing ones, fitting in with Copenhagen’s architecture. As the website explains: “It is imperative that the diversity of the urban spaces into which Cityringen’s stations will be integrated is respected and taken into account. “Local variations will affect the design of elements, such as stairways and skylights. In addition to providing the subterranean cityscape of the Metro with daylight, at some locations, skylights will be designed to function as integrated and attractive features of the cityscape above ground.”

Copenhagen is a city that delicately balances preserving the beauty and tradition of older buildings and architecture while introducing modern additions that inevitably mean construction works have to take place. The Cityringen expansion means construction sites have had to be erected, but instead of it looking unsightly, the Metro uses Cool Construction. Cool Construction turns construction site hoardings into temporary urban labs for the benefit of neighbours and passers-by. Itâ&amp;#x20AC;&amp;#x2122;s financed by the sale of advertising space on dedicated parts of the hoarding and was launched in 2011. Now, more than 100 projects are completed each year all around inner Copenhagen.

METRO SERVICE The Metro is maintained by Metro Service A/S, a privately owned company run by a senior management team led by CEO Claudio Cassarino. Metro Service has 285 employees working for the same purpose; ensuring that the Copenhagen Metro provides the best possible service for over 170,000 daily passengers. The team includes everyone from Stewards to assist customers in stations and on trains, Train Dispatchers keeping the trains and stations under surveillance while the Passenger Information Officers answering passengersâ&amp;#x20AC;&amp;#x2122; calls from the call points and in Customer Service. To ensure efficient running of the service, a range of different technicians are making sure that the tracks and trains are always up to speed, damages fixed and parts changed. The tracks are inspected frequently, and once a year they are polished to make the journey smoother and to minimise noise from the trains. With the Cityringen well into construction, Copenhagenâ&amp;#x20AC;&amp;#x2122;s Metro looks set to power into the next phase of transporting more passengers around Denmarkâ&amp;#x20AC;&amp;#x2122;s most popular city.