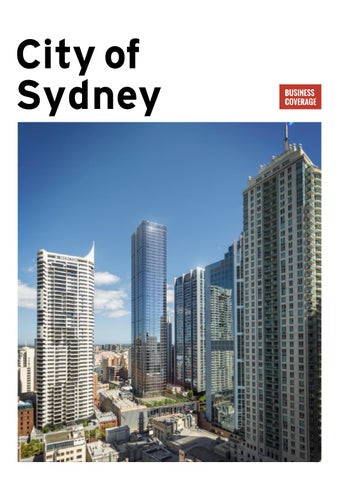 ydney is world renown for its vibrancy, multiculturalism and natural beauty. The state capital of New South Wales is the most populous city in Australia and Oceania. With its rich history, internationally-recognised tourist attractions and exciting calendar of events, it is vital that the city is run effectively. The City of Sydney is the local government authority responsible for the city centre and more than 30 suburbs. This area covers just over 26 square kilometres extending from Sydney Harbour at Rushcutters Bay, to Glebe and Annandale in the west, from Sydney Park and Rosebery in the south to Centennial Park and Paddington in the east. It provides services for more than 180,000 residents and 20,000 businesses, as well as the daily influx of workers and visitors into the City. On any given day, the local population swells to more than 1 million with people commuting, doing business, shopping, playing, studying, or experiencing the sights of Sydney. These services extend from running a network of libraries, street cleansing, maintaining roads, assessing development applications, collecting waste and recycling, maintaining parks, playgrounds and gardens, sports venues and community centres.

The City of Sydney’s remit is simple: to advance and enhance its reputation as Australia’s premier city on a global level. It does this through: • encouraging, fostering and providing small business support

• making sure the City’s many beautiful buildings, landmarks and heritage are preserved

• promoting Sydney as a tourist destination and providing services for its visitors.

An important part of the City of Sydney’s work is focusing on what residents and businesses in the area believe would benefit the area. Back in 2007, the City of Sydney set out to ask both groups what they wanted to see in the next 20 years and beyond to achieve a collective vision for Sydney’s future development. “People told us they wanted a city that cares about the environment, has a strong economy, supports the arts and that connects its people to each other and the rest of the world,” it says. “As a result, Sustainable Sydney 2030 is now the cornerstone of everything we do.”

In Sydney, QMC Group reconstructed 4000m2 of Pitt Street Mall between King &amp; Market St, arguably the busiest Mall in the Southern Hemisphere amongst major business and retail precincts. The works also involved some major high voltage infrastructure on Market and Pitt St and structural works on Westﬁelds Sydney City Development. Since 2013 QMC has headed The City of Sydney Granite Paving Panel and has redeveloped streetscape throughout the city in and amongst busy retail, business and residential precincts.

In Central Queensland QMC has worked since 2004 on Ports and LNG Projects. Our team there has worked in Brisbane and throughout regional parts of Queensland.

July 2015 will see QMC complete the Broadway Cycle Link from the University of Sydney to Ultimo TAFE, a project for The City of Sydney unrelated to the Granite Paving Program.

QMCs Managing Director attributes the company’s success to ﬁnancial and managerial stability. The business capability and capacity comes down to the willingness of key managers to engage with its clients. QMC approaches each project as a stakeholder and want the same outcomes as our clients and the communities we are constructing for.

QMC has constructed new roads and bridges in NSW and Queensland. They have strengthened bridges to extend their design life and also rehabilitated bridges and creeks following extensive ﬂood damage.

QMC Groupâ&amp;#x20AC;&amp;#x2122;s projects are always multi-disciplined, complex and challenging. Often the works are in very busy places with fast track programs and continuous exposure to regulatory authorities, the media, large corporate organisations and political influences. These type of projects require a 24/7 commitment to deliver, and the delivery shall never compromise safety, the environment or quality. We measure our customer satisfaction by repeat business. For the last 10years our repeat business is 95%. QMC Groups greatest satisfaction is working again and again with our clients and their communities. QMCs Managing Director attributes the Companyâ&amp;#x20AC;&amp;#x2122;s success to financial and managerial stability. The business capability and capacity comes down to the willingness of key managers to engage with its clients. QMC approach each project as a stakeholder and want the same outcomes as our clients and the communities we are constructing for.

In Central Qld QMC has worked since 2004 on Ports and LNG Projects. Our Central Qld team has worked in Brisbane and throughout regional parts of Queensland.

QMC has constructed new roads and bridges in NSW and Qld. They have strengthened bridges to extend their design life and also rehabilitated bridges and creeks following extensive ﬂood damage.

Sustainable Sydney 2030 will make Sydney a green, global and connected city. “The City is fast becoming a leading environmental performer and our sustainability plan guides what we do – sustainable development is not just about the physical environment but it is also about fostering Sydney’s economy, society and culture into our plans.”

To ensure Sydney is always improving, the government authority is consistently undertaking improvement projects. Currently there are six major redevelopment sites across the local area, all in different stages of construction. One of the city’s biggest urban development projects is the

Plans for the area include a highrise hotel, the location of which is being reviewed by Lend Lease – the developer for Barangaroo South precinct. Another area is Central Park, which occupies nearly 6 hectares on Broadway which is being transformed into a residential area, with some offices, shops and cafés.

As part of Sustainable Sydney 2030, an area named Green Square is set to become a true exemplar of green living with developments linked to recycled water, people linked to shops, parks, gardens and entertainment with bike and walking routes, and public transport.

Ashmore precinct. Located in Erskineville and on the border of Alexandria, the 17-hectare site will be a new residential neighbourhood with local shops, cafés and a small supermarket.

Work will continue over the next decade to eventually house around 6,000 residents. Along the way, new streets will be created (some with separated bicycle lanes), a large central park and systems to manage stormwater. Another area undergoing urban redevelopment is Barangaroo, a 22 hectare site formerly known as Darling Harbour east. Here, residential, retail and commercial buildings will eventually cater for up to 23,000 workers and 2,000 residents.

At the heart of the Green Square development is the new town centre, a major new residential, retail and cultural hub, with an investment of $440 million over the next 10 years.

For the Harold Park regeneration, the City adopted new planning controls following extensive consultation with the local community to balance the interests of residents, businesses and the land owners, and the need to meet targets for new inner-city housing. This $1.1 billion project includes 1,250 new residences that will be home to around 2,500 people. These tomes will be close to light rail, new parks and nearly 2 kilometres of walking and cycling paths will connect Harold Park to the surrounding area. Using a former tram depot on the site, new homes will be able to use less energy and water, again contributing to the 2030 vision.

Along with multimillion dollar urban developments, the government works hard to introduce new measures to improve transport and connectivity. One of the cityâ&amp;#x20AC;&amp;#x2122;s busiest streets, George Street, will undergo one of the biggest transformations ever seen in Sydney when the light rail line is introduced. The revamped street will become an easy way to travel between key attractions from the the harbour through the city centre to Chinatown. Along with this, the new Central Business Districy and South East

Light Rail will travel from Circular Quay along George Street to Central Station and on to Moore Park, then to Kingsford via Anzac Parade and Randwick via Alison Road and High Street.

Functionality is important - but so is making Sydney an even more beautiful city. To this end, a $9.3 million plan is being undertaken to display public art in collaboration with renowned international curator, Barbara Flynn. The works are expected to be installed from 2017, in line with the implementation of the light rail line on George Street.