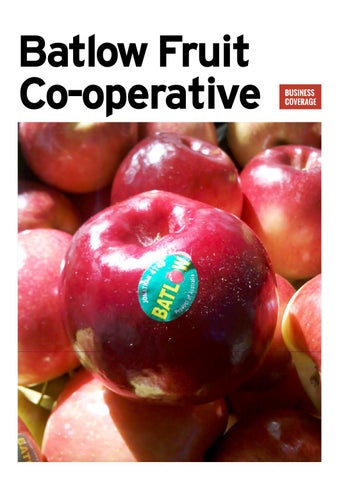 Australiaâ&amp;#x20AC;&amp;#x2122;s finest apples produce by a community of growers

he distinctive crisp taste of a Batlow Apple is one that has been enjoyed by the majority of Australians for more than 85 years. Behind the unique flavour is a Fruit Cooperative that has grown from a small group of growers formed after the first World War to one of the countryâ&amp;#x20AC;&amp;#x2122;s largest storage and packing operations, shifting an average of one million apple cartons a year. The region of Batlow is located at the base

of the Snowy Mountains, 450km south west of Sydney in New South Wales. It is here where Batlow Fruit Co-operative is one of only a few packing sheds in Australia to attain the world recognised quality standards of ISO 9002 and HACCP 9000. The Batlow brand is far more than just premium quality apples. It represents a growers community, where dedicated and hard working people serve to produce the best apples in Australia. Batlow enjoyed a bumper harvest in 2015, despite hail damaging 4,000 bins of fruit across the region, with the Co-Op’s general manager John Power stating it was the biggest crop in almost six years. THE BATLOW APPLE There are many factors that combine to create the famous Batlow Apple. A combination of location, climate, soil, the best varieties, careful attention by growers in looking after their orchards, and a world class grading and packaging process is required. “A major part of the Batlow Secret to growing great apples is a very precise climate,” the company says. “Based in the foothills of the Snowy Mountains of New South Wales, the town of Batlow has the perfect climate-not too hot and not too cold. “Red apple varieties need the cooler weather at night during ripening as it triggers an enzyme to increase the colour of the fruit. The Batlow climate

is just right. Combined with its rich soil, Batlow provides growing conditions which cannot be found or replicated anywhere else in Australia.â&amp;#x20AC;? The process of producing an apple is long, with the treatment of the apple tree crucial to achieve maximum taste. A tree will take approximately two years to bear fruit, with the most important time of the year coming during spring when pollination occurs. As Batlow explains, these grow numerous blossoms in clusters of five. The largest blossom in the cluster is known as the king blossom, and the opening of this blossom is a sign for the bees to commence pollination. Pruning is important even in the summer months, as the shape of the tree is vital in determining the size, quality and condition of a crop. Apples start to grow quickly towards the latter half of summer and in the autumn, Batlow as

Castle Chemicals is a second generation, family owned Australian business with over 40 years’ experience in the fruit and vegetable industry. We are an industry leader, enabling our customers to take full advantage of our research and development in postharvest issues. Castle Post Harvest offers efficient, value-adding, sustainable products and services including waxes, sanitation, fungicides and cleaners. We would like to take the opportunity to thank Batlow Co-op in choosing Castle as their preferred postharvest supplier.

‘Castle Chemicals has a large range of postharvest products including different types of fruit coatings, e.g. Shellac, Carnauba and mixtures of both for every possible application and requirement.’ – Graeme McNeil, Manager G.V. Crop Protection

apples are ready to pick. The growers and their pickers harvest the apples then send them to the Batlow Fruit Co-operative to start the next stage of their life cycle; sorting and packing. ADVANCED SYSTEMS Batlow does everything it can to help achieve optimum conditions, and has invested heavily in technology to help it do so.

Every day, Batlow’s horticulturalists are trying to identify new and improved ways of not only growing their apples, but also controlling pests and minimising any damage to crops. One of these technological advances is used to control codling moths as opposed to chemicals. This technology, known as mating disruption or IPM (Integrated Pest Management) involves the use of small dispensers placed in the apple trees. These emit synthetically produced female pheromones to confuse the male moth and disrupts the mating cycle. “This breakthrough has completely changed the ecology of the orchards, allowing naturally

Having started from humble beginnings in Auckland in 1951, we have grown over the years in our number of branches, staﬀ employed and product lines we oﬀer. With a branch network of 67 branches nationwide we continue to remain focused on our founding values of integrity and exceptional service.

Our in-house specialist Lighting, Data, Technology and Industrial teams are here to assist you with expert advice for your project requirements, from residential to large commercial and specialist projects. We strive to provide you with the very best solution, using quality products combined with best practice techniques - oﬀering you peace of mind.

occurring beneficial insects to survive and control other pests,â&amp;#x20AC;? says Batlow, who use the process throughout its orchards. GRADING AND PACKING Once the apples are picked, Batlow Apples must be packed carefully to ensure they stay in perfect condition. They are put into large bins on the orchards and transported to the Batlow Fruit Co-operative just minutes away. Here,

they are transported to special rooms where they are kept at just the right temperature to keep them fresh, crisp and juicy before being graded. Water canals are used to transport apples in the grading process to minimise bruising and damage to the apples.The Batlow seal of approval is not awarded until each and every apple is checked by sight, and then photographed both inside and out by a revolutionary grading machine where each one is photographed 42 times, just one of the innovations Batlow has introduced to enhance its produce. Any fruit that does not meet the Batlow standard is separated, while the rest of the apples continue on conveyor belts to the next stage. At this point, the apples are washed, dried and waxed using a natural polish before being double checked and graded to ensure only the best fruit is packed. â&amp;#x20AC;&amp;#x153;The apples are sent along a speedy five lane grader fitted with a camera box that photographs 40 pieces of fruit per second. This camera is programmed with the strict grading standards of the Batlow Fruit Co-operative to assess the colour of each piece of fruit. Each apple is then weighed and separated to be packed with apples of similar size, colour and weight,â&amp;#x20AC;? says the company. Apples are then stickered, placed onto trays and into cartons which are loaded onto pallets to be stored in cool rooms to await daily transportation to markets throughout Australia.

NEW VENTURES In 2010, Batlow entered into a joint venture with two brothers, Rich and Sam Coombes, who had the idea of creating a truly Australian cider. This venture now comprises around 30 orchard-owning families around the Batlow township. There are three and a half bottles od Batlow Apples in every bottle of Batlow Cider - making Australiaâ&amp;#x20AC;&amp;#x2122;s Favourite Apples into Australiaâ&amp;#x20AC;&amp;#x2122;s Favourite Cider.