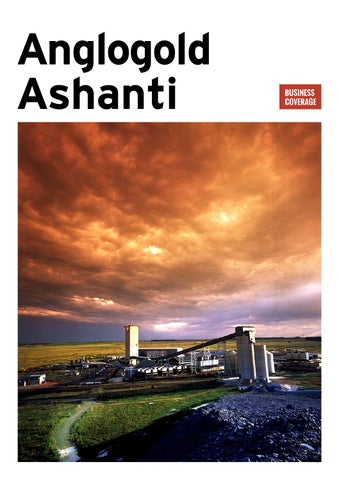 n 2014, AngloGold Ashanti celebrated it’s 10th birthday following the merger of AngloGold and Ashanti Goldfields Corporation in 2004. Now a decade on from that powerful union, what does the future hold for the world’s third largest gold mining company? There is no doubt that AngloGold Ashanti, headquartered in Johannesburg, South Africa, is a glob-al mining powerhouse. Aside from the fact that it presently runs 20 separate active operations in 10 countries spanning four continents, it is also continuing to identify viable sites in both new and es-tablished gold producing regions across the world. It is one of the world’s largest gold extractors producing millions of ounces each year and as a result, a significant global employer to people from varying ethnicities and cultures.

Employing over 60,000 people worldwide cannot be easy, mixing the obvious need to please shareholders, with a delicate social responsibility to foster those communities directly affected by the companyâ&amp;#x20AC;&amp;#x2122;s operations. Fortunately AngloGold Ashanti is a company with a clear and decisive plan for the way

in which it operates, ensuring that it considers people as much as profit.

Whilst some companies may appear to be more interested in discussing merely the headline finan-cials, AngloGold is a company taking as much time and effort to openly discuss its sustainability values and ethos as the financial plans it has for the future.

during 2014). Not stopping here, it has also endeavoured to ensure all staff are treated with dignity, respect and appreciated for the diversity they bring to the company.

This ethos is married with a belief that the duties of the company also extend beyond the employ-ees and into the wider communities, with an appreciation that AngloGold is accountable for its ac-tions. It has gone as far as to state that it hopes communities and societies in which it operates are better off as a result of AngloGoldâ&amp;#x20AC;&amp;#x2122;s presence and not the other way around. For example, An-gloGold has made no secret of the fact that it requires water for mining operations to function, but that it is committed to ensuring it utilises as little as possible to avoid negatively effecting the sur-rounding communities or ecosystem.

It has forged an impressive policy for sustainability with a defined core strategy which revolves around many facets and not just profita-bility alone. A need to ensure that the safety of all employees is paramount, has been instilled across the company (resulting in the halts to production within South Africa following an earth-quake

All this said, AngloGold clearly understands its primary purpose - the extraction of a precious metal from the earth, the need for revenue growth and for meeting its obligations to shareholders. In 2014 AngloGold produced over 4.4Moz of gold (approximately 11,000 of the gold bars you see in the movies) generating around $5.2bn in gold income, ranking it as the third largest gold miner in the world. It continued to invest in capital growth projects (such as Kibali underground and the MLE2 expansion at Cripple Creek &amp; Victoria) throughout 2014. The company also focused heavily on reducing costs and overheads throughout the year and to great success following management

initiatives. These resulted in a 5% reduction in total cash costs and an impressive 13% drop in all-in sustaining costs. It also managed to record an increase in gold production for the second consecutive year with 8% being recorded year-on-year. This has meant that despite a significant drop in the price of gold (around 10% versus 2013), the company remains as strong as it was at the end of 2013. AngloGold has recently taken the decision to shift its focus from overseas to home, with the announcement that it was willing to sell its operation in Colorado, US (Cripple Creek &amp; Victoria) to the right buyer but only at the right price.

AngloGold has previously stated that it wants to reduce its debt and the sale of all, or a stake in, the US mine would appear to be part of an â&amp;#x20AC;&amp;#x153;objective to sim-plify and improve the overall quality of its portfolioâ&amp;#x20AC;?. However, any suggestions that this could weaken the company should perhaps be countered with a reminder of the companyâ&amp;#x20AC;&amp;#x2122;s asset portfo-lio strength. With attributable gold ore reserves of over 57Moz and further mineral resources upwards of 230Moz (plus explorations underway for new potential sites), suggesting it is highly likely that AngloGold will be operating as a major global gold producer for many decades to come.

Cyest Technology’s vision is to enhance decisionmaking and planning by enabling management to test their options The Cyest Technology team has a reputation for its thought leadership and innovative solutions in the mining industry. Next generation of ‘Smart’ Mine Technical Systems Software that is changing Mine Planning processes globally.

Rapid mine planning including economics allowing for alternatives to be considered using template based design and scheduling technology.

Portfolio Modelling and Optimisation for capital project selection and scheduling by leveraging the power of Cloud computing.

Performance Diagnostics by relating the business variables and logic in a model.