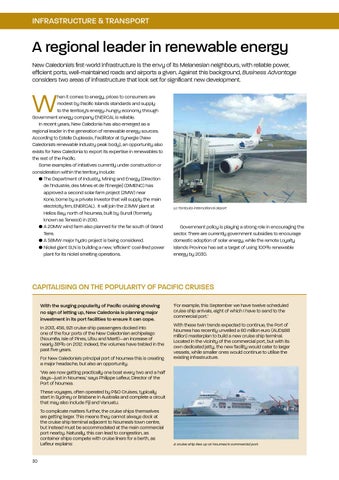 A regional leader in renewable energy New Caledonia’s first-world infrastructure is the envy of its Melanesian neighbours, with reliable power, efficient ports, well-maintained roads and airports a given. Against this background, Business Advantage considers two areas of infrastructure that look set for significant new development.

hen it comes to energy, prices to consumers are modest by Pacific Islands standards and supply to the territory’s energy-hungry economy through Government energy company ENERCAL is reliable. In recent years, New Caledonia has also emerged as a regional leader in the generation of renewable energy sources. According to Estelle Duplessix, Facilitator at Synergie (New Caledonia’s renewable industry peak body), an opportunity also exists for New Caledonia to export its expertise in renewables to the rest of the Pacific. Some examples of initiatives currently under construction or consideration within the territory include: • T he Department of Industry, Mining and Energy [Direction de l’Industrie, des Mines et de l’Energie] (DIMENC) has approved a second solar farm project (2MW) near Kone, borne by a private investor that will supply the main electricity firm, ENERCAL). It will join the 2.1MW plant at Helios Bay, north of Noumea, built by Sunzil (formerly known as Tenesol) in 2010. • A 20MW wind farm also planned for the far south of Grand Terre. • A 58MW major hydro project is being considered. •N ickel giant SLN is building a new, ‘efficient’ coal-fired power plant for its nickel smelting operations.

Government policy is playing a strong role in encouraging the sector. There are currently government subsidies to encourage domestic adoption of solar energy, while the remote Loyalty Islands Province has set a target of using 100% renewable energy by 2030.

Capitalising on the popularity of Pacific cruises With the surging popularity of Pacific cruising showing no sign of letting up, New Caledonia is planning major investment in its port facilities to ensure it can cope. In 2013, 456, 921 cruise ship passengers docked into one of the four ports of the New Caledonian archipelago (Nouméa, Isle of Pines, Lifou and Maré)—an increase of nearly 38% on 2012. Indeed, the volumes have trebled in the past five years. For New Caledonia’s principal port of Noumea this is creating a major headache, but also an opportunity. ‘We are now getting practically one boat every two and a half days—just in Noumea,’ says Philippe Lafleur, Director of the Port of Noumea. These voyages, often operated by P&amp;O Cruises, typically start in Sydney or Brisbane in Australia and complete a circuit that may also include Fiji and Vanuatu. To complicate matters further, the cruise ships themselves are getting larger. This means they cannot always dock at the cruise ship terminal adjacent to Noumea’s town centre, but instead must be accommodated at the main commercial port nearby. Naturally, this can lead to congestion, as container ships compete with cruise liners for a berth, as Lafleur explains: 30

‘For example, this September we have twelve scheduled cruise ship arrivals, eight of which I have to send to the commercial port.’ With these twin trends expected to continue, the Port of Noumea has recently unveiled a 60 million euro (AUD$88 million) masterplan to build a new cruise ship terminal. Located in the vicinity of the commercial port, but with its own dedicated jetty, the new facility would cater to larger vessels, while smaller ones would continue to utilise the existing infrastructure.

A cruise ship ties up at Noumea’s commercial port.