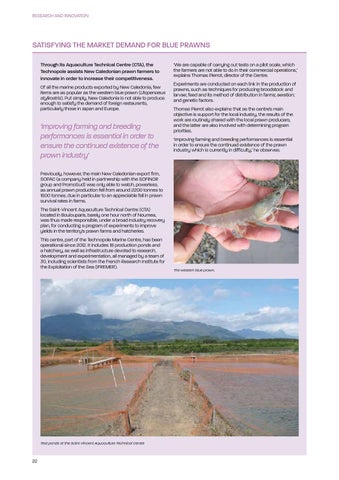 Satisfying the market demand for blue prawns Through its Aquaculture Technical Centre (CTA), the Technopole assists New Caledonian prawn farmers to innovate in order to increase their competitiveness. Of all the marine products exported by New Caledonia, few items are as popular as the western blue prawn (Litopenaeus stylirostris). Put simply, New Caledonia is not able to produce enough to satisfy the demand of foreign restaurants, particularly those in Japan and Europe.

&#39;Improving farming and breeding performances is essential in order to ensure the continued existence of the prawn industry’ Previously, however, the main New Caledonian export firm, SOPAC (a company held in partnership with the SOFINOR group and PromoSud) was only able to watch, powerless, as annual prawn production fell from around 2200 tonnes to 1600 tonnes, due in particular to an appreciable fall in prawn survival rates in farms. The Saint-Vincent Aquaculture Technical Centre (CTA) located in Boulouparis, barely one hour north of Noumea, was thus made responsible, under a broad industry recovery plan, for conducting a program of experiments to improve yields in the territory’s prawn farms and hatcheries. This centre, part of the Technopole Marine Centre, has been operational since 2012. It includes 18 production ponds and a hatchery, as well as infrastructure devoted to research, development and experimentation, all managed by a team of 30, including scientists from the French Research Institute for the Exploitation of the Sea (IFREMER).

‘We are capable of carrying out tests on a pilot scale, which the farmers are not able to do in their commercial operations,’ explains Thomas Pierrot, director of the Centre. Experiments are conducted on each link in the production of prawns, such as techniques for producing broodstock and larvae; feed and its method of distribution in farms; aeration; and genetic factors. Thomas Pierrot also explains that as the centre’s main objective is support for the local industry, the results of the work are routinely shared with the local prawn producers, and the latter are also involved with determining program priorities. ‘Improving farming and breeding performances is essential in order to ensure the continued existence of the prawn industry which is currently in difficulty,’ he observes.