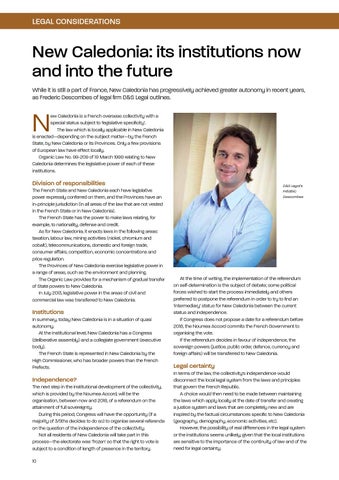 New Caledonia: its institutions now and into the future While it is still a part of France, New Caledonia has progressively achieved greater autonomy in recent years, as Frederic Descombes of legal firm D&amp;S Legal outlines.

ew Caledonia is a French overseas collectivity with a special status subject to ‘legislative specificity’. The law which is locally applicable in New Caledonia is enacted—depending on the subject matter—by the French State, by New Caledonia or its Provinces. Only a few provisions of European law have effect locally. Organic Law No. 99-209 of 19 March 1999 relating to New Caledonia determines the legislative power of each of these institutions.

Institutions In summary, today New Caledonia is in a situation of quasi autonomy. At the institutional level, New Caledonia has a Congress (deliberative assembly) and a collegiate government (executive body). The French State is represented in New Caledonia by the High Commissioner, who has broader powers than the French Prefects.

Independence? The next step in the institutional development of the collectivity, which is provided by the Noumea Accord, will be the organisation, between now and 2018, of a referendum on the attainment of full sovereignty. During this period, Congress will have the opportunity (if a majority of 3/5ths decides to do so) to organise several referenda on the question of the independence of the collectivity. Not all residents of New Caledonia will take part in this process—the electorate was &#39;frozen&#39; so that the right to vote is subject to a condition of length of presence in the territory. 10

At the time of writing, the implementation of the referendum on self-determination is the subject of debate; some political forces wished to start the process immediately and others preferred to postpone the referendum in order to try to find an ‘intermediary’ status for New Caledonia between the current status and independence. If Congress does not propose a date for a referendum before 2018, the Noumea Accord commits the French Government to organising the vote. If the referendum decides in favour of independence, the sovereign powers (justice, public order, defence, currency and foreign affairs) will be transferred to New Caledonia.

Legal certainty In terms of the law, the collectivity’s independence would disconnect the local legal system from the laws and principles that govern the French Republic. A choice would then need to be made between maintaining the laws which apply locally at the date of transfer and creating a justice system and laws that are completely new and are inspired by the factual circumstances specific to New Caledonia (geography, demography, economic activities, etc). However, the possibility of real differences in the legal system or the institutions seems unlikely, given that the local institutions are sensitive to the importance of the continuity of law and of the need for legal certainty.