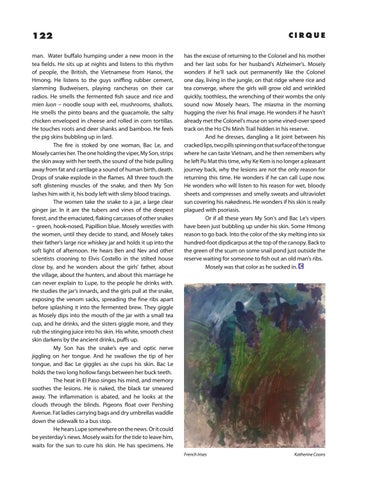 122 man. Water buffalo humping under a new moon in the tea fields. He sits up at nights and listens to this rhythm of people, the British, the Vietnamese from Hanoi, the Hmong. He listens to the guys sniffing rubber cement, slamming Budweisers, playing rancheras on their car radios. He smells the fermented fish sauce and rice and mien luon – noodle soup with eel, mushrooms, shallots. He smells the pinto beans and the guacamole, the salty chicken enveloped in cheese and rolled in corn tortillas. He touches roots and deer shanks and bamboo. He feels the pig skins bubbling up in lard. The fire is stoked by one woman, Bac Le, and Mosely carries her. The one holding the viper, My Son, strips the skin away with her teeth, the sound of the hide pulling away from fat and cartilage a sound of human birth, death. Drops of snake explode in the flames. All three touch the soft glistening muscles of the snake, and then My Son lashes him with it, his body left with slimy blood tracings. The women take the snake to a jar, a large clear ginger jar. In it are the tubers and vines of the deepest forest, and the emaciated, flaking carcasses of other snakes – green, hook-nosed, Papillion blue. Mosely wrestles with the women, until they decide to stand, and Mosely takes their father’s large rice whiskey jar and holds it up into the soft light of afternoon. He hears Ben and Nev and other scientists crooning to Elvis Costello in the stilted house close by, and he wonders about the girls’ father, about the village, about the hunters, and about this marriage he can never explain to Lupe, to the people he drinks with. He studies the jar’s innards, and the girls pull at the snake, exposing the venom sacks, spreading the fine ribs apart before splashing it into the fermented brew. They giggle as Mosely dips into the mouth of the jar with a small tea cup, and he drinks, and the sisters giggle more, and they rub the stinging juice into his skin. His white, smooth chest skin darkens by the ancient drinks, puffs up. My Son has the snake’s eye and optic nerve jiggling on her tongue. And he swallows the tip of her tongue, and Bac Le giggles as she cups his skin. Bac Le holds the two long hollow fangs between her buck teeth. The heat in El Paso singes his mind, and memory soothes the lesions. He is naked, the black tar smeared away. The inflammation is abated, and he looks at the clouds through the blinds. Pigeons float over Pershing Avenue. Fat ladies carrying bags and dry umbrellas waddle down the sidewalk to a bus stop. He hears Lupe somewhere on the news. Or it could be yesterday’s news. Mosely waits for the tide to leave him, waits for the sun to cure his skin. He has specimens. He

CIRQUE has the excuse of returning to the Colonel and his mother and her last sobs for her husband’s Alzheimer’s. Mosely wonders if he’ll sack out permanently like the Colonel one day, living in the jungle, on that ridge where rice and tea converge, where the girls will grow old and wrinkled quickly, toothless, the wrenching of their wombs the only sound now Mosely hears. The miasma in the morning hugging the river his final image. He wonders if he hasn’t already met the Colonel’s muse on some vined-over speed track on the Ho Chi Minh Trail hidden in his reserve. And he dresses, dangling a lit joint between his cracked lips, two pills spinning on that surface of the tongue where he can taste Vietnam, and he then remembers why he left Pu Mat this time, why Ke Kem is no longer a pleasant journey back, why the lesions are not the only reason for returning this time. He wonders if he can call Lupe now. He wonders who will listen to his reason for wet, bloody sheets and compresses and smelly sweats and ultraviolet sun covering his nakedness. He wonders if his skin is really plagued with psoriasis. Or if all these years My Son’s and Bac Le’s vipers have been just bubbling up under his skin. Some Hmong reason to go back. Into the color of the sky melting into six hundred-foot dipdicarpus at the top of the canopy. Back to the green of the scum on some snail pond just outside the reserve waiting for someone to fish out an old man’s ribs. Mosely was that color as he sucked in. 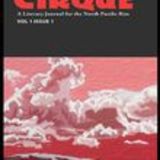