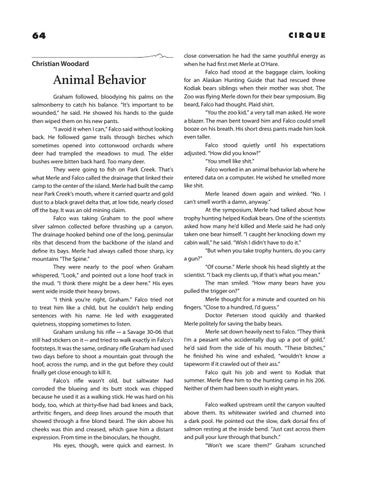 Animal Behavior Graham followed, bloodying his palms on the salmonberry to catch his balance. “It’s important to be wounded,” he said. He showed his hands to the guide then wiped them on his new pants. “I avoid it when I can,” Falco said without looking back. He followed game trails through birches which sometimes opened into cottonwood orchards where deer had trampled the meadows to mud. The elder bushes were bitten back hard. Too many deer. They were going to fish on Park Creek. That’s what Merle and Falco called the drainage that linked their camp to the center of the island. Merle had built the camp near Park Creek’s mouth, where it carried quartz and gold dust to a black gravel delta that, at low tide, nearly closed off the bay. It was an old mining claim. Falco was taking Graham to the pool where silver salmon collected before thrashing up a canyon. The drainage hooked behind one of the long, peninsular ribs that descend from the backbone of the island and define its bays. Merle had always called those sharp, icy mountains “The Spine.” They were nearly to the pool when Graham whispered, “Look,” and pointed out a lone hoof track in the mud. “I think there might be a deer here.” His eyes went wide inside their heavy brows. “I think you’re right, Graham.” Falco tried not to treat him like a child, but he couldn’t help ending sentences with his name. He led with exaggerated quietness, stopping sometimes to listen. Graham unslung his rifle -- a Savage 30-06 that still had stickers on it -- and tried to walk exactly in Falco’s footsteps. It was the same, ordinary rifle Graham had used two days before to shoot a mountain goat through the hoof, across the rump, and in the gut before they could finally get close enough to kill it. Falco’s rifle wasn’t old, but saltwater had corroded the blueing and its butt stock was chipped because he used it as a walking stick. He was hard on his body, too, which at thirty-five had bad knees and back, arthritic fingers, and deep lines around the mouth that showed through a fine blond beard. The skin above his cheeks was thin and creased, which gave him a distant expression. From time in the binoculars, he thought. His eyes, though, were quick and earnest. In

close conversation he had the same youthful energy as when he had first met Merle at O’Hare. Falco had stood at the baggage claim, looking for an Alaskan Hunting Guide that had rescued three Kodiak bears siblings when their mother was shot. The Zoo was flying Merle down for their bear symposium. Big beard, Falco had thought. Plaid shirt. “You the zoo kid,” a very tall man asked. He wore a blazer. The man bent toward him and Falco could smell booze on his breath. His short dress pants made him look even taller. Falco stood quietly until his expectations adjusted. “How did you know?” “You smell like shit.” Falco worked in an animal behavior lab where he entered data on a computer. He wished he smelled more like shit. Merle leaned down again and winked. “No. I can’t smell worth a damn, anyway.” At the symposium, Merle had talked about how trophy hunting helped Kodiak bears. One of the scientists asked how many he’d killed and Merle said he had only taken one bear himself. “I caught her knocking down my cabin wall,” he said. “Wish I didn’t have to do it.” “But when you take trophy hunters, do you carry a gun?” “Of course.” Merle shook his head slightly at the scientist. “I back my clients up, if that’s what you mean.” The man smiled. “How many bears have you pulled the trigger on?” Merle thought for a minute and counted on his fingers. “Close to a hundred, I’d guess.” Doctor Petersen stood quickly and thanked Merle politely for saving the baby bears. Merle sat down heavily next to Falco. “They think I’m a peasant who accidentally dug up a pot of gold,” he’d said from the side of his mouth. “These bitches,” he finished his wine and exhaled, “wouldn’t know a tapeworm if it crawled out of their ass.” Falco quit his job and went to Kodiak that summer. Merle flew him to the hunting camp in his 206. Neither of them had been south in eight years. Falco walked upstream until the canyon vaulted above them. Its whitewater swirled and churned into a dark pool. He pointed out the slow, dark dorsal fins of salmon resting at the inside bend. “Just cast across them and pull your lure through that bunch.” “Won’t we scare them?” Graham scrunched