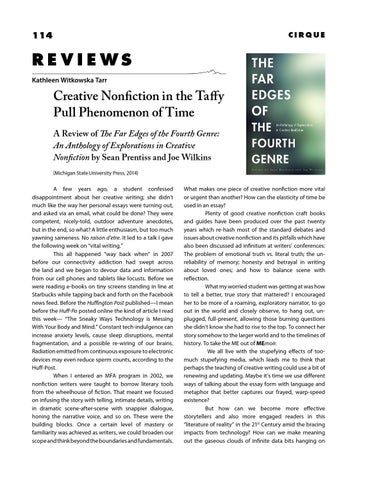 A few years ago, a student confessed disappointment about her creative writing; she didn’t much like the way her personal essays were turning out, and asked via an email, what could be done? They were competent, nicely-told, outdoor adventure anecdotes, but in the end, so what? A little enthusiasm, but too much yawning sameness. No raison d’etre. It led to a talk I gave the following week on “vital writing.” This all happened “way back when” in 2007 before our connectivity addiction had swept across the land and we began to devour data and information from our cell phones and tablets like locusts. Before we were reading e-books on tiny screens standing in line at Starbucks while tapping back and forth on the Facebook news feed. Before the Huffington Post published—I mean before the Huff-Po posted online the kind of article I read this week— “The Sneaky Ways Technology is Messing With Your Body and Mind.” Constant tech-indulgence can increase anxiety levels, cause sleep disruptions, mental fragmentation, and a possible re-wiring of our brains. Radiation emitted from continuous exposure to electronic devices may even reduce sperm counts, according to the Huff-Post. When I entered an MFA program in 2002, we nonfiction writers were taught to borrow literary tools from the wheelhouse of fiction. That meant we focused on infusing the story with telling, intimate details, writing in dramatic scene-after-scene with snappier dialogue, honing the narrative voice, and so on. These were the building blocks. Once a certain level of mastery or familiarity was achieved as writers, we could broaden our scope and think beyond the boundaries and fundamentals.

What makes one piece of creative nonfiction more vital or urgent than another? How can the elasticity of time be used in an essay? Plenty of good creative nonfiction craft books and guides have been produced over the past twenty years which re-hash most of the standard debates and issues about creative nonfiction and its pitfalls which have also been discussed ad infinitum at writers’ conferences: The problem of emotional truth vs. literal truth; the unreliability of memory; honesty and betrayal in writing about loved ones; and how to balance scene with reflection. What my worried student was getting at was how to tell a better, true story that mattered? I encouraged her to be more of a roaming, exploratory narrator, to go out in the world and closely observe, to hang out, unplugged, full-present, allowing those burning questions she didn’t know she had to rise to the top. To connect her story somehow to the larger world and to the timelines of history. To take the ME out of MEmoir. We all live with the stupefying effects of toomuch stupefying media, which leads me to think that perhaps the teaching of creative writing could use a bit of renewing and updating. Maybe it’s time we use different ways of talking about the essay form with language and metaphor that better captures our frayed, warp-speed existence? But how can we become more effective storytellers and also more engaged readers in this “literature of reality” in the 21st Century amid the bracing impacts from technology? How can we make meaning out the gaseous clouds of infinite data bits hanging on