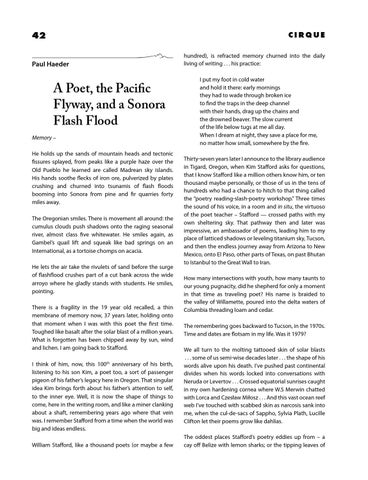 A Poet, the Pacific Flyway, and a Sonora Flash Flood Memory – He holds up the sands of mountain heads and tectonic fissures splayed, from peaks like a purple haze over the Old Pueblo he learned are called Madrean sky islands. His hands soothe flecks of iron ore, pulverized by plates crushing and churned into tsunamis of flash floods booming into Sonora from pine and fir quarries forty miles away. The Oregonian smiles. There is movement all around: the cumulus clouds push shadows onto the raging seasonal river, almost class five whitewater. He smiles again, as Gambel’s quail lift and squeak like bad springs on an International, as a tortoise chomps on acacia. He lets the air take the rivulets of sand before the surge of flashflood crushes part of a cut bank across the wide arroyo where he gladly stands with students. He smiles, pointing. There is a fragility in the 19 year old recalled, a thin membrane of memory now, 37 years later, holding onto that moment when I was with this poet the first time. Toughed like basalt after the solar blast of a million years. What is forgotten has been chipped away by sun, wind and lichen. I am going back to Stafford. I think of him, now, this 100th anniversary of his birth, listening to his son Kim, a poet too, a sort of passenger pigeon of his father’s legacy here in Oregon. That singular idea Kim brings forth about his father’s attention to self, to the inner eye. Well, it is now the shape of things to come, here in the writing room, and like a miner clanking about a shaft, remembering years ago where that vein was. I remember Stafford from a time when the world was big and ideas endless. William Stafford, like a thousand poets (or maybe a few

hundred), is refracted memory churned into the daily living of writing . . . his practice: I put my foot in cold water and hold it there: early mornings they had to wade through broken ice to find the traps in the deep channel with their hands, drag up the chains and the drowned beaver. The slow current of the life below tugs at me all day. When I dream at night, they save a place for me, no matter how small, somewhere by the fire. Thirty-seven years later I announce to the library audience in Tigard, Oregon, when Kim Stafford asks for questions, that I know Stafford like a million others know him, or ten thousand maybe personally, or those of us in the tens of hundreds who had a chance to hitch to that thing called the “poetry reading-slash-poetry workshop.” Three times the sound of his voice, in a room and in situ, the virtuoso of the poet teacher – Stafford — crossed paths with my own sheltering sky. That pathway then and later was impressive, an ambassador of poems, leading him to my place of latticed shadows or leveling titanium sky, Tucson, and then the endless journey away from Arizona to New Mexico, onto El Paso, other parts of Texas, on past Bhutan to Istanbul to the Great Wall to Iran. How many intersections with youth, how many taunts to our young pugnacity, did he shepherd for only a moment in that time as traveling poet? His name is braided to the valley of Willamette, poured into the delta waters of Columbia threading loam and cedar. The remembering goes backward to Tucson, in the 1970s. Time and dates are flotsam in my life. Was it 1979? We all turn to the molting tattooed skin of solar blasts . . . some of us semi-wise decades later . . . the shape of his words alive upon his death. I’ve pushed past continental divides when his words locked into conversations with Neruda or Levertov . . . Crossed equatorial sunrises caught in my own hardening cornea where W.S Merwin chatted with Lorca and Czesław Miłosz . . . And this vast ocean reef web I’ve touched with scabbed skin as narcosis sank into me, when the cul-de-sacs of Sappho, Sylvia Plath, Lucille Clifton let their poems grow like dahlias. The oddest places Stafford’s poetry eddies up from – a cay off Belize with lemon sharks; or the tipping leaves of