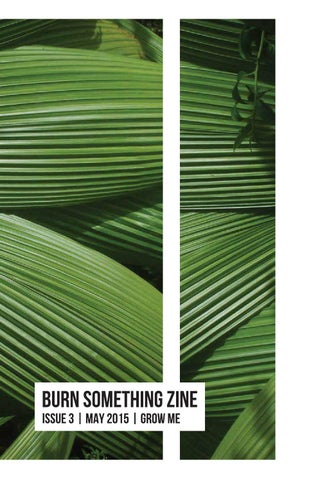 Are you growing? Yes? No? Why? Why not? What has growing or not growing looked like for you? How can we grow together?

Burn Something Zine is a submission-based, queer-inclusive alternative media space focused on amplifying the voices of women of color. The vision for Burn Something includes an artist collective that produces the zine and throws community-based parties and events. If you are interested in becoming a part of the collective, please email burnsomethingzine@gmail.com.

SEND UR SHIT Please send queastions and submissions to burnsomethingzine@gmail.com.

This is the Healing Part, it Looks Like Setting a Broken Bone Bri Lopez Don

RE: are you growing? Jen Wang

He hurls rocks at them They stand before him, armed and ready for battle--daring, provoking He knows any day, any wrong move and it could be him-crushed larynx, back split in two They have done it before with impunity, emboldened by the comrades at their back Emboldened by the comrades at his front, back, and side, he defies They can’t take us all! He draws back his arm and releases-throws his pain throws his anger throws his fear and rage at the cowards masked in riot gear He is also masked. But a mother knows She sees her baby, taking up power when he feels so powerless and she also knows how easily overpowered he would be Fear vice-grips her heart and she runs toward him Her spirit prematurely grieves She sees him in the now, a target She sees him in a very likely future gangly limbs lifeless in the street In a flash she unmasks him She won’t allow him to be another nameless faceless nigger to them She won’t allow him to be another hashtag to rally us No! He is bringing his ass home where she can see him where she can feel him Though he is beside her now, the fear has not loosened its grip She draws back her arm and releases She hurls her fear hurls her pain hurls the weight of what little power she has in the world at his face He does not resist, still her hands do not relent Black boy, so it dampens your defiance I will fucking hurt you! She longs to shield him from baton taser bullet assaulting his flesh The world applauds her pummeling the already compliant child

seeming not to realize that we think the only language black boys understand They, the cowards in riot gear, are armed and ready for battle -- the only way they k and the girls we always forget Black boy, you gonna bow your head or I will fucking hurt you! And by now, he, this black boy being slapped and punched and shoved by she, the between the blows and heard Come here, let Mama hold you close. It would kill me to lose you

is pain know how to meet black boys

Burn Something is a submission-based, queer-inclusive alternative media space focused on amplifying the voices of women of color. 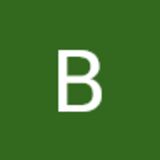 More from Burn Something Collective