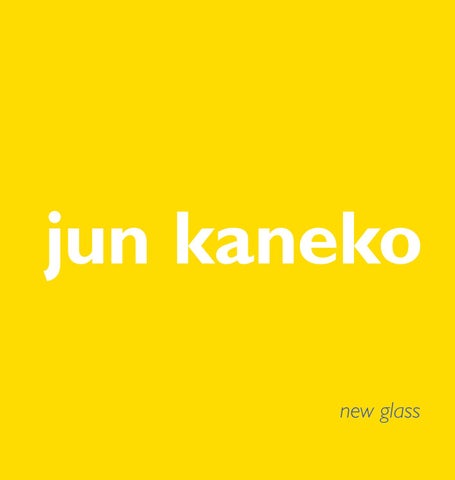 “Most everything I do,” Kaneko says, “is from my gut response, not analytical.” It’s March 19, 2007, just one day before the opening of Jun Kaneko’s New Glass at Bullseye Gallery. Freshly arrived in Portland from Hawaii, the artist is inspecting the exhibition for the first time. It’s a show three years in the making, with five preparatory visits and countless hours of phone and Internet consultations under the bridge, and now, tonight, everything has come together. Almost. Kaneko, in his customary black ensemble, is in Bullseye’s upstairs gallery looking at a piece called Liquid Velocity 2, a trio of six-foot-high slabs of kilnformed glass layered with blue flow bars. The slabs are all face-forward, uniformly distanced from one another, staring back at Kaneko as he stares at them. At great length he decides he wants two of the pieces to be turned around, so that their glossy fronts face the wall and their matte backsides face the viewer. He also wants to group the backward-facing pieces close to one another, with the forward piece off to the side. The

installers accompanying Kaneko glance at one another. Each of the slabs weighs 293 pounds and is the product of some 159 hours in the studio and more than a week in the kiln. Moving pieces of this size will require three installers working in tandem in an exercise that requires equal parts brute strength and exquisite delicacy. One misstep and the whole slab could come crashing down. But Kaneko has made his decision, the opening is imminent, the clock is ticking. The installers get to work. Fast-forward to opening night, and the pieces look like they were born this way: forward/backward, matte/glossy, grouped/distanced, communicating with one another and the viewer in a spatial key signature simultaneously harmonious and dissonant. “Most everything I do,” Kaneko says, “is from my gut response, not analytical.” And he means it, as the incident with Liquid Velocity 2 has shown.

“I am becoming more elemental visually. To deduct complexity is difficult. To take something out, you have to know both sides of it.” Intuitive, thoughtful, poetic, he responds with particular acuity to the vagaries inhabiting the pregnant space between an artwork and its creator. This is Kaneko’s third all-glass show at Bullseye. His first was in 2001, his second in 2002. The seeds of these and the current show were sown in 1998, when the artist first met Bullseye’s directors in Fort Worth, Texas, at the annual conference of the National Council on Education for the Ceramic Arts (NCECA). Always interested in exploring new materials, he populated his debut show as a glass artist with clear and primary-colored slabs and architectonic towers fashioned from interlocking kilnformed sticks, stacked upon

one another like Lincoln Logs. His second show featured stringer panels and triangular compositions that hung from the ceiling. At the time, he said he was in the process of “developing a complex visual language within the simple placement of stringers on flat glass.” Since 2002 he seems to have taken Thoreau’s edict—“Simplify, simplify!”—to heart and in the current show has markedly simplified that “complex visual language.” As he said on the opening night of New Glass, “I am becoming more elemental visually. To deduct complexity is difficult. To take something out, you have to know both sides of it.” Achieving simplicity this time around took 20,000 pounds of raw glass, more than 10,000 hours of fabrication time, 40 cast-glass slabs, and a 42-footInstallation view of Jun Kaneko’s New Glass at Bullseye Gallery

with exacting regularity; Water Dream scatters the marks like buckshot; Tropical Shower introduces color, with long raindrops in yellow, red, violet, and turquoise; and Tropical Shower 2 combines Blue Current’s blue dashes with Tropical Shower’s rainbow hues. Within the formal parameters of four rectangular slabs jotted with vertical marks, Kaneko has developed progressive permutations of regularity and irregularity as the building blocks for a new vocabulary. In the center of the gallery, behind a wooden column, is an imposing, curved wall of 30 panels made from glass thread, lit such that tiny pinpoints twinkle like stars through champagne bubbles. The piece, which is called Mythology, is built upon the irregular spacing of black and white horizontal

threads. “The orchestration of spaces between the black and white stringers,” Kaneko says, “is almost like composing music... Lots of my pieces are about space. I make marks to create the space in between.” One walks around Mythology and wonders where it will stop, whether it is perfectly round, whether it has an interior, and if so, if one will be able to venture inside. Ultimately, one discovers that it is not a perfect circle, but irregularly curved, like the innermost chambers of a nautilus. Inside, the glass’ surface is reflective, the threaded panels reflecting patterns and light from the panels opposite them. For the viewer, the experience is peripatetic and investigational: experiencing the artist’s feints as the illusion of perfect geometry yields to the revelation of organicism, and curiosity about what is hidden is rewarded by the drama of the revealed. Behind Mythology, on the far wall, stands what is arguably an even more dramatic installation, perhaps even the soul of the show: African Reflection. Eighteen slabs lined up like oversized bullion bars, the piece consists of three groupings of six slabs apiece, each group in a primary color. A panoply

of halogens penetrates each slab, throwing spokes of light in crisscrossing patterns across the concrete floor. These monochromatic slabs recall the kimono jackets Kaneko designed for his textile experiments of the late 1970s, which he revisited in 2006 in costume sketches for his production design for Opera Omaha’s Madama Butterfly. Seven feet tall, these great slabs, in their physical stature, sheer number, precise spacing, and elemental chromaticism, have an unspeakable, stupefying effect. There is something decidedly otherworldly and archetypal about them, like so many colorized replications of the black monolith in Stanley Kubrick’s 2001: A Space Odyssey. Against the wall to the left of African Reflection lean the three slabs that make up Liquid Velocity 3. Transparent except for lines and parabolas in primary colors, this triad makes a wry, understated commentary on its imposing neighbor. Along the opposite wall, in small side rooms, are more slabs, each of which seems devoted to advancing a particular conceptual kernel. The leftmost room contains the slabs that Kaneko had turned around. In the next are

says. “Should I add a diagonal? Just adding a diagonal changes so many elemental issues. It’s actually a very aggressive act.” As in Mythology, Translucent Angle is participatory for the viewer. Its surface changes with the angle of approach, its matte surface from the front giving way to glamorous, swimming-pool shine from the opposite vantage. From some angles, you cannot see the piece’s foot at all, and the slab seems to float unsupported. Ghostly, arcane, this piece and the rest are objets mystérieux whose only fathomable purpose seems to be to communicate the roots of a language. Kaneko’s semantic experiments put one in mind of the Pioneer and Voyager spacecrafts launched in the 1970s, which bear diagrams intended to communicate basic information about Earthlings and our solar system, should the spacecrafts ever be

“In glass, it’s possible to see inside the shape.” intercepted by intelligent extraterrestrial life. One plaque bears a drawing of a man and woman, a perspective of the sun’s location in the Milky Way, and a schematic of the hydrogen atom, the most abundant element in the known universe. Kaneko’s breaking down of the language of marks and colors into fundamental oppositions and axioms has the whiff of a similar, almost scientific approach to aesthetic reductivism. He goes about this via tactics that are alternately magisterial (African Reflection), playful (Colorbox), and cagey (Mythology). It is perhaps surprising that the artist’s best-known work in ceramics—the oversized, dumpling-like “Dangos” he has been making since the 1980s—address Easter Islandlike impenetrabilities by way of biomorphic forms, and yet in glass work, he utilizes pristine geometric structures. “For me,” he says, “the geometric is more natural for the material and techniques [of glass]. I could make something

Jun Kaneko in residence at the Bullseye factory studios, 2006

very organic with glass—it’s possible, and maybe someday I will—but for now, I’m very interested in translucence: how light transmits through the slab. You can’t get translucence in ceramics except on a very thin glaze. If I made these exact shapes in ceramics, it wouldn’t be the same. In glass, it’s possible to see inside the shape.” Even with all their lightplay and chromatic adventurism, the works in New Glass come across, finally, as no less inscrutable or intriguing than Kaneko’s ceramic enigmas. It is possible, they suggest, to look into a heart that is crystal-clear and still not divine its mysteries.

A contributor to ARTnews, Art, Ltd., and Glass Quarterly, Richard Speer is the author of Matt Lamb: The Art of Success (John Wiley &amp; Sons) and is visual arts critic at Willamette Week, the Pulitzer Prize-winning alternative weekly in Portland, Oregon. He has written about cultural matters for Newsweek, Salon, The Los Angeles Times, and Opera News.

Representing over three years of collaboration between Jun Kaneko and Bullseye, this project resulted in the creation of a body of works in glass that are both monumental in scale and groundbreaking in their material approach. Essay by Richard Speer. Commentary by Lani McGregor. (Part 1 of 2) 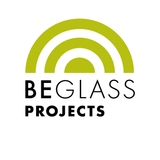