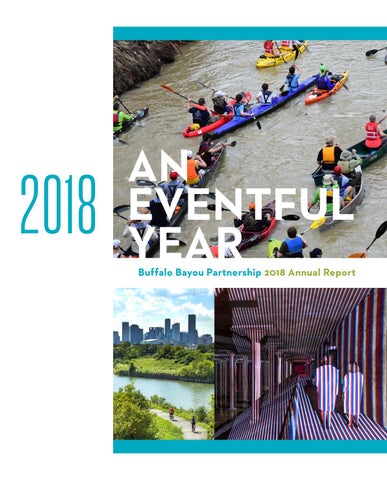 DEAR FRIENDS, What an eventful year for Buffalo Bayou Partnership! Whether it was new creative programming, successful changes to our annual Kids Day and Regatta, or our second major art installation in the Buffalo Bayou Park Cistern, BBP’s board and staff worked hard to activate the waterway’s trails and green spaces. It also was an eventful year as we held a variety of community engagement activities for our Buffalo Bayou East Master Plan. How exciting it was to hear East End and Fifth Ward residents’ ideas for transforming the stretch of Buffalo Bayou from downtown to the Port of Houston Turning Basin. While we launched first-time recreational and cultural offerings, and continued our signature events, we also worked on new initiatives focused on Buffalo Bayou’s restoration and beautification. We joined with five other environmental groups in the project, Headwaters to Baywaters, and kicked off a new bayou cleanup program with the Texas Conservation Corps and Harris County District Attorney’s office. In Buffalo Bayou Park, the redesigned Johnny Steele Dog Park and other landscape changes, ensured that future maintenance will be carried out at the highest level possible. And perhaps the most momentous park accomplishment was the final clean up after Hurricane Harvey. In 2018, records also were broken as Buffalo Bayou Park permit/ concession, boat tour and gala revenue exceeded all expectations. We also began event rentals at the historic Sunset Coffee Building at Allen’s Landing that also houses the organization’s administrative offices. All of us at Buffalo Bayou Partnership are proud of our accomplishments. We extend our thanks to the many donors, volunteers, governmental officials and community stakeholders who have worked alongside us for decades. All have played a vital role in making Buffalo Bayou what it is today. And as we reflect back and celebrate 2018, we look forward to many eventful years ahead. Sincerely,

Dogs and their owners were thrilled when the Johnny Steele Dog Park reopened after improvements were made including: a new, separate entry portal for small dogs; expanded lawns; and the creation of one pond for all dogs with a seating ledge. The changes to the dog park have dramatically enhanced the siteâ&amp;#x20AC;&amp;#x2122;s overall functionality for visitors as well as the Buffalo Bayou Park maintenance team.

Each year, our organization relies on volunteers to care for Buffalo Bayou Park and all of the green spaces and trails that we maintain along the bayou. In 2018, we welcomed 3,500 individuals who contributed 10,500 hours of service. In June, BBP hosted a Volunteer Appreciation Brunch to thank all of the many individuals who contributed their time and energy to help us clean up after Harvey.

Over 800 new trees, 600 of which were donated by Apache Corporation, and 10,000 plants were installed throughout the year.

BBP also presented new wellness programming at Buffalo Bayou Park including Sunrise Yoga and expanded walking tour offerings. In addition, we partnered with Discovery Green and Emancipation Park on the Bayou City Music Series. This concert series, made possible by the Kinder Foundation, honored the great jazz, blues and zydeco musicians of Houston and Southeast Texas with free performances held throughout the year at the three parks.

BBPâ&amp;#x20AC;&amp;#x2122;s May opening of the second art installation in the Buffalo Bayou Park Cistern received extensive local and national media attention. The organization commissioned the late Franco-Venezuelan artist Carlos Cruz-Diez to create a site-specific work that filled the space with a dazzling projection of continuously moving chromatic modules. The Cistern welcomed over 34,000 visitors throughout the year.

Hike and bike trails are key to linking the many parks and other destinations along Buffalo Bayou and also allow neighborhoods to be connected. BBP is working on several projects that will provide a continuous trail from Buffalo Bayou Park to Lockwood Drive.

In partnership with Harris County, Harris County Flood Control District and the Bayou Greenways program, and thanks to a catalyst $1 million donation from BBP Chair Emeritus Sis Johnson and her husband Hasty, BBP will construct a downtown trail segment extending from Allen’s Landing through several Harris County properties, and a parking lot at the corner of Austin and Commerce streets. From there, the trail will head east where it will be constructed on property owned by CenterPoint Energy. Design of both of these vital trail segments was completed in 2018. East of downtown, the Texas Department of Transportation began construction of a trail across the Houston Housing Authority’s Clayton Homes property and a pedestrian bridge (pictured left) that will link the north and south banks of Buffalo Bayou. BBP Chair Emeritus Mike Garver generously contributed $500,000 to this key trail segment.

2018 marked the sixteenth year of Buffalo Bayou Partnership’s Clean &amp; Green Program, an initiative to remove trash and debris from Buffalo Bayou, its tributaries and the Port of Houston with the assistance of community service workers.

At year’s end, over 1,500 cubic yards of trash and debris were collected which equals 138 commercial dump truck loads. BBP also initiated a program with Texas Conservation Corp and the Harris County District Attorney’s office to expand our cleanup efforts that are essential to the ongoing transformation of Buffalo Bayou.

On-the-ground due diligence, rigorous technical analysis including a hydrological study, and a framework to guide our land acquisition program have all been part of the work accomplished in 2018. This major planning effort will continue the organizationâ&amp;#x20AC;&amp;#x2122;s legacy of transformative parks, trails and open space. We spent a large part of 2018 presenting a robust community engagement program with over 700 Fifth Ward and East End residents and stakeholders sharing their desires, dreams and concerns for their neighborhoods. Well-attended and insightful focus groups and meetings were held at BakerRipley, The DeLuxe Theater and the Seafarers International Union.

For the past two years, BBP has been focused on a master plan for the bayouâ&amp;#x20AC;&amp;#x2122;s east sector that encompasses the area from US 59 to the Port of Houston Turning Basin.

To communicate the priorities of the Buffalo Bayou East Master Plan, BBP co-hosted Encounter: Meeting Points on Buffalo Bayou, a collaboration between students from the University of Houston Graphic Design and Creative Writing Programs. This exhibit featured six interactive installations that expressed ideas about the bayouâ&amp;#x20AC;&amp;#x2122;s relationship to the East End and Fifth Ward communities.

Land acquisition along the bayouâ&amp;#x20AC;&amp;#x2122;s east sector has been a high priority for BBP over the past 15 years. In 2018 with funding from The Brown Foundation, Houston Endowment and The Wortham Foundation, BBP purchased an important 5.6-acre site along Navigation Boulevard known as Turkey Bend. Acquiring this strategically located property will allow BBP to develop a significant waterfront destination.

In April, Alison and Chris Porter co-chaired BBP’s second annual Dinner at The Dunlavy with proceeds supporting our continued efforts to restore Buffalo Bayou Park after Hurricane Harvey. BBP offered over 100 tours aboard our pontoon boat including guided history tours, trips to view the Waugh Bat Colony, and holiday-themed outings like Cupid Cruises. Our organization also co-presented popular events throughout the year like Unsilent Night with University of Houston-Downtown and Blanket Bingo at Market Square Park with Downtown Management District.

In addition to thousands of recreational users, Houstonians and visitors to the city flocked to the bayou shores for BBP’s signature events and unique programming offered throughout the year.

BBP presented the 12th annual KBR Kids Day at Guadalupe Park Plaza and welcomed close to 7,000 children and their families for this free event featuring hands-on educational activities, performances and fun! The organization’s November gala, Color Outside the Lines, was a dazzling success bringing in close to $600,000 in support of BBP’s general operating budget. Over 400 canoes and kayaks participated in the 46th Annual Buffalo Bayou Partnership Regatta. Paddlers began the 15-mile race at San Felipe just west of Voss and made their way downtown to a new finish at Allen’s Landing.

Maria Ines Sicardi and José Solis at the preview of Carlos Cruz-Diez at the Cistern: Spatial Chromointerference

Alison Porter, James and Tricia Zucker, and Chris Porter at Dinner at The Dunlavy

Rich and Nancy Kinder at the preview of Carlos Cruz-Diez at the Cistern: Spatial Chromointerference

In-Kind Apache Corporation Please know every effort was made to ensure that the information published is accurate and reflects the requests of individual donors. If any inadvertent errors or omissions have occurred, please notify Buffalo Bayou Partnership’s Director of Development.

Controller Director of PR and Events 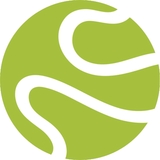