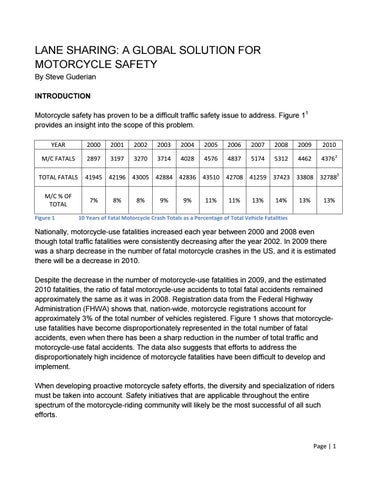 LANE SHARING: A GLOBAL SOLUTION FOR MOTORCYCLE SAFETY By Steve Guderian INTRODUCTION Motorcycle safety has proven to be a difficult traffic safety issue to address. Figure 11 provides an insight into the scope of this problem. YEAR

Nationally, motorcycle-use fatalities increased each year between 2000 and 2008 even though total traffic fatalities were consistently decreasing after the year 2002. In 2009 there was a sharp decrease in the number of fatal motorcycle crashes in the US, and it is estimated there will be a decrease in 2010. Despite the decrease in the number of motorcycle-use fatalities in 2009, and the estimated 2010 fatalities, the ratio of fatal motorcycle-use accidents to total fatal accidents remained approximately the same as it was in 2008. Registration data from the Federal Highway Administration (FHWA) shows that, nation-wide, motorcycle registrations account for approximately 3% of the total number of vehicles registered. Figure 1 shows that motorcycleuse fatalities have become disproportionately represented in the total number of fatal accidents, even when there has been a sharp reduction in the number of total traffic and motorcycle-use fatal accidents. The data also suggests that efforts to address the disproportionately high incidence of motorcycle fatalities have been difficult to develop and implement. When developing proactive motorcycle safety efforts, the diversity and specialization of riders must be taken into account. Safety initiatives that are applicable throughout the entire spectrum of the motorcycle-riding community will likely be the most successful of all such efforts.

DISCUSSION Potential safety efforts can be compared to similar developments in other industrialized countries. For example, throughout Europe and Asia, motorcycles are allowed to “traffic filter.” This is the operating technique by which a motorcyclist proceeds into the lane space between vehicles traveling in the same direction on a multi-lane roadway. That is, there is unused roadway space between vehicles in two adjacent lanes large enough for motorcycles to use to filter through stopped or slow moving traffic. Seemingly counter-intuitive, trafficfiltering is actually a viable safety technique that removes the motorcycle and rider from the danger spot behind a stopped car, and places the motorcycle into the more secure safety envelope that is created between two larger vehicles. Information from the US National Highway Traffic Safety Administration (NHTSA) suggests that rear-end collisions are the most common type of collision dynamic for all vehicles in the United States. Safety measures that can effectively reduce the occurrence of this type of impact would enhance motorcycle safety on American roadways. In most of the fifty US states, traffic filtering by motorcycles is not overtly permitted by statute or ordinance. Indeed, it is often tacitly discouraged through enforcement of peripheral traffic laws, such as unsafe passing, passing on the right, or speed; too fast for conditions. One exception is the State of California where “lane-sharing” -- a term that describes virtually the same technique as Europe’s traffic-filtering -- is not expressly prohibited by law. Furthermore, California is one of the largest motorcycling states with some of the worst traffic congestion in the nation. Lane-sharing is a common safety technique practiced by many of the state’s motorcyclists. Since California is the only state in the US that Figure 2 (Courtesy of Dan Carter) does not expressly prohibit lane-sharing, a comparison with other states with similar riding conditions, such as similar riding weather, riding conditions, and/or a large motorcycle riding population, indicates differences between California and those states regarding rear-end collisions. In an effort to standardize the comparison between states, the rear-end fatal crash rate per 100,000 registered motorcycles were assessed. The results are shown in Figure 2. Figure 2 shows that California does have a lower rate of fatal rear-end motorcycle crashes when compared to other similar motorcycling states. This figure also shows that the rate of fatal rear-end collisions in California is also lower than the national rate, which includes many states with a limited riding season and fewer motorcycle riders. Page | 2

In general there are two possible rear-end collision situations involving motorcycles. One is where the motorcycle is struck in the rear by another vehicle; the other is where the motorcycle collides into the rear of another vehicle. Figure 3 looks at these two conditions as a percentage of all probable conditions in which a motorcycle fatality might occur. The chart in figure 3 shows that when compared to other states, California has fewer Figure 3 Courtesy of Dan motorcycle deaths involving a motorcycle rearCarter ending another vehicle, and significantly fewer deaths from a motorcycle being rear-ended by another vehicle. The two previous charts have shown that with respect to fatal rear-end collisions involving motorcycles, California has lower numbers than comparable US states. An additional consideration when looking at rear-end motorcycle fatalities is how California compares with all fatal rear-end collisions. Figure 4 shows this comparison. Figure 4 Courtesy of Dan Carter This graph shows that the &quot;all vehicle fatal rear-end crashes&quot; percentage is about the same for the three states, and the US percentage is somewhat lower. Motorcycle rear-end impact deaths as a percentage of all motorcycle deaths is quite a bit higher than the all-vehicle rear-end impact percentage in Florida (12.7% vs. 8.5%), Texas (10.8% vs. 7.5%), and the US (9.0% vs. 6.2%). In California, the percentages(8.5% vs. 7.3%) are closer, and they are lower than the comparison states. It could be argued that the lower California percentage is attributable to the practice of lane-sharing.

Moving a motorcycle from behind traffic to a position next to traffic changes the risk to the motorcycle. All crash situations will comply with physical laws. Comparing the collision dynamics of a rear-end impact to a motorcycle involved in a lane-sharing accident reveals that lane-sharing represents a safer overall situation for motorcyclists. A motorcycle that is lane-sharing is no longer exposed to the full-force of a rear-end impact. Rather, the dynamic is more similar to a sideswipe lane-changing impact, which is an incomplete force contact. Page | 3

The motorcycle and the car are basically traveling in the same direction so any contact between the two is limited to the minor motion of the car moving into the adjacent lane. This means there is a less forceful contact to the motorcycle and rider. When a motorcycle is stopped behind another vehicle and is impacted from the rear, the motorcycle and rider are exposed to an in-line contact. This corresponds with a full-force contact, where the full amount of the striking vehicleâ&amp;#x20AC;&amp;#x2122;s kinetic energy or momentum is transferred directly to the motorcycle. Consider a common 5 mph rear-end contact. An average motorcycle, weighing about 550 lbs. is completely stopped when it is struck on the rear-end by an average car, weighing about 2500 lb., traveling at about 5 mph. In this described dynamic, the motorcycle will be accelerated forward to a speed of about 4 mph in about one-tenth of a second. The chances are very high that the rider will be launched from the motorcycle in some manner, and will suffer injuries. In a lane-sharing crash the rider has a good chance of staying on the motorcycle instead of being thrown to the ground. Some additional considerations when comparing a rear impact into a motorcycle with a lane change type of contact into a motorcycle; 1. In a lane change impact, the rider has a chance to recover and remain upright. This is unlikely in a direct rear-end contact. 2. In a lane change impact, the rider has a chance to take evasive action to avoid the contact altogether. This is unlikely in a rear-end impact. 3. If the rider does go down in a lane change contact, the potential injuries are not as severe as those in a direct rear-end contact. In other words, when a motorcycle is lane-sharing if a crash with a vehicle does occur, the effects of the crash will most likely be less serious to the rider than a contact into the motorcycle rear end. SUMMARY Motorcycle safety and the reduction of fatal and injury motorcycle collisions is a difficult issue to address for multiple reasons. In general, safety efforts might need to be unorthodox or even creative. In comparison with other countries around the globe, the US is the only industrialized nation that does not commonly allow traffic-filtering or lane-sharing for motorcycle riders. To the contrary, in some states lane-sharing is expressly prohibited. The exception to the traffic-filtering prohibition is California where lane-sharing is routinely practiced by a high percentage of riders in congested traffic conditions. Yet, despite significant traffic congestion and a higher number of motorcycles on the roadway, with the high number of motorcycles lane-sharing, the statistics show California has one of the lowest Page | 4

rates of rear-end motorcycle collisions. There are also physical aspects to rider safety associated with lane-sharing when compared to being stopped in traffic. The physical laws associated with crashes shows that lane-sharing represents a less hazardous crash than being rear-ended. This information provides a strong indication of the safety advantages of lane-sharing. Similarly, European studies indicate that lane-sharing was a factor in less than 1% to 5% of motorcycle crashes4. However, more study and information is necessary in order to provide conclusive information regarding the safety or hazards of motorcycle lanesharing in the US. Lane-sharing is a safety technique that can positively affect all riders regardless of the type of motorcycle ridden or the riding style applied. This makes outreach or education programs easier to disseminate to the riding community. Furthermore, lane-sharing will likely have strong support within the riding community. It is important to note that like all driving actions it is possible to lane-share in an unsafe manner. It is not the purpose of this paper to discuss these actions or how to safely laneshare. These actions can be addressed in a program or study that evaluates lane-sharing as a safety-countermeasure. It is also important to note that any governmental entity that evaluates lane-sharing as a safety measure can also enact restrictions or permissions, and conduct a safety campaign to promote lane-sharing. Additionally, the author realizes this paper leaves many questions unanswered and raises additional questions. These unanswered questions are best discussed in a forum or meeting on lane-sharing.