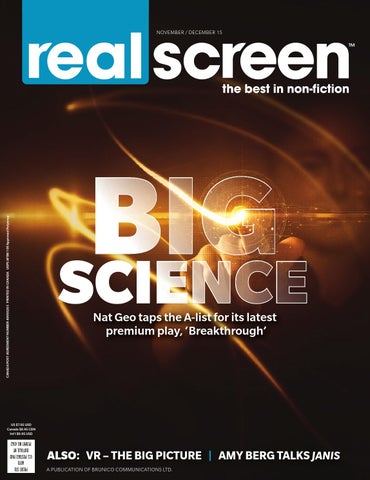 Are you our next winner?

To submit your entries go to awards.realscreen.com

november / december 15 DiscoveryVR intends to teach viewers How to Survive in the Wild through immersive content.

Three science projects that tackle breakthroughs and big questions; a chat with Science Channel’s Marc Etkind ...................... 16 Couldn’t make it to Realscreen London? See what you missed in our photo page.

OF VICE AND ITS VIRTUES

all knew one during our formative years, and some of you may have been fortunate enough to be one – the Cool Kid who would saunter nonchalantly through the high school corridors, all eyes cast enviously upon him or her. Some of us would be invited into the Cool Kid’s inner circle and, as the loyal entourage, would not only get to bask in the Kid’s glory, but would also have a little bit of the shine rub off on us as well – or so we would hope. For some time now, Vice Media has been the modern media equivalent of the Cool Kid. Whether it’s been through Vice’s virtual cornering of the millennial market, its ability to develop monetization models that work in the online content space, or the canny dealmaking prowess displayed by CEO Shane Smith, the Vice brand has been inextricably linked to two trains steaming their way through the content and media industries today – disruption and expansion. Both of those trains can actually run in tandem with each other, and don’t have to be on a collision course, and the recent deals struck by Vice Media in the television sector – outlined on page 9 – illustrate that. Sure, many believe that Vice – with its stable of 11-and-counting online channels – is leading the charge in sounding a digitally-driven death knell for television. But anyone who has followed the moves made by the company over the years – from its beginnings as a free, alternative publication based in Montreal, to its forays into books, ﬁlms, music and eventually, TV content via its programming for HBO – knows that multimedia penetration has always been a top priority. And while some recent stats and studies concerning viewership, cord-cutting and cordnevers may provide digital doomsayers with ammunition for proclaiming that linear is dead – or even worse, irrelevant – the dealmakers and their dollars tell a different story. If, as speculated, Vice is moving towards an IPO, then amassing more cash and scale through myriad international TV deals – be they cable or free-to-air – won’t hurt the cause. As Smith told the Financial Times in late 2014, in advance of the “deal spree” of this year, “There’s no time in the foreseeable future when Vice will not be doing a major media deal.” Sounds rather platform-agnostic to me. And while some may argue that the joint ventures with A+E in the U.S. and Rogers in Canada point towards a “cash for cachet” bid by the more traditional media companies, it just might prove to be smart business for them to be aligned with a brand that possesses such intense loyalty from a coveted, hard-to-reach demographic. It is true that some newer millennial-focused networks have struggled to break through with big hits, and while Vice’s “voice” continues to connect with growing audiences worldwide online, one might wonder how its irreverent style (sample Vice story: “Inside London’s Hedonistic, Polyamorous Unicorn Movement”) will translate on a 24-hour cable channel. One might also ask how the proliferation of deals could dilute Vice’s “outsider” status among its core audience. But I view this cross-pollination with excitement and a little bit of hope. From a programming perspective, a little infusion of digital daredevilry could do wonders for linear. If the Cool Kid wants to come over to hang, why would you say no? Cheers, Barry Walsh Editor and content director realscreen

All letters sent to realscreen or its editors are assumed intended for publication. Realscreen invites editorial comment, but accepts no responsibility for its loss or destruction, howsoever arising, while in its ofﬁce or in transit. All material to be returned must be accompanied by a stamped, self-addressed envelope. Nothing may be reproduced in whole or in part without the written permission of the publisher. ISSN number 1480-1434