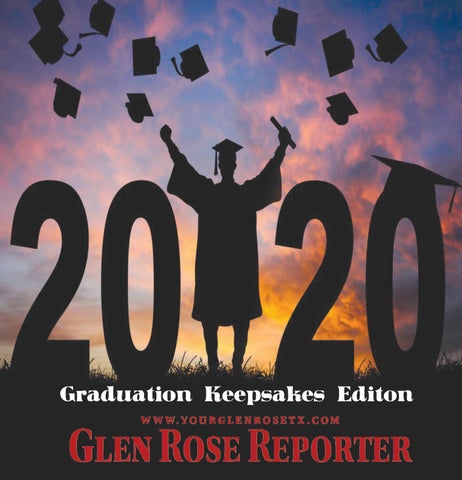 2020 Glen Rose High School Graduates Valedictorian Drew Dunson hoping best is yet to come Drew Dunson, valedictorian of the senior Class of 2020, got some advice that helped inspire him to keep striving to do his best even beyond the halls of Glen Rose High School. “I had a cousin who told me, ‘Don’t peak in high school.’ He was top of his class,” said Dunson, whose cousin graduated from high school in Indiana, and now attends academically prestigious Northwestern University. “He was trying to tell me not to make high school my best years — to always try to improve myself,” said Dunson, who tops the Class of Drew Dunson {photo courtesy of 2020 with a grade-point average of Lori Gray Photography} 107.632. “I was always pretty academically driven, but in high school I definitely focused really hard to

do as well as I could.” Dunson will also be attending a prestigious university starting this fall, but he chose one in Texas. He will be pursuing his undergraduate studies at the McCombs School of Business at the University of Texas this fall. As for what line of work he has in mind, Dunson indicated that will be decided later. “I always knew I wanted to go to the University of Texas. I may pursue my master’s there also. I definitely want to do something with a financial background, but I don’t have anything super specific at the moment,” Dunson said. “Possibly investment management or investment banking.” Dunson said that when GRHS Principal Kelly Shackelford notified him that he was officially named valedictorian, he was “kind of at a loss for words,” and added, “It was cool seeing all the time and hours I put in over the last four years pay off. I had a good idea that I was first still, but I don’t like to take things for granted.” Dunson is the GRHS Student Body president, and vice president of the Senior Class. He is co-president of the school’s National Honor Society, and is a member of the Spanish National Honor Society. Dunson was

nominated by school faculty members and chosen to participate in the Texas Boys State program. He has also found time to participate in sports, making the varsity football team as a senior, playing varsity basketball his junior year, and playing the past two years on the Tigers varsity tennis team. “I always envisioned the end goal,” Dunson said of his extracurricular activities. “You’ve got to have a little fun along the way. There are ways to have fun that don’t negatively affect your grades. It’s all about time management.” In addition to the cousin who offered inspirational words, Dunson wanted to make sure to give proper credit to his parents, Stephen and Jennifer Dunson, saying they “have made numerous sacrifices for me,” adding, “I wouldn’t have been able to accomplish this without them.” Dunson has two older brothers — Ryan, 22, a recent graduate of Ohio State University, and Collin, 19, who is attending the University of Arkansas. Ryan was in the Ohio State marching band, and the family traveled to watch him perform multiple times over the last few years. “I’m definitely ready for college and the next chapter to start,” Dunson said. “But I’m definitely going to miss my friends around the school.”

The salutatorian of Glen Rose High School’s Class of 2020 didn’t have to look far for an excellent scholastic role model. Joel Mendoza earned the No. 2 ranking with a grade-point average of 104.608. One of his sisters, Andrea Mendoza, was the GRHS salutatorian in 2018. And Joel, like his sister, will attend Texas A&M University. He plans to major in environmental geo science. He noted that his No. 1 driving force to do well in school came from his parents, Joel and Irma Mendoza. “My motivation has been my

parents,” said Joel, who is a native of Glen Rose. “They didn’t have the resources I have. They just wanted to put me in a position where I could succeed.” Joel is a crane operator and his mother is a homemaker. They also have another daughter, 25-year-old Karina Mendoza, who studied cosmetology at Hill College after graduating from GRHS. When he received the official word from Principal Kelly Shackelford about being the salutatorian, Mendoza said that the first thing he thought of was, “All that hard work has finally paid off.” He added, “There were times when it got stressful, but I knew in the end it would pay off.” He said he couldn’t name just one favorite subject in school, but it was a tossup between science and math. His least favorite was social studies. As for his eventual occupation goal, Joel said, “Right now I don’t know specifics, but I just know I want to work in natural conservation.”

He explained that he wants to “find alternatives from the fossil fuels, and find more environmentally friendly alternatives.” Mendoza said that he and valedictorian Drew Dunson are good friends, not only from taking several classes together but also from the fact they both attend St. Rose of Lima Catholic Church. In addition to being a National Honor Society member, Mendoza is secretary of the school’s Workforce Industry Training program. Up until this year, he was a member of FFA. Mendoza participated in UIL academic events all four years in high school. He was the 2019 UIL state champion in copy editing. As a ninth-grader, Mendoza was a member of the GRHS freshman boys basketball team. Once he arrives in College Station and officially joins his sister as an Aggie, Mendoza said, “I’ll definitely be homesick, but having my sister there will probably make it less difficult.”

The reviews are in, and those who attended the Glen Rose High School graduation on May 22 at Tiger Stadium seemed to agree it was a perfect sendoff for the Class of 2020. The night was capped off by fireworks launched from the roof of the Tiger Activity Center next to the stadium, as a spectacular surprise ending. The ceremony’s perfect appearance came with a couple of assists — from Mother Nature, and from Assistant Principal Jason Pounds. The start of the ceremony was moved up by about 35 minutes, in hopes of avoiding the rain that was in the forecast. As it turned out, the rainstorm ended up drifting north of town. And the plan to have an audio quote from each graduate was foiled by a technical glitch. But school officials had prepared a printout of the comments, which Pounds read aloud for the teachers, parents and classmates to enjoy. “I still think it was an awesome ceremony,” GRISD Superintendent Wayne Rotan said of the event, which marked the first time since 1972 the school had its commencement outside. The students’ on-campus experience ended, of course, in a less-than-perfect way in early March because of the COVID-19 pandemic that prompted the shutdown of schools. “It was surreal to see it all come together,” GRHS valedictorian Drew Dunson said as he was walking off the field following the ceremony. “Like, this was really satisfying.” Rotan said, “hard work came together” to have “a memorable graduation, for all the things they missed.” Rotan introduced Judy May as the Tiger’s Eye award recipient for the 2019-20 school year. A new feature this year was having a parent or other

special person designated by each graduate to hand them their diploma as they crossed the stage. Normally, members of the GRISD school board perform this duty. In his speech, Dunson said, “The Class of 2020 is very special. Not many other classes can say they survived a worldwide pandemic. God can do crazy things in life, and while the world tends to focus more on the negative effects of the virus, a lot of positive lessons can be learned from this.” Dunson continued, “As a class, we have been through more than we could have imagined. We have faced challenges that none of us could have expected. The reason we overcame those difficulties, though, was because of our resilient attitude. “When we leave here today, celebrate what you have accomplished, but look forward to the future. I encourage each of you to find a dream that you want to achieve, and go for it. Become involved in your community to not only help the people you know, but to also help the people you don’t know. And most importantly, always strive for the betterment of yourself and those around you, because if you aspire for something that is greater than yourself, you will live a very purposeful life.” Dunson wrapped it up by saying that even though the class members are going their own separate ways, “We will all be able to call Glen Rose home.” In his speech, Class of 2020 salutatorian Joel Mendoza said, “The past couple of months were a test to see if we were mentally strong and determined enough to finish the last few weeks of our senior year, and the Class of 2020 passed that test. I am heartbroken that March 6 was our last day of school, and none of us were able to know this beforehand. “We weren’t allowed an opportunity to say thank you and goodbye to our teachers, classmates, or the staff in

the building that taught us so much, whether it was the quadratic formula or life lessons. But we must not let this ongoing depression prevent us from moving on with our lives; instead, we should use it as motivation to work harder and strive for success in the universities, colleges, technical schools, or military programs that lie ahead.” Mendoza continued, “I hope that the Class of 2020 will not be remembered as the class that underwent the coronavirus pandemic; I want us to be remembered as the class that overcame this difficult obstacle by manifesting selflessness, patience, and persistence.” Mendoza’s sister, Andrea Mendoza, was the salutatorian of the GRHS Class of 2018 — which was the school’s second-largest class ever, with 127 graduates. TOP 10 PERCENT The GRHS graduates whose grade-point averages ranked in the top 10 percent of the class were (in order): Drew Dunson, Joel Mendoza, Orrin Miller, Kimberly Sanchez, Kennedy Overton, Richard Sanford, Kathryn Burroughs, Jacob Merrill, Juliana Melendez, Avery Turner, Isabelle McDonald, Abby Payne and Brandt Moore. NATIONAL HONOR SOCIETY The National Honor Society members for the Class of 2020 were: Jessica Guadalupe Alvarado, Damaris Zuniga Ayala, Breanna Kate Baker, Molly Elizabeth Beauchamp, Dan Oscar Coates, Salma Guadalupe De Reza De Loera, Andrew Stephen Dunson, Citlally Salazar Espino, Jaqlyn Elaine Evans, Hailey Brook Ibarra, Kali Nicole Matthews, Juliana Nayelli Melendez, Joel Mendoza Jr., Orrin Dean Miller, Brandt Samuel Moore, Marc Aiden Moss, Kennedy Michelle Overton, Abby Rose Payne, Sarah Caitlin Reilly, Kimberly Renee Sanchez, and Avery Heart Turner.