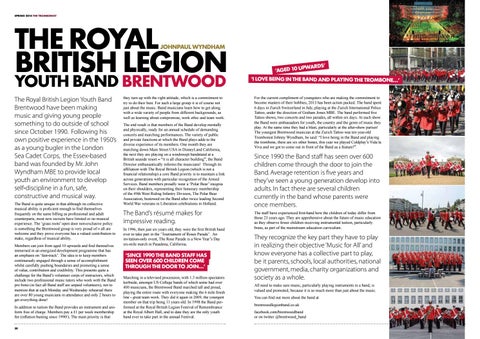 The Royal British Legion Youth Band Brentwood have been making music and giving young people something to do outside of school since October 1990. Following his own positive experience in the 1950’s as a young bugler in the London Sea Cadet Corps,  the Essex-based band was founded by Mr. John Wyndham MBE to provide local youth an environment to develop self-discipline in a fun, safe, constructive and musical way. The Band is quite unique in that although its collective musical ability is proficient enough to find themselves frequently on the same billing as professional and adult counterparts, most new recruits have limited or no musical experience. The ‘grass roots’ open door non-exclusive policy is something the Brentwood group is very proud of – all are welcome and they prove everyone has a valued contribution to make, regardless of musical ability. Members can join from aged 10 upwards and find themselves immersed in an energized development programme that has an emphasis on ‘fast-track’. The idea is to keep members continuously engaged through a sense of accomplishment whilst carefully pushing boundaries and promoting a sense of value, contribution and credibility. This presents quite a challenge for the Band’s volunteer corps of instructors, which include two professional music tutors who work with the Band pro bono (in fact all Band staff are unpaid volunteers), not to mention that at each Monday and Wednesday rehearsal there are over 80 young musicians in attendance and only 2 hours to get everything done! In addition to tuition the Band provides an instrument and uniform free of charge. Members pay a £1 per week membership fee (inflation busting since 1990!). The main priority is that 30

they turn up with the right attitude, which is a commitment to try to do their best. For such a large group it is of course not just about the music. Band musicians learn how to get along with a wide variety of people from different backgrounds, as well as learning about compromise, work ethic and team work. The end result is that members of the Band develop mentally and physically, ready for an annual schedule of demanding concerts and marching performances. The variety of public and private functions at which the Band plays adds to the diverse experience of its members. One month they are marching down Main Street USA in DisneyLand California, the next they are playing on a windswept bandstand at a British seaside resort – “it is all character building”, the Band Director enthusiastically informs the musicians! Through its affiliation with The Royal British Legion (which is not a financial relationship) a core Band priority is to maintain a link across generations with particular recognition of the Armed Services. Band members proudly wear a ‘Polar Bear’ insignia on their shoulders, representing their honorary membership of the 49th West Riding Infantry Division, The Polar Bear Association, bestowed on the Band after twice leading Second World War veterans in Liberation celebrations in Holland.

The Band’s résumé makes for impressive reading. In 1996, then just six years old, they were the first British band ever to take part in the ‘Tournament of Roses Parade’. An invitation-only event, The Rose Parade is a New Year’s Day six-mile march in Pasadena, California.

‘Since 1990 the Band staff has seen over 600 children come through the door to join…’ Marching in a televised procession, with 1.5 million spectators kerbside, amongst US College bands of which some had over 400 musicians, the Brentwood Band marched tall and proud, playing the entire route with everyone making the 6 mile finish line - great team work. They did it again in 2009, the youngest member on that trip being 11 years old. In 1998 the Band performed at the Royal British Legion Festival of Remembrance at the Royal Albert Hall, and to date they are the only youth band ever to take part in the annual Festival.

pwards’ u 0 1 d e g ‘a ‘I love being in the Band and playing the trombone…’ For the current compliment of youngsters who are making the commitment to become masters of their hobbies, 2013 has been action packed. The band spent 6 days in Zurich Switzerland in July, playing at the Zurich International Police Tattoo, under the direction of Graham Jones MBE. The band performed five Tattoo shows, two concerts and two parades, all within six days. At each show the Band were ambassadors for youth, the country and the genre of music they play. At the same time they had a blast, particularly at the after-show parties! The youngest Brentwood musician at the Zurich Tattoo was ten year-old Trombonist Johnny Wyndham, he said: “I love being in the Band and playing the trombone, there are six other bones, this year we played Coldplay’s Vida la Viva and we got to come out in front of the Band as a feature!”.

Since 1990 the Band staff has seen over 600 children come through the door to join the Band. Average retention is five years and they’ve seen a young generation develop into adults. In fact there are several children currently in the band whose parents were once members. The staff have experienced first-hand how the children of today differ from those 23 years ago. They are apprehensive about the future of music education as they observe fewer children receiving instrumental tuition, particularly brass, as part of the mainstream education curriculum.

They recognize the key part they have to play in realizing their objective ‘Music for All’ and know everyone has a collective part to play, be it parents, schools, local authorities, national government, media, charity organizations and society as a whole. All need to make sure music, particularly playing instruments in a band, is valued and promoted, because it is so much more than just about the music. You can find out more about the band at brentwoodlegionband.co.uk facebook.com/brentwoodband or on twitter @brentwood_band 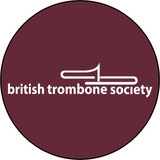