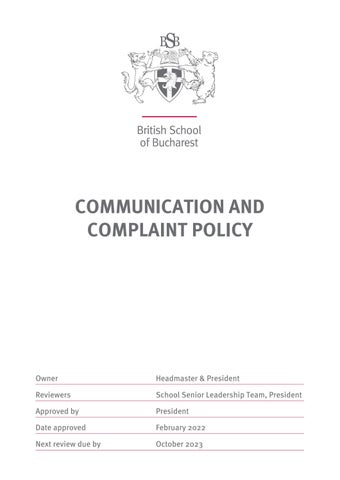 1. PURPOSE INTRODUCTION British School of Bucharest (BSB) prides itself on the quality of the teaching and pastoral care provided to its pupils. However, if parents do have a complaint, they can expect it to be treated by the School with care and in accordance with this procedure. BSB makes its complaints procedure available to all parents of pupils and of prospective pupils on the School’s website in accordance with the Standards for British Schools Overseas.

2. POLICY STATEMENT WHAT CONSTITUTES A COMPLAINT? A complaint is an expression of dissatisfaction with a real or perceived problem. It may be made about the School as a whole, about a specific department or about an individual member of staff. A complaint is likely to arise if a parent believes that the School has done something wrong or failed to do so something that it should have done or acted unfairly. Parents can be assured that all concerns and complaints will be treated seriously and confidentially except where legal requirements permit or require access. BSB is here for the pupils and we assure parents that raise a complaint, that their child will not be penalised in any way as a result.

TIMEFRAME FOR DEALING WITH COMPLAINTS All complaints will be handled seriously and sensitively. BSB encourages parents to raise any concerns as soon as possible. We aim to respond to all complaints in a timely manner. Knowledge of the complaint will be kept confidential and limited to those directly involved. The exception to this is in the case of local legal requirements permitting access. Complaints will be acknowledged by the School within five working school days if received during term time and as soon as practicable during holiday periods. It is in everyone’s interest to resolve a complaint as speedily as possible. If the complaint is lodged during term-time, the School will aim to complete the first stage of the procedure within 10 working school days and a further 20 working days if the complaint proceeds to Stage 2. Complaints will be addressed as soon as practicable during holiday periods. Stage 3, the Appeal Panel Hearing, will be completed within a further 20 working school days if the appeal is lodged during termtime, and as soon as practicable during holiday periods. Please note that, for the purposes of this procedure, ‘school working days’ refers to weekdays (Monday to Friday) during term time. Where the complaint is of a complex or serious nature, including when requiring the involvement of external agencies, it may be necessary to extend the timescale for resolution. If this is the case the school will write giving information concerning the reason for the delay and when it expects to be in a position to resolve the complaint.

3. PROCEDURE This process will be coordinated by the Office Admin, with the exception of complaints about the Headmaster. The procedures will be tracked (see Appendix 1).

STAGE 1 – INFORMAL RESOLUTION It is anticipated that most complaints will be resolved quickly and informally. See appendix 2 for our Informal Resolution form. If parents have a complaint, they should contact the relevant teacher (Primary), form tutor (Secondary) or subject specialist in the first instance. This can be done by emailing office@britishschool.ro or requesting a meeting. In many cases, the matter will be resolved straight away to the parents’ satisfaction. If the form teacher or tutor cannot resolve the matter alone, it may be necessary for them to consult a more senior colleague. Complaints made directly to a more senior member of staff will usually be referred to the relevant form teacher or Key Stage Coordinator unless a more senior member of staff deems it appropriate for them to deal with the matter personally. If a parent wishes to make an informal complaint about a member of staff and the natural person to raise this with is related, then the complaint should be directed to a more senior person within the school. For example, if a concern is raised about a teacher in the Secondary School and their head of faculty is related to them, then the concern should be raised or directed to the Director of Studies (Deputy Head of Secondary) or Head of Secondary. If a complaint relates to the Head of Primary or Secondary, the complaint should be directed to the Headmaster at this stage. If the complaint relates to the Headmaster, it will be directed to the President of Crawford House. Should the matter not be resolved satisfactorily within 10 working school days then parents will be advised to proceed with their complaint in accordance with Stage 2 of this procedure.

STAGE 2 – FORMAL RESOLUTION If the complaint cannot be resolved on an informal basis then the parents should put their complaint in writing to the Head of Primary or Secondary as appropriate, or the Headmaster (see Appendix 3). The Heads of School will decide, after considering the complaint, the appropriate course of action to take. In most cases, the Head will speak to the parents concerned, normally within 5 working school days of receiving the complaint, to discuss the matter and to outline how they propose to proceed. If possible, a resolution will be reached at this stage. It may be necessary for further investigations to be carried out. All records of meetings and details in relation to the complaint will be documented. Once all of the relevant facts have been established and documented, a decision will be made, and parents will be informed of this decision in writing or in person in accordance with the timeframe above. The reasons for the decision will be given. If the complaint is against one of the Heads of School or the Headmaster, the President of Crawford House will call for a full report from the Headmaster and for all the relevant documents. The President may also call for a briefing from members of staff, and will in most cases, speak to or meet with the parents to discuss the matter further. Once the President is satisfied that, so far as is practicable, all of the relevant facts have been established, the parents will be informed of the decision in writing in accordance with the timeframe above. The President will give reasons for the decision. It is hoped that parents are satisfied with the outcome and their concerns have been fully and fairly considered. In circumstances where this is not the case, they should proceed to Stage 3 of this procedure by informing the School no later than 28 days from the date of the decision from stage two of this procedure.

STAGE 3 – FORMAL: PANEL HEARING If parents seek to invoke Stage 3 (following a failure to reach an earlier resolution) they can do so by writing to the President of Crawford House requesting a panel hearing (see Appendix 4). A panel of three people not directly involved in the matters detailed in the complaint will be nominated by the President of Crawford House. One panel member must not be a school manager or involved in the running of the school. Parents can attend the panel accompanied if they wish to do so. The panel should convene within 20 working days (or as soon as reasonably practicable during holiday periods) of Stage 3 being requested. After due consideration of all facts they consider relevant, the Panel will make findings and may make recommendations. If possible, the Panel will resolve the parents’ complaint without the need for further investigation. Where further investigation is required, the Panel will decide how it should be carried out. A copy of the Panel’s findings and recommendations (if any) will be sent by email or otherwise given to the complainant, and, where relevant, the person complained about within 7 working days of the hearing (although additional time may be required if it is necessary to carry out further investigations following the hearing). The decision of the Panel will be final. A copy of the Panel’s findings and recommendations will also be made available for inspection on the school premises by the Proprietor and the Headmaster.

VEXATIOUS COMPLAINTS AND HARASSMENT Very occasionally the School may judge that a complainant is behaving in an unreasonable manner when raising and / or pursuing concerns. These complaints may be characterised by being unreasonably persistent or aggressive and their actions may cause distress to a member of the School. In such circumstances the School will: • •

All complaints will be reviewed termly to ensure resolutions are tracked.

Head of Primary/ Secondary or the Headmaster

Decision of the Panel: