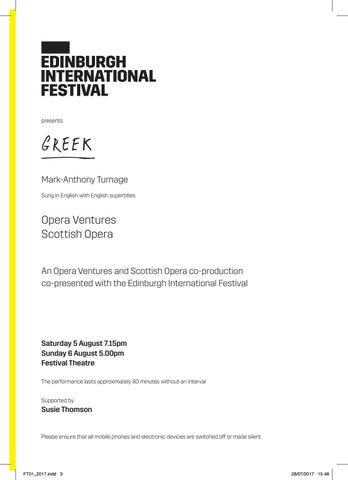 By arrangement with Schott Music Ltd, London This production has been made possible with generous support from Sarah Billinghurst and Howard Solomon, and Denise Coates Foundation; with additional support from the KT Wong Foundation and the Boltini Trust All photographs taken in rehearsal by Jane Hobson

To Create, You Must Destroy I have been writing about punk rock for the last few decades and have been involved in the punk scene for far longer, but I am always surprised when a new play, ballet or art exhibition is laudably described as ‘punk rock’. For a movement declared ‘dead in the water’ every year or so since its inception, ‘punk’ seems to be a resilient term. It is often misused but it is an accurate way of describing the kind of radical innovation on the part of an author or director who is attempting something new and disregarding the conventions of genre and narrative. It is a term that has frequently been applied to Mark-Anthony Turnage’s opera Greek. The Paris Review in 2011 referred to the choreographer Karole Armitage, who has performed with Baryshnikov, as the ‘punk ballerina’ because of the radical nature of her choreography. If you call a play Punk Rock, as Simon Stephen did in 2009, you expect the audience to watch it with preconceptions. In his book Art and Revolution (1969), the esteemed critic John Berger wrote that while the ‘freedom of art’ can potentially render an artistic work meaningless outside the context of where and when it was created, that same freedom allows art to ‘express and preserve the profoundest expectations of a period’. Punk, to many people who were not around at its origin, represents something revolutionary, pure and authentic. The term is used to signify that the work of art one is about to experience is in some way breaking new ground — or at least going against conventional expectations. The ideas behind punk, about do-it-yourself, reinvention and rebellion, are still relevant to the arts. Punk was not just a musical style or a particular look or fashion but an elemental force of nature, a chained Ariel broken free who was trying to destroy prevailing conventions but at the same time was barely hiding an ill-conceived reverence for the past; that past was a bricolage, endlessly re-formed, re-consumed and destroyed again in a mad hero’s never-ending journey. Punk was thus both subversive and reverential of a mythical past when everything was purer — or at least less commodified. The punk movement from the 1970s to the present was subtly and (sometimes less subtly) influenced by major artistic movements dating back over a hundred years. Jon Savage’s England’s Dreaming (1991), for example, revealed the connections between (mostly) British punk and such movements as Dada, Fluxus and the Situationists, as did the writings of Guy Debord, particularly his Comments on the Society of the Spectacle (1988). Jamie Reid, the resident artist and designer for the Sex Pistols, has long acknowledged his debt to the Situationists, and

Malcolm McLaren, who managed the band, had flirted with ‘Fluxus, pop art and Andy Warhol’ before moving into the visual arts and fashion design. The members of two seminal punk bands, The Weirdoes in Los Angeles and Suicide in New York, were as much performance artists as they were musicians; Suicide’s maniacal lead singer, Alan Vega, later sold his more conventional paintings in galleries to much acclaim. Other bands had even more direct connections to art movements, for example Throbbing Gristle, the Ramones, Devo, Talking Heads, the Screamers. Thus in its earliest incarnations, punk was intertwined with other art forms, perhaps partly because the genre was born as much from art school angst as from working-class anger. In his book Lipstick Traces: A Secret History of the Twentieth Century (1989) the critic Griel Marcus emphasizes how important punk rock was as an artistic statement, not just a manifesto but also an inspiration. To Marcus, ‘What was irreducible about the music of the Sex Pistols was its desire to change the world’; he concludes that it was ‘no more than an art statement, but such statements, communicated and received in any form, are rare’. As Marcus pointed out, the formal Dadaist theory that ‘art could be made out of anything matched the formal punk theory that anyone could make art’. In his seminal work Subculture: The Meaning of Style (1979), Dick Hebdige wrote that most art movements are eventually commodified and resold. That was one of the theories of the Frankfurt School in the 1930s. Does that imply that punk as a

movement is dead and exists now only in museums and through such artefacts as clothes, badges and records? Many people look back nostalgically to the time when they were part of a punk scene that they suppose ended long ago. But what if punk isn’t dead? What if it has the same potential to re-create, delight and confound as it did over 40 years ago? In earlier publications I have defended punk as a precursor of the modern definition of a meme (more along the lines of Richard Dawkins’s theory in The Selfish Gene than its internet application) or an infectious virus. Most viruses are considered unpleasant, but one also has to remember that a vaccine is an altered virus, designed to make the body stronger and more resistant. If one accepts the idea of punk as a virus, the fact that it is sold as souvenirs does not diminish it. Punk is thus a recurring and reinvented idea that appears everywhere — from Malaysia to Mexico — in new and joyfully reimagined ways. Punk continues to inspire because it does not have a single definition and is not confined to one particular time but stands in the context of other great art movements of the last century or more. Its continuing resilience is both a continuation of previous movements as much as a repudiation of them. Punk asks — or rather demands — that artists push through boundaries and reimagine the arts or risk stagnation. In the end punk was not just a movement but a challenge. © Brian Cogan Brian Cogan is an Associate Professor in the Department of Communications at Molloy College, New York; his many writings on popular culture and politics include The Punk Rock Encyclopedia (2008) Essay on how punk rock has influenced the arts for the program for Mark Anthony Turnage's modern opera, "Greek" at the Edinburgh Internation...

Essay on how punk rock has influenced the arts for the program for Mark Anthony Turnage's modern opera, "Greek" at the Edinburgh Internation...