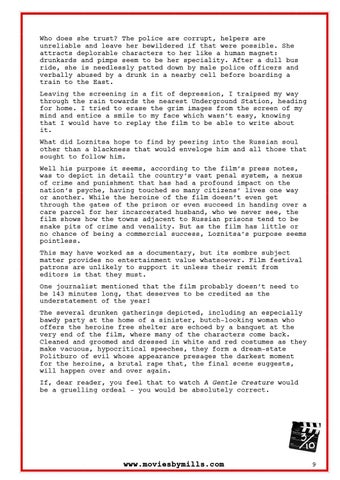 Who does she trust? The police are corrupt, helpers are unreliable and leave her bewildered if that were possible. She attracts deplorable characters to her like a human magnet: drunkards and pimps seem to be her speciality. After a dull bus ride, she is needlessly patted down by male police officers and verbally abused by a drunk in a nearby cell before boarding a train to the East. Leaving the screening in a fit of depression, I traipsed my way through the rain towards the nearest Underground Station, heading for home. I tried to erase the grim images from the screen of my mind and entice a smile to my face which wasn’t easy, knowing that I would have to replay the film to be able to write about it.

What did Loznitsa hope to find by peering into the Russian soul other than a blackness that would envelope him and all those that sought to follow him. Well his purpose it seems, according to the film’s press notes, was to depict in detail the country’s vast penal system, a nexus of crime and punishment that has had a profound impact on the nation’s psyche, having touched so many citizens’ lives one way or another. While the heroine of the film doesn’t even get through the gates of the prison or even succeed in handing over a care parcel for her incarcerated husband, who we never see, the film shows how the towns adjacent to Russian prisons tend to be snake pits of crime and venality. But as the film has little or no chance of being a commercial success, Loznitsa’s purpose seems pointless. This may have worked as a documentary, but its sombre subject matter provides no entertainment value whatsoever. Film festival patrons are unlikely to support it unless their remit from editors is that they must. One journalist mentioned that the film probably doesn’t need to be 143 minutes long, that deserves to be credited as the understatement of the year! The several drunken gatherings depicted, including an especially bawdy party at the home of a sinister, butch-looking woman who offers the heroine free shelter are echoed by a banquet at the very end of the film, where many of the characters come back. Cleaned and groomed and dressed in white and red costumes as they make vacuous, hypocritical speeches, they form a dream-state Politburo of evil whose appearance presages the darkest moment for the heroine, a brutal rape that, the final scene suggests, will happen over and over again. If, dear reader, you feel that to watch A Gentle Creature would be a gruelling ordeal – you would be absolutely correct.