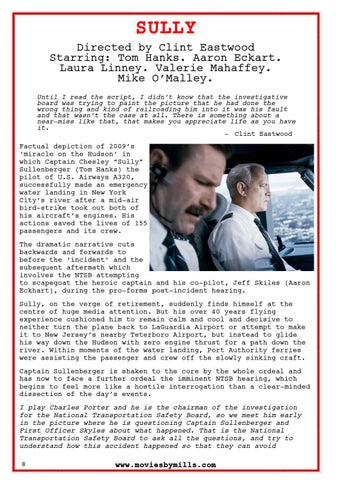 SULLY Directed by Clint Eastwood Starring: Tom Hanks. Aaron Eckart. Laura Linney. Valerie Mahaffey. Mike O’Malley. Until I read the script, I didn’t know that the investigative board was trying to paint the picture that he had done the wrong thing and kind of railroading him into it was his fault and that wasn’t the case at all. There is something about a near-miss like that, that makes you appreciate life as you have it. - Clint Eastwood

Factual depiction of 2009’s ‘miracle on the Hudson’ in which Captain Chesley “Sully” Sullenberger (Tom Hanks) the pilot of U.S. Airways A320, successfully made an emergency water landing in New York City’s river after a mid-air bird-strike took out both of his aircraft’s engines. His actions saved the lives of 155 passengers and its crew. The dramatic narrative cuts backwards and forwards to before the ‘incident’ and the subsequent aftermath which involves the NTSB attempting to scapegoat the heroic captain and his co-pilot, Jeff Skiles (Aaron Eckhart), during the pro-forms post-incident hearing. Sully, on the verge of retirement, suddenly finds himself at the centre of huge media attention. But his over 40 years flying experience cushioned him to remain calm and cool and decisive to neither turn the plane back to LaGuardia Airport or attempt to make it to New Jersey’s nearby Teterboro Airport, but instead to glide his way down the Hudson with zero engine thrust for a path down the river. Within moments of the water landing, Port Authority ferries were assisting the passenger and crew off the slowly sinking craft. Captain Sullenberger is shaken to the core by the whole ordeal and has now to face a further ordeal the imminent NTSB hearing, which begins to feel more like a hostile interrogation than a clear-minded dissection of the day’s events. I play Charles Porter and he is the chairman of the investigation for the National Transportation Safety Board, so we meet him early in the picture where he is questioning Captain Sullenberger and First Officer Skyles about what happened. That is the National Transportation Safety Board to ask all the questions, and try to understand how this accident happened so that they can avoid 8