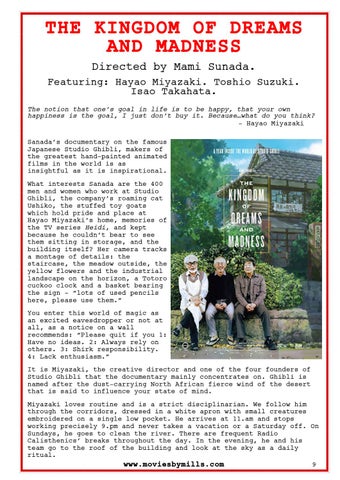 THE KINGDOM OF DREAMS AND MADNESS Directed by Mami Sunada. Featuring: Hayao Miyazaki. Toshio Suzuki. Isao Takahata. The notion that one’s goal in life is to be happy, that your own happiness is the goal, I just don’t buy it. Because…what do you think? - Hayao Miyazaki Sanada’s documentary on the famous Japanese Studio Ghibli, makers of the greatest hand-painted animated films in the world is as insightful as it is inspirational. What interests Sanada are the 400 men and women who work at Studio Ghibli, the company’s roaming cat Ushiko, the stuffed toy goats which hold pride and place at Hayao Miyazaki’s home, memories of the TV series Heidi, and kept because he couldn’t bear to see them sitting in storage, and the building itself? Her camera tracks a montage of details: the staircase, the meadow outside, the yellow flowers and the industrial landscape on the horizon, a Totoro cuckoo clock and a basket bearing the sign – “lots of used pencils here, please use them.”

You enter this world of magic as an excited eavesdropper or not at all, as a notice on a wall recommends: “Please quit if you 1: Have no ideas. 2: Always rely on others. 3: Shirk responsibility. 4: Lack enthusiasm.” It is Miyazaki, the creative director and one of the four founders of Studio Ghibli that the documentary mainly concentrates on. Ghibli is named after the dust-carrying North African fierce wind of the desert that is said to influence your state of mind.

Miyazaki loves routine and is a strict disciplinarian. We follow him through the corridors, dressed in a white apron with small creatures embroidered on a single low pocket. He arrives at 11.am and stops working precisely 9.pm and never takes a vacation or a Saturday off. On Sundays, he goes to clean the river. There are frequent Radio Calisthenics’ breaks throughout the day. In the evening, he and his team go to the roof of the building and look at the sky as a daily ritual. 9 www.moviesbymills.com