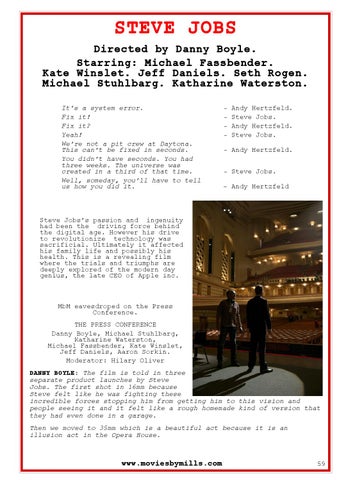 STEVE JOBS Directed by Danny Boyle. Starring: Michael Fassbender. Kate Winslet. Jeff Daniels. Seth Rogen. Michael Stuhlbarg. Katharine Waterston. It’s a system error. Fix it! Fix it? Yeah! We’re not a pit crew at Daytona. This can’t be fixed in seconds. You didn’t have seconds. You had three weeks. The universe was created in a third of that time. Well, someday, you’ll have to tell us how you did it.

Steve Jobs’s passion and ingenuity had been the driving force behind the digital age. However his drive to revolutionize technology was sacrificial. Ultimately it affected his family life and possibly his health. This is a revealing film where the trials and triumphs are deeply explored of the modern day genius, the late CEO of Apple inc.

MbM eavesdroped on the Press Conference. THE PRESS CONFERENCE Danny Boyle, Michael Stuhlbarg, Katharine Waterston, Michael Fassbender, Kate Winslet, Jeff Daniels, Aaron Sorkin. Moderator: Hilary Oliver DANNY BOYLE: The film is told in three separate product launches by Steve Jobs. The first shot in 16mm because Steve felt like he was fighting these incredible forces stopping him from getting him to this vision and people seeing it and it felt like a rough homemade kind of version that they had even done in a garage. Then we moved to 35mm which is a beautiful act because it is an illusion act in the Opera House.