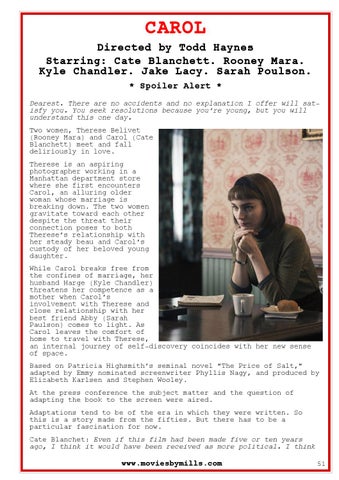 CAROL Directed by Todd Haynes Starring: Cate Blanchett. Rooney Mara. Kyle Chandler. Jake Lacy. Sarah Poulson. * Spoiler Alert * Dearest. There are no accidents and no explanation I offer will satisfy you. You seek resolutions because you’re young, but you will understand this one day.

Two women, Therese Belivet (Rooney Mara) and Carol (Cate Blanchett) meet and fall deliriously in love. Therese is an aspiring photographer working in a Manhattan department store where she first encounters Carol, an alluring older woman whose marriage is breaking down. The two women gravitate toward each other despite the threat their connection poses to both Therese’s relationship with her steady beau and Carol’s custody of her beloved young daughter. While Carol breaks free from the confines of marriage, her husband Harge (Kyle Chandler) threatens her competence as a mother when Carol’s involvement with Therese and close relationship with her best friend Abby (Sarah Paulson) comes to light. As Carol leaves the comfort of home to travel with Therese, an internal journey of self-discovery coincides with her new sense of space. Based on Patricia Highsmith’s seminal novel “The Price of Salt,” adapted by Emmy nominated screenwriter Phyllis Nagy, and produced by Elizabeth Karlsen and Stephen Wooley. At the press conference the subject matter and the question of adapting the book to the screen were aired. Adaptations tend to be of the era in which they were written. So this is a story made from the fifties. But there has to be a particular fascination for now. Cate Blanchet: Even if this film had been made five or ten years ago, I think it would have been received as more political. I think