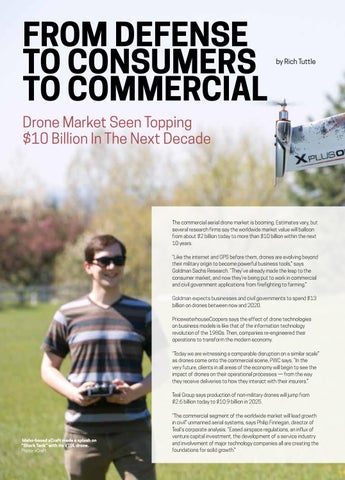 FROM DEFENSE TO CONSUMERS TO COMMERCIAL

Drone Market Seen Topping $10 Billion In The Next Decade

The commercial aerial drone market is booming. Estimates vary, but several research firms say the worldwide market value will balloon from about $2 billion today to more than $10 billion within the next 10 years. “Like the internet and GPS before them, drones are evolving beyond their military origin to become powerful business tools,” says Goldman Sachs Research. “They’ve already made the leap to the consumer market, and now they’re being put to work in commercial and civil government applications from firefighting to farming.” Goldman expects businesses and civil governments to spend $13 billion on drones between now and 2020. PricewaterhouseCoopers says the effect of drone technologies on business models is like that of the information technology revolution of the 1980s. Then, companies re-engineered their operations to transform the modern economy. “Today we are witnessing a comparable disruption on a similar scale” as drones come onto the commercial scene, PWC says. “In the very future, clients in all areas of the economy will begin to see the impact of drones on their operational processes — from the way they receive deliveries to how they interact with their insurers.” Teal Group says production of non-military drones will jump from $2.6 billion today to $10.9 billion in 2025.

Idaho-based xCraft made a splash on “Shark Tank” with its VTOL drone. Photo: xCraft.

“The commercial segment of the worldwide market will lead growth in civil” unmanned aerial systems, says Philip Finnegan, director of Teal’s corporate analysis. “Eased airspace regulations, an influx of venture capital investment, the development of a service industry and involvement of major technology companies all are creating the foundations for solid growth.”

ABI Research says suppliers of small drones to the military like AeroVironment, Aeryon Labs and Elbit Technologies, as well as consumer drone companies like 3D Robotics, DJI, Parrot, Yuneec and others are “aggressively targeting the commercial sector through acquisitions, internal development, partnership and investment.” It’s because the commercial sector “is where the greatest long term growth opportunity lies,” says Philip Solis, ABI’s research director. He sees the market growing from $1.3 billion in 2016 to $11.2 billion in 2021. He ranks the world’s top seven drone companies this way: China’s DJI; Sensefly, owned by Parrot Group of France; Hexagon of Germany; Aeryon of Canada; 3D Robotics of the U.S., and Delair-Tech of France. Drones in commercial use face some hurdles, including safety, privacy, and availability of insurance coverage, according to PWC. But assuming such hurdles can be cleared, analysts say flying drones will see ready application in agriculture and construction. Solis says film and media applications are surpassing those of agriculture. Other hot areas include insurance, energy, infrastructure inspection, security, mining, turnkey services, telecommunications, real estate and delivery. (More use cases will be discussed at AUVSI’s Xponential 2017 conference and exhibition in Dallas.) In fact, scores, possibly hundreds, of industries may be revolutionized by drones. They are attractive because they promise to do jobs faster, safer and less expensively.

Mergers and Acquisitions One indication of the strength of the commercial drone market is the fact that big companies have acquired drone businesses. Google, Facebook and Intel fall into this category. Intel, for instance, has acquired two German companies, MAVinci and Ascending Technologies, and has invested in China’s Yuneec. Disruption in several forms is evident among the drone companies themselves. For one thing, there’s a shakeout in the personal market, which has begun to overlap with the professional market, largely because the financial opportunities are more attractive. Mota Group, headquartered in San Jose, Calif., is one of a number of drone-makers that started in the personal market and is shifting to commercial. “Now you can fly business class,” its website says. China’s DJI, the unquestioned leader of the global nonmilitary drone market with some 70 percent of the pie, is seeing one aspect of this shakeout with its popular Mavic personal drone. Mavic folds up to fit in a deep pocket or backpack, and was designed for fun stuff — shooting videos of rock-climbing adventures, for instance. But another company is turning it into a professional tool for collecting crop health data. Sentera, a Minneapolis developer of remote sensing technologies, says that with its mods, the Mavic can simultaneously capture visualband RGB color, near-infrared, and normalized difference vegetation index (NDVI) data, and interpret it in the field, which “ensures precision while saving time.”

DJI’s view is that the potential for Mavic to shift from personal to professional wouldn’t have been there if quality hadn’t been designed in from the start. “Unless you want a toy of a couple of hundred bucks, it’s going to be fairly hard to build a drone that is solid and strong and stable,” says DJI spokesman Adam Lisberg. He declines to speak about specific competitors, but says that, in general, they’ve had trouble matching DJI’s products. One such competitor is Yuneec. DJI has sued it for patent infringement. GoPro, another DJI competitor, aimed to boost its camera business with the Karma drone. The Karma was recalled after instances of losing power in flight, and in the market itself, but is back again — and again going up against DJI. 3D Robotics, once the biggest maker of consumer drones in the U.S., wanted its Solo drone to compete with DJI’s Phantom. But a series of troubles, including production difficulties, crushing competition from DJI and a faulty GPS system, ended the plan, according to Forbes. Do difficulties like GoPro’s Karma losing power and GPS troubles with 3D Robotics’ Solo mean that, while hardware may be fine, better software is a route to market dominance? “I think it’s both,” says Lisberg. Refinements in both areas are “moving up the chain,” he says. Things like obstacle avoidance systems, for instance, depend on new hardware and software. “They’re going hand in hand, but you’ll really see an explosion on the software side of things.” One reason for that, he says, is the demand for autonomy, which will require “a big software advance,” which in turn will require hardware advances like “a more precise maneuverability handler and more precise reporting of data and positioning and aircraft interaction.”

market-leading advance. That keeps us going and keeps some of our engineers staying up all night too.”

Lots of Competition As well they should, because there’s no lack of competitors. Idahobased xCraft, for instance, believes it has a market-beater with its patented design that takes off and lands vertically but transitions to high-speed forward flight. “We started in the consumer market to build interest and build our brand, and we are now branching into the commercial space” with the X2, a tricopter VTOL, says xCraft CEO JD Claridge. “Our niche is primarily the hybrid VTOL capability, and that’s something that isn’t offered by DJI, at least currently, or by any of the major market players.” XCraft’s potential so impressed the business whizzes of ABC’s “Shark Tank” show that they jumped in with an unprecedented fiveway investment of $1.5 million.

IF THIS IS BUSINESS AS USUAL, THEN YOU MUST WORK WITH PEOPLE YOU

Lisberg makes it clear that DJI aims to stay on top of the personal and professional drone markets. He says the company was “started by four guys in a dorm room who were willing to work all night on some great ideas.” But, he says, “we’ve never lost the feeling that we continually are vulnerable to four guys in a dorm room somewhere coming up with their own great ideas.” This is why “we constantly push ourselves to do more and do better,” and “can’t assume that we’ll be the next ones coming up with the next great

We’re proud to provide the precise positioning technology many UAV manufacturers use to successfully execute dangerous and repetitive tasks without fear or fatigue, on each and every flight. The world’s leading companies trust us to find innovative, collaborative and effective global positioning and navigation solutions to achieve their goals. How can we help you?

XCraft’s potential so impressed the business whizzes of ABC’s “Shark Tank” show that they jumped in with an unprecedented five-way investment of $1.5 million. Another “Shark Tank” winner is DARTdrones of Scranton, Pennsylvania, which teaches the finer points of flying drones. When CEO Abby Speicher appeared on the show to pitch her company, she had 22 flight instructors. Now she has 45 instructors in over 40 cities and 4,000 students. “We’re also doing a lot of corporate and government training. We’ve trained the FBI, we’ve trained people from the Arizona Cardinals, CBS — a ton of really cool, big organizations.” She said such clients expect training on autonomy. On “Shark Tank,” she talked only about her flight training classes but now she’s offering several other courses, including preparation for the Federal Aviation Administration’s drone pilot test. Once this Part 107 test is passed, you can fly drones for business purposes. The venerable King Schools aviation educators are also offering Part 107 training, in partnership with AUVSI. At last check, in mid-March, the FAA had granted 318 waivers to the Part 107 small drone regulation, which says drones can only be flown under certain conditions, including within visual line of sight. Only three companies are currently allowed to fly farther than that, but it’s one of the keys to future wide-spread commercial drone operations. “Where [the commercial drone business] goes in the future is related to the transition from line of sight applications to beyond line of sight,” says ABI Research’s Solis. “To move towards things like delivery, you need beyond line of sight, and to do that you need to be tracked for regulatory compliance, for safety reasons and for integration” into the National Airspace System. And that’s where the planned Unmanned Aircraft System Traffic Management network, being developed by NASA and numerous industry partners, is needed, Solis says. Meanwhile, xCraft’s Claridge expresses the sentiment of most companies in the commercial drone business when he says that “people are starting to figure out how to use these things to make money, and we want to be there.”

The xCraft X2 competes in a competitive market that includes the likes of DJI and Yuneec. Photo: XCraft. 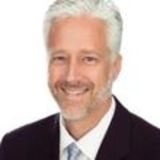 A look at the burgeoning commercial unmanned aircraft systems market.

A look at the burgeoning commercial unmanned aircraft systems market.