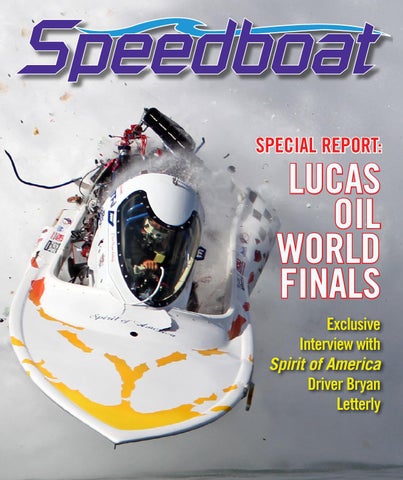 known as Firebird Raceway in Chandler, AZ—for the NAPA/Lucas Oil Drag Boat World Finals. Excellent weather all four days helped make it a stellar success, along with several record times and speeds.. In Pro Eliminator class, Dan Jensen drove his Without a Trace machine to the numbertwo qualifying spot. An eleven-boat field gave the #1 qualifier a bye run in the first round, and Jensen went all the way to the finals and took out the #1 boat to win the class. Meanwhile, Top Alcohol hydro owner/ driver Mike Fry, in Mean Streak II, qualified #2 and not only won the event, but took home the High Points World Championship. Vic Esposito didn’t fare so well in qualifying. Driving the Freak Show Pro Modified drag boat, he could only get to the #14 spot out of 21 entries. After taking out the current points leader, Marty Logan, in round 3, he then proceeded to take a bye run into the final where he squared off against the Desperado machine. Esposito ran a limited schedule for the 2014 season, but ended up on a high note with the World Finals win. Over 20 boats showed up for the newest class in Lucas Oil Drag Boat Racing Series. The Quick Eliminator class is a bracket class with a 1000 foot course. Number eleven qualifier Jerry Hardwick, driving the Texas Red hydro, had to go five rounds to take the win in this very competitive class. He finished up the year as the high-points runnerup in Division 2 Quick Eliminator category.

PE Class Dan Jensen in Pro Eliminator took his Without A Trace machine all the way to the finals and took out the #1 qualifying boat to win the class.

After qualifying 14th in a field of 21, Vic Esposito ended up on a high note with the World Finals win.

Pro Outlaw champ Jimmy Booher in round one of a Pro Mod battle with Travis Tuttle in Short Fuse.

Back in Black Crash

Greg Jones, owner of the Top Alcohol Flat Back in Black and son of the infamous Sonny Jones, went for a wild ride on Sunday. The boat was destroyed, and he was checked out at the on-site paramedic station. speedboat.com

Brandon Brodecki and Craig Murphy not only take the class win, but also won the overall points for the year.

In Top Fuel, Scotty Lumbert in MavTV/ Spirit of Texas passes Bryan Sanders in the Nitrochondriac for the win.

#11 qualifier Jerry Hardwick drives his Texas Red hydro had to go 5 rounds to take the win in Quick Eliminator.

Owner/driver Bob Winder took Mommaâ&#x20AC;&#x2122;s Diamond to the event win over a field of 12 entries.

In his first Top Alcohol Flat race, Ronnie Hays took Flying Dutchman to the win over a tough field of veteran drivers.

ne of the most dramatic photo sequences captured at the 2014 Lucas Oil World Finals was of Bryan Letterly’s devastating accident in the Spirit of America competitor. Letterly—who first raced competitively in 2010 campaigning a 2010 Cheyenne in Stock Eliminator class—is no stranger to on-water mishaps. During a Blue Water Casino Showdown in Parker, AZ, prior to the World Finals, he was involved in a crash after a flywheel came apart. This year, driving the 35-year-old Rogers Dragstar Spirit of America in Top Alcohol Flat class, he shook hands with the fickle finger of fate once again: The boat, powered by a 3200-hp engine built by the boat’s owner, John Cost of Kingman, AZ, was completely destroyed. We asked Letterly to describe what happened: “John Cost gave me the opportunity to pilot the Spirit of America Top Fuel Jet boat. I had recently gotten my pro license in Lake Havasu. The water in Chandler was obviously completely different. We had the detuned about 4 degrees, we were only running 10 percent nitro. We left the hardware the same, so it had no shoe to it and a little bit of nozzle. On the first pass, after the boat launched, I accidentally hit the diverter and the boat did a wheelie—it went straight up in the air. In the second and third run, the boat kept going to the right after takeoff, so I had to get back out of it and get back in it in order to get some data to the crew chief. Talking about it in the pits, we discovered that one of the cavitation plates was out of adjustment—one was lower than the other, which was causing it to go right. “After fixing that problem, we discussed the idea of running it hard, to its full potential. So on the next run, when I came out of the hole, she went straight, took a SPEEDBOAT

The newly assembled Top Fuel Jet Spirit of America, owned by John Cost and driven by Bryan Letterly, crashed after something on the jet drive broke. The capsule did its job; Letterly can be seen waving through the windshield.

the track and someone handed me a cold one. I walked up to John and said, So, are we building another one? He looked at my wife and said, ‘As long as it’s OK with her!’ She gave the thumbs up, so we’re building the new boat as we speak. I’m not sure what the new boat will be called, but we found another Dragstar. We’re making a mold and reconfiguring the hull. “We were able to salvage the engine, and everything on it checked out OK. We lost the plates on the back of the boat, but we got the rail kit and the intake back, as well as the gas tank and c02 bottle. The capsule is OK except for a scratch. “As we learned later, there was, in fact, a mechanical error in the pump that caused the crash. We will be going with a billet aluminum suction housing and stronger bowl that will be wrapped in carbon fiber. “Boating is my passion. Obviously, I like to go fast and take chances, so I’m gonna keep on doing it…. gonna keep on keeping on.” speedboat.com

In Top Alcohol Flat racing on Sunday, Mike Martin, in the injected flatty Dazed and Confused, got off to a rough start. The boat launched into the air, sending parts and capsule across the water. Martin will be back to race again. SPEEDBOAT 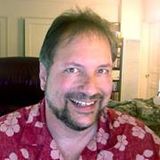 Our exclusive coverage of the Lucas Oil World Finals.

Our exclusive coverage of the Lucas Oil World Finals.