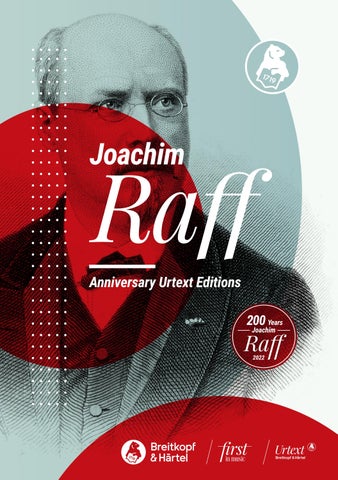 Joachim Raff unfolded his creativity in the close vicinity of both the »New German School« around Liszt and the »Traditionalists« around Brahms. Highly esteemed by his colleagues, Raff also succeeded gradually in convincing publishers and concert audiences of the quality of his numerous compositions: His chamber music works as well as his symphonies enjoyed great popularity not only among connoisseurs and now deserve to regain a permanent place in the concert repertoire.

Urtext ed. by Ulrich Mahlert EB 8993 The three piano sonatas by Joachim Raff occupy a special position among his more than 100 piano pieces. They reflect a significant compositional aspiration, whereas Raff otherwise frequently leans towards the salon-music genre in his piano music. The sonatas represent Raff’s three main creative phases: The beginning of his composing career, the height of his fame as one of Germany’s then most-played composers, and the late creative phase with the second version of the Sonata op. 14.

EB 9412 Joachim Raff’s 12 piano pieces Frühlingsboten op. 55, originating in 1852/53, mark a new creative start in his compositional oeuvre. The title of the work, translated as “Heralds of Spring”, is multilayered: It refers not only to spring in nature but the words “Heralds of Spring” also indicate love’s spring, the blossoming of love for his future wife, the actress Doris Genast. In Frühlingsboten, Raff repeatedly demonstrates his ability to adapt idioms and compositional techniques from works by Liszt, Chopin, Mendelssohn, Schumann, and others. The pieces do nonetheless possess their own thoroughly original diction with a character spectrum just as diverse as their stylistic piano design.

Sonata for Piano and Cello

While Raff composed several well-known works for violin and piano, the present cello sonata is one of his few outstanding works for cello and piano. Incidentally, in the first edition, the score is headed “for piano and cello,” as was quite often the case in the 19th century, for instance with Brahms’s sonatas. This is also evident in the music: Cello and piano are equal partners that develop the musical material and are challenged both technically and artistically. This current edition contains an Urtext cello part as well as a part with markings by Claus Kanngiesser.

EB 9407 With his Six Morceaux, Raff created a collection of six short pieces with the aim of “pleasantly entertaining many a listener” and demonstrating that he was “also capable of writing something easy.” With the individual pieces varying in difficulty without losing any of their musical ambition, the collection is well suited for violin lessons. The most famous piece is probably the “Cavatina”. Arranged for various scorings during Raff’s lifetime, it continues to be one of the most popular encore pieces altogether.

Urtext ed. by Severin Kolb and Stefan König PB 5622 Study score EB 8939 Set of parts | No. 1 in D minor op. 77 EB 8940 Set of parts | No. 2 in A major op. 90 The two quartets are unequivocal works: orchestrallyconceived, full of energetic vigor, and at times uncompromisingly modern. They confidently continue the Beethoven tradition and attest at the same time to Raff’s intensive confrontation with Richard Wagner’s music during the Weimar years. In his chamber music, the composer wanted to achieve progress “in an inherently historical way” and “to ground the individual substance in existing forms.” The quartets, first published in 1860/62, found illustrious interpreters, among them, the Müller brothers’ renowned ensemble, to which opus 90 was also dedicated, and Joseph Joachim.

Joachim Raff’s Fifth Symphony “Lenore” op. 177, composed in 1872, reveals the composer as a representative of the middle ground between Neo-German aesthetics and the symphonic tradition. It owes its sobriquet to G. A. Bürger’s eponymous ballade, which is the programmatic basis of the final movement. Using this literary model, Raff oriented himself to the Berlioz “program symphonies” and the Liszt symphonic-poem concept, on the one hand, but on the other, he let the three preceding movements follow traditional symphonic form. Breitkopf &amp; Härtel is now presenting for the first time with this symphony an orchestral work by Raff in a modern Urtext edition.

Oratorio on Words from the Holy Scriptures | op. 212

Concerto for Violoncello and Orchestra

In collaboration with the Joachim-Raff-Archiv Lachen (CH) Design &amp; Typeset RAUM ZWEI | Leipzig Valid as of 15 May 2022. Errors excepted. B+H 164

Portrait of Joachim Raff: August Weger | engraving after a photograph from the 1870s (Joachim-Raff-Archiv/Collection Marty)Marty) 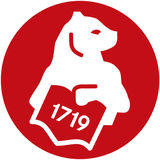