Fantasy Pieces for clarinet and piano 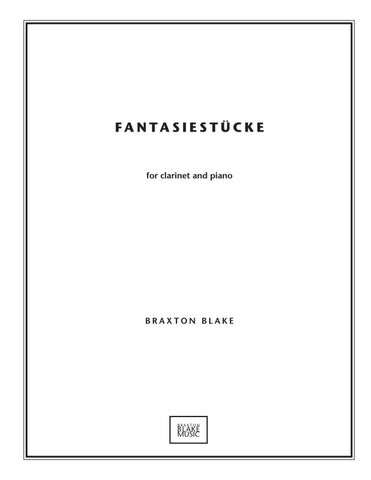 for clarinet and piano

The Fantasiestücke for clarinet and piano was composed in 1997 and consists of ﬁve movements. The ﬁrst is ﬂowing and somewhat fast, followed by a Presto (movement II). The third movement, again lyrical, is marked Largo, while the fourth, rather extroverted, is marked “in the manner of a Rag”. The ﬁnal movement begins with a theme followed by ﬁve variations. This work blends several disparate and subtle inﬂuences. Composed at a time when I was immersed in Schumann’s 4th Symphony, the lyrical passages of the Fantasiestücke are in homage to the irrepressible lyricism found throughout Schumann’s work. The more rapid passages reveal my admiration for the great swing clarinetists, Goodman and Shaw. (Never having been one to categorically avoid stylistic plurality, I have occasionally drawn upon and subtly incorporated the energy of jazz.) And there is one additional inﬂuence. While living in Germany, I occasionally took slow, overnight trains that stopped at even the smallest station. The crawl of the travel, the nocturnal shadows of the landscape, the cool air, and the solitude provided the fruitful inspiration for the conception and development of this work. The Fantasiestücke was composed for Jürgen Demmler, clarinetist with the Southwest German Radio Orchestra, Freiburg, and was ﬁrst performed on November 12, 1998, in Karlsruhe, Germany.

FANTASIESTÜCKE for Clarinet and Piano

* - Clarinet may end pitch earlier than notated, but with a diminuendo into niente.

ad lib. * - all grace notes in the lower register should be serene and relaxed.

gradually reduce the speed of the grace notes

Fantasy Pieces for clarinet and piano