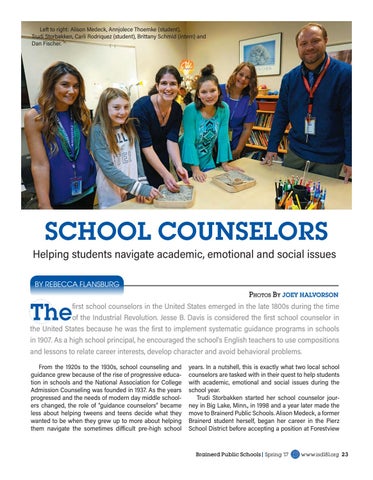 first school counselors in the United States emerged in the late 1800s during the time of the Industrial Revolution. Jesse B. Davis is considered the first school counselor in the United States because he was the first to implement systematic guidance programs in schools in 1907. As a high school principal, he encouraged the school’s English teachers to use compositions and lessons to relate career interests, develop character and avoid behavioral problems. From the 1920s to the 1930s, school counseling and guidance grew because of the rise of progressive education in schools and the National Association for College Admission Counseling was founded in 1937. As the years progressed and the needs of modern day middle schoolers changed, the role of “guidance counselors” became less about helping tweens and teens decide what they wanted to be when they grew up to more about helping them navigate the sometimes difficult pre-high school

years. In a nutshell, this is exactly what two local school counselors are tasked with in their quest to help students with academic, emotional and social issues during the school year. Trudi Storbakken started her school counselor journey in Big Lake, Minn., in 1998 and a year later made the move to Brainerd Public Schools. Alison Medeck, a former Brainerd student herself, began her career in the Pierz School District before accepting a position at Forestview 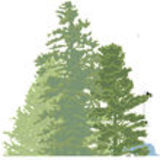 • Opportunity - Tessa Poorker: Poorker leaps into a new role as varsity gymnastics coach for both the high school and Community Ed teams. •...

• Opportunity - Tessa Poorker: Poorker leaps into a new role as varsity gymnastics coach for both the high school and Community Ed teams. •...