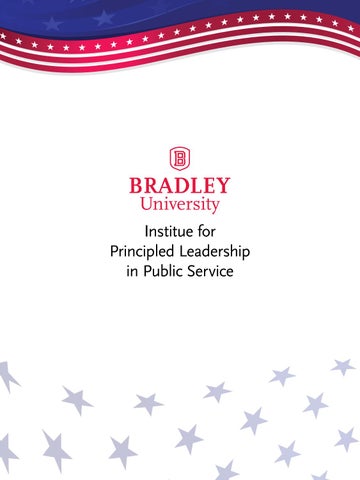 Two busloads of Bradley students traveled to Springfield, Illinois, to advocate for the Monetary Assistance Program that provides important scholarship money for a large number of Bradley students. In the center of the photograph are Illinois state legislators Sen. Dave Koehler, Rep. Jehan Gordon-Booth and former Sen. Dale Risinger.

““Taking a course on bipartisan leadership showed me the importance — at all levels of government — of listening to each other, treating each other with respect and finding common ground where possible.” — Megan Ramlo ’13

——— • ——— “The Institute does a great job of promoting civic engagement. As former student body president, I emceed a statewide rally of thousands of Illinois college students in Springfield on the restoration of Monetary Assistance Program scholarships and introduced then-Gov. Pat Quinn. By the end of the day, the Illinois General Assembly had voted to restore the scholarships.” — Kyle Malinowski ’11

e d u c a t i n g Ethical, Bipartisan, Civil &amp; Collaborative Leaders Two premier institutions, Bradley University and The Dirksen Congressional Center, joined forces in 2007 to launch the Institute for Principled Leadership in Public Service. Promoting a return to statesmanship at all levels of government, the Institute is a Midwestern think tank advocating for a bipartisan leadership approach to resolve America’s most pressing problems. The Institute promotes a return to statesmanship at all levels of government. The Institute’s mission is to educate and train ethical, bipartisan, civil and collaborative leaders for successful careers in public service. The Institute’s national public policy symposiums have included speeches by three members of President Barack Obama’s Cabinet on issues facing Congress: then-U.S. Secretary of Education Arne Duncan on “Transforming Public Education,” then–U.S. Secretary of Transportation Ray LaHood ’71 HON. ’11 on “The Future of Midwest Transportation” and U.S. Secretary of Agriculture Tom Vilsack on “The Future of Midwest Agriculture and Environmental Sustainability.” The Institute and Bradley University are positioned to be a national model for civic engagement of college students. By hosting voter registration rallies on campus, engaging students in the lobbying of state legislators and encouraging students to actively volunteer with campaigns or seek legislative internships, this goal will become a reality.

A Legacy of Principled Leadership Central Illinois has a rich legacy of producing principled public servants who have risen to national prominence and have had a profound impact on our country and our world.

served the Peoria area in Congress before helping end the scourge of slavery, thus becoming our most revered president.

President Ronald Reagan, provided the stalwart leadership that ended the Cold War without a shot being fired.

was a strong advocate for farmers and raising the minimum wage, and was instrumental in the re-election of President Harry Truman in 1948.

played a pivotal role in securing the support of 27 out of 33 Republican senators to pass the landmark 1964 Civil Rights Act. In Dirken’s impassioned speech, he stated, “I trust that the time will never come in my political career when the waters

of partisanship will flow so deep as to obscure my estimate of the national interest.”

Then-U.S. Rep. Bob Michel speaks with Speaker of the House “Tip” O’Neil and President Ronald Reagan. From the collections of The Dirksen Congressional Center.

All of these national leaders with strong ties to the Peoria area share similar values. They treated colleagues from both

led congressional efforts at promoting civility, and because of his fair-handed demeanor, chaired the House of Representatives during proceedings on contentious issues. President Barack Obama appointed him the 16th U.S. Secretary of Transportation, making him the first Bradley alumnus to hold a Cabinet position.

political parties with mutual respect, they were known for their integrity and they placed the best interests of our country above partisan politics. For centuries, principled leadership has played well in the Peoria area, and this legacy of leadership can play well nationally and serve as the model for future generations.

Congresswoman Robin Kelly ’77 represents the citizens of Illinois’ 2nd Congressional District and has worked hard to expand economic opportunity and promote public safety. Previously, she served in the Illinois legislature, was Chief of Staff to the Illinois State Treasurer and was Director of Minority Student Services at Bradley University. In speaking at the December 2014

For 57 years and counting, a Bradley University Bradley commencement ceremony, she encouraged graduates to be engaged citizens: “I’m enlisting you in the fight for the future of our country … even if your life does not lead to politics, be involved … get engaged in the ongoing debate about the direction of the country.”

alum has represented our nation in the U.S. Congress.

Curriculum &amp; Scholarships Education Scholarships Funded by The Dirksen Congressional Center and sponsored by the Institute, every year the Ray and Kathy LaHood Scholarships for the Study of American Government are awarded to selected Bradley students who are entering their senior year, studying U.S. government and have at least a 3.5 grade point average in their major. Curriculum The Institute teaches classes under the Leadership Studies Minor, which gives students the opportunity to learn about leadership and directly apply theories and practice to their major studies of discipline. Former U.S. Secretary of Transportation Ray LaHood guest lectures to a political science class.

Specifically, the Institute has developed courses on ethical leadership, collaborative leadership, bipartisan leadership, servant leadership and advocacy. Notable federal, state and local public service leaders guest lecture in these classes. The Leadership Studies Minor has a large number of students from all five colleges across campus

taking courses and developing their leadership skills. The Minor is a collaboration between the College of Education and Health Sciences’ Department of Leadership in Education, Nonprofits and Counseling, the Division of Student Affairs and the Institute.

“The Institute gave me great real-world experiences. The public policy symposiums on current issues and the interaction with public service leaders on the national, state and local levels were fantastic.” — Joshua Cox ’09

Bradley students and faculty at the Midwest Energy Solutions Symposium.

The Institute invites national, state and regional public service speakers to Bradley’s campus for the benefit of students and the community. Former U.S. House Minority Leader Bob Michel ’48 HON ’81 kicked off the speakers program, sharing the principles in leadership that guided him during his distinguished 38-year career in Congress. In 2008, the Institute began the tradition of inviting outstanding women in leadership to honor the

legacy of the University’s founder Lydia Moss Bradley. Top women leaders in business, government and the law have spoken, including Hon. Rita Garman, Chief Justice of the Illinois Supreme Court; Tana Utley ‘86, a chief technology officer for Caterpillar Inc.; and Rep. Cheri Bustos, 17th Congressional District of Illinois. The Institute strives to bring relevant and interesting speakers to the Hilltop.

“ In the Civil Rights movement, we were taught to wear peace, to wear love, to wear non-violence, to find a way to respect every human being, to love every human being.” “There must be something very special about Bradley University (referring to Bob Michel, Ray LaHood and Robin Kelly being alumni), and we must prepare the next generation of leaders.” — U.S. Rep. John Lewis, speaking at the Civil Rights Act Anniversary Celebration

Bradley students had an opportunity to meet and ask questions of former U.S. Supreme Court Justice Sandra Day O’Connor before she spoke at an event held by Chief Federal Judge James Shadid ’79.

“Bradley’s leadership institute is helping to bring experts from across the country to discuss important issues like health care reform, energy solutions, transportation needs and how we can save and protect the Illinois River.” — Ill. Sen. Dave Koehler

Rep. Cheri Bustos speaks at the Women in Leadership luncheon.

Bradley students are helped with voter registration by members of the League of Women Voters.

Brad McMillan, executive director of the Institute, speaks at a redistricting press conference in front of a truck containing 500,000 petition signatures to be delivered to the State Board of Elections in Springfield, Illinois.

The Institute seeks to be a leader among universities for student involvement in the democratic process. This participation includes civic education, registering to vote, volunteering with political campaigns, interning in state and federal legislative offices, having notable public service leaders speak on campus and leading an effort to get petition signatures for the process used in drawing legislative districts. The Institute has served as a statewide leader on redistricting reform and is considered an excellent resource for ethical leadership in public service at all levels of government.

“I am delighted that my alma mater Bradley University and The Dirksen Congressional Center are joining forces to launch the Institute.e Institute can inspire a new generation of leaders to use a bipartisan and collaborative approach to resolving our toughest issues. We desperately need a return to civility, statesmanship and integrity at all levels of government. Public service can be and should be a noble profession worthy of our best and brightest graduates.” — Former U.S. House Republican Leader Bob Michel

About the Director Brad McMillan was named as the inaugural executive director of the Institute for Principled Leadership. For nearly a decade, McMillan served as U.S. Rep. Ray LaHood’s district chief of staff. Prior to his government career, McMillan practiced law for 10 years, including serving as a senior staff attorney for the Illinois Supreme Court and Illinois Appellate Court (3rd District). He has a juris doctor degree from Southern Illinois School of Law and a Bachelor of Arts degree in political science from Illinois Wesleyan University. Then-Gov. Pat Quinn appointed McMillan to the Illinois Reform Commission. Brad McMillan watches Bob Michel make a point at the Institute’s first public forum held on Bradley’s campus.