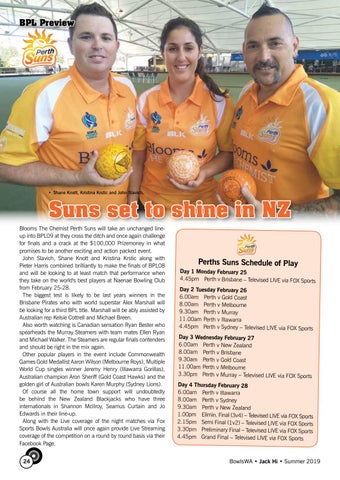 Suns set to shine in NZ Blooms The Chemist Perth Suns will take an unchanged lineup into BPL09 at they cross the ditch and once again challenge for finals and a crack at the $100,000 Prizemoney in what promises to be another exciting and action packed event. John Slavich, Shane Knott and Kristina Krstic along with Pieter Harris combined brilliantly to make the finals of BPL08 and will be looking to at least match that performance when they take on the world&#39;s best players at Naenae Bowling Club from February 25-28. The biggest test is likely to be last years winners in the Brisbane Pirates who with world superstar Alex Marshall will be looking for a third BPL title. Marshall will be ably assisted by Australian rep Kelsie Cottrell and Michael Breen. Also worth watching is Canadian sensation Ryan Bester who spearheads the Murray Steamers with team mates Ellen Ryan and Michael Walker. The Steamers are regular finals contenders and should be right in the mix again. Other popular players in the event include Commonwealth Games Gold Medallist Aaron Wilson (Melbourne Roys), Multiple World Cup singles winner Jeremy Henry (Illawarra Gorillas), Australian champion Aron Sheriff (Gold Coast Hawks) and the golden girl of Australian bowls Karen Murphy (Sydney Lions). Of course all the home town support will undoubtedly be behind the New Zealand Blackjacks who have three internationals in Shannon McIlroy, Seamus Curtain and Jo Edwards in their line-up. Along with the Live coverage of the night matches via Fox Sports Bowls Australia will once again provide Live Streaming coverage of the competition on a round by round basis via their Facebook Page. 24 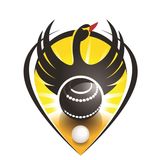