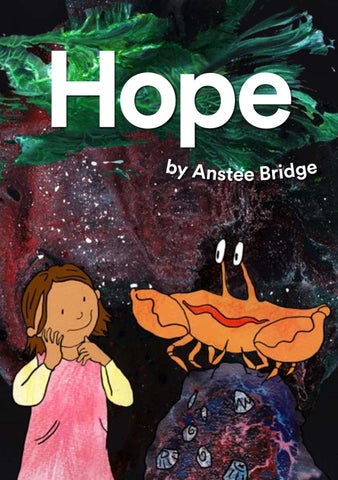 Foreword I’m so impressed with the Anstee Bridge project, and the way the staff and young people work together imaginatively and constructively to face and conquer the challenges they experience. This must have been particularly helpful during the strange life changes caused by Covid. That’s when the idea for this story began. I think this beautiful picture book HOPE is a wonderful achievement. It explains in simple but poetic terms feelings of despair and loneliness, but gradually the frightened child is soothed and comforted. She learns how to make friends, to have confidence in herself, to jettison her worries, and go bravely on her way. It’s told so sensitively that a small child could absorb it as an adventure book, whilst a young person would understand the metaphors and see the message. It’s a work that’s true to its title, and a marvellous achievement. Dame Jacqueline Wilson

Everywhere Hope went, the rain came. It turned the world around her grey until she felt like she had turned grey too.

One day on the way home from school, there was so much rain, she couldn’t see where she was going.  The sight of the road home began to disappear from her eyes and Hope was swept up in the water.

Whooossshhhiinnngggg past everything she had ever known. Until she found herself all alone.   She was falling through the ocean.

Hope thought her heart would burst in fright.  These hands could squish her right up. “Help,” was all she could manage to whisper. Carefully, the hands shook her dry. “You didn’t eat me.” “SSSSSSsssshhhhhhhhh.”

Hope curled up in the giant hands, trying not to quiver in fright.  They carried her so gently over the water, taming the wild waves until the grey dissolved into a clear, blue sea.

Blinking into the light, Hope could see colour again.  Day turned to night and she fell asleep on the waves.

When Hope woke up, she found she was floating in a shell  with a blanket of seaweed keeping her warm.  She was all alone on the sea.

She noticed a bag beside her.  It was full of her favourite foods. She began to eat and eat and the more she ate, the quieter the strange noises were.

With food and sleep, Hope began to feel calm.  “How do I get out of here?”, she wondered.  All of a sudden, her shell bumped into a rock.

“Oi!” shouted a crab. He seemed too tiny to have such a loud voice:  “I’m sorry,” said Hope.  She climbed up onto the rock to check the crab was ok.

The crab nodded to his rock.  He had been painting it beautiful colours.  When the shell hit the rock, it turned the painting into a blob.

“I’m so sorry. I’ve ruined your rock.”  “Calm down, you haven’t,” replied the crab. With a few quick strokes from the brush in his claw, the blob became a pot of gold with butterflies and flowers spilling out.

“Wow! That’s beautiful.” “Thank you. You know, I like it more than my original plan. Everything happens for a reason.” They stared at it for a while.

“Colour the flowers in,” snapped the crab. “I should be able to colour but I’m not very good,” whispered Hope.

The crab held up a pencil in one claw. His other claw was snapping clickety-clack with the excitement. She decided having a go was better than a nipped bottom. She was a little nervous. Then she felt the warm sun on her face, the sound of the calm waves. She breathed in deeply and began to colour.

“It’s beautiful!”  Hope looked down in surprise. It really was beautiful.  “Stop should-ing yourself. You are perfect just as you are,” said the crab.

Hope began to cry.  “I just don’t feel perfect. I’m lost and alone.”  The crab snapped his pincers, clickety-clack, for her to sit down.

Hope sat down on the rock, next to the crab.  They stared out across the water.  “How does it feel to be lost?” asked the crab.

Hope paused. She was a little afraid to answer. No one had ever asked her before.  “It’s grey,” she whispered, “everything is grey and sometimes I don’t know which way to go.”

They stared out to the water again.  “What do you see?” asked the crab again. Hope looked out.

She noted the warm yellow sun, the silvery threads woven in the rock, and the rainbow fish swimming under the waters. “Colours” she said.  “Then you are no longer lost.”

“I don’t know how to get home.” “Write down your worries,” said the crab. Hope did as the crab asked. “Now put them down. Sometimes our worries take over and we can’t see the way forward.”

With that the crab gave her a cuddle, gave her his crayons, and dived into the water. Hope called after him, “Can’t you come with me?”

“You don’t need me, Hope. You are full of magic!” “Wait. What? How did you know my name?!” As she sat on the rock, she realised she was so used to worrying, she had forgotten to think about anything else.

When she looked at it, she felt a warm glow in her heart.  The waves parted and the giant eyes were staring back at her.

She hopped into his hands, set down her bag, and they set sail.

Hope realised she’d brought her worries with her. As she looked down at them, she realised it was now or never.  She began to drop her worries into the water.

As she let them go, the waves calmed, and the water became clearer.  The hands stopped.

“You can take it from here.”  And she did.  One step at a time.

A Note on Hope Hope is a collaboration between the young people of Anstee Bridge and a group of artists. Students were invited to bring the words of a picture book to life - through discussion, painting, doodling and audio recordings. The result is a celebration of language in all forms. Our students followed their instincts. Some designed intricate art pieces. Others painted paper for houses and some turned the words into an audio story for others to listen to. The result is a picture book where the story is in the pictures as much as the words. So, when you don’t have the words for your feelings, remember you can paint them, draw them, dance them out, doodle them and so much more. Find your own way that helps you - just like Hope did. Anstee Bridge 2021 With thanks to Eliza Wilmott, Harriet Ditmore and Collagism for supporting our workshops. Hope has been made possible thanks to

Hope’s world has turned grey. It rains so much it sweeps her up into the ocean. There she finds sea creatures with blankets of seaweed, paintbrushes, and wise words. Overnight, Hope learns the importance of being kind to herself and letting go of her worries.

Hope’s world has turned grey. It rains so much it sweeps her up into the ocean. There she finds sea creatures with blankets of seaweed, paintbrushes, and wise words. Overnight, Hope learns the importance of being kind to herself and letting go of her worries. Hope was made with Anstee Bridge students. Anstee Bridge is an alternative education programme for young people with emotional health needs preventing their engagement in educaiton. 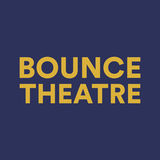