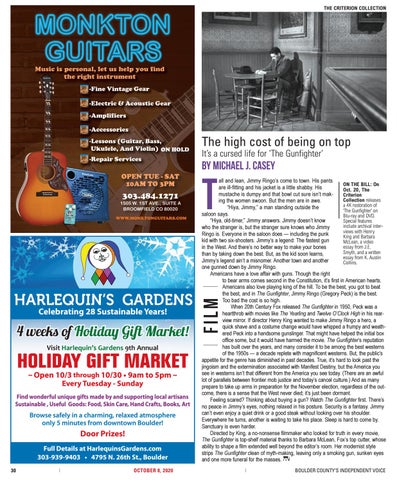 Browse safely in a charming, relaxed atmosphere only 5 minutes from downtown Boulder!

all and lean, Jimmy Ringo’s come to town. His pants ON THE BILL: On are ill-fitting and his jacket is a little shabby. His Oct. 20, The mustache is dumpy and that bowl cut sure isn’t makCriterion Collection releases ing the women swoon. But the men are in awe. a 4K restoration of “Hiya, Jimmy,” a man standing outside the ‘The Gunfighter’ on saloon says. Blu-ray and DVD. “Hiya, old-timer,” Jimmy answers. Jimmy doesn’t know Special features include archival interwho the stranger is, but the stranger sure knows who Jimmy views with Henry Ringo is. Everyone in the saloon does — including the punk King and Barbara kid with two six-shooters. Jimmy’s a legend: The fastest gun McLean, a video essay from J.E. in the West. And there’s no better way to make your bones Smyth, and a written than by taking down the best. But, as the kid soon learns, essay from K. Austin Jimmy’s legend ain’t a misnomer. Another town and another Collins. one gunned down by Jimmy Ringo. Americans have a love affair with guns. Though the right to bear arms comes second in the Constitution, it’s first in American hearts. Americans also love playing king of the hill. To be the best, you got to beat the best, and in The Gunfighter, Jimmy Ringo (Gregory Peck) is the best. Too bad the cost is so high. When 20th Century Fox released The Gunfighter in 1950, Peck was a heartthrob with movies like The Yearling and Twelve O’Clock High in his rearview mirror. If director Henry King wanted to make Jimmy Ringo a hero, a quick shave and a costume change would have whipped a frumpy and weathered Peck into a handsome gunslinger. That might have helped the initial box office some, but it would have harmed the movie. The Gunfighter’s reputation has built over the years, and many consider it to be among the best westerns of the 1950s — a decade replete with magnificent westerns. But, the public’s appetite for the genre has diminished in past decades. True, it’s hard to look past the jingoism and the extermination associated with Manifest Destiny, but the America you see in westerns isn’t that different from the America you see today. (There are an awful lot of parallels between frontier mob justice and today’s cancel culture.) And as many prepare to take up arms in preparation for the November election, regardless of the outcome, there is a sense that the West never died; it’s just been dormant. Feeling scared? Thinking about buying a gun? Watch The Gunfighter first. There’s no peace in Jimmy’s eyes, nothing relaxed in his posture. Security is a fantasy. Jimmy can’t even enjoy a quiet drink or a good steak without looking over his shoulder. Everywhere he turns, another is waiting to take his place. Sleep is hard to come by. Sanctuary is even harder. Directed by King, a no-nonsense filmmaker who looked for truth in every movie, The Gunfighter is top-shelf material thanks to Barbara McLean, Fox’s top cutter, whose ability to shape a film extended well beyond the editor’s room. Her modernist style strips The Gunfighter clean of myth-making, leaving only a smoking gun, sunken eyes and one more funeral for the masses. I