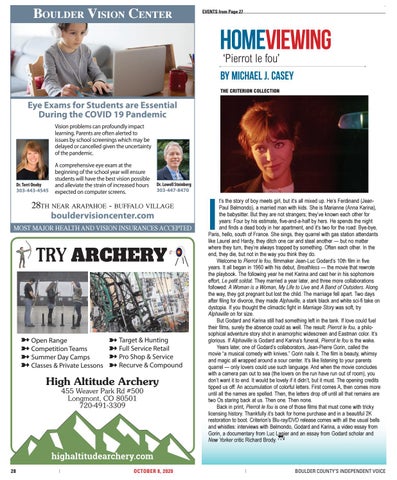 Eye Exams for Students are Essential During the COVID 19 Pandemic Vision problems can profoundly impact learning. Parents are often alerted to issues by school screenings which may be delayed or cancelled given the uncertainty of the pandemic.

A comprehensive eye exam at the beginning of the school year will ensure students will have the best vision possible and alleviate the strain of increased hours expected on computer screens.

t’s the story of boy meets girl, but it’s all mixed up. He’s Ferdinand (JeanPaul Belmondo), a married man with kids. She is Marianne (Anna Karina), the babysitter. But they are not strangers; they’ve known each other for years: Four by his estimate, five-and-a-half by hers. He spends the night and finds a dead body in her apartment, and it’s two for the road: Bye-bye, Paris, hello, south of France. She sings, they quarrel with gas station attendants like Laurel and Hardy, they ditch one car and steal another — but no matter where they turn, they’re always trapped by something. Often each other. In the end, they die, but not in the way you think they do. Welcome to Pierrot le fou, filmmaker Jean-Luc Godard’s 10th film in five years. It all began in 1960 with his debut, Breathless — the movie that rewrote the playbook. The following year he met Karina and cast her in his sophomore effort, Le petit soldat. They married a year later, and three more collaborations followed: A Woman is a Woman, My Life to Live and A Band of Outsiders. Along the way, they got pregnant but lost the child. The marriage fell apart. Two days after filing for divorce, they made Alphaville, a stark black and white sci-fi take on dystopia. If you thought the climactic fight in Marriage Story was soft, try Alphaville on for size. But Godard and Karina still had something left in the tank. If love could fuel their films, surely the absence could as well. The result: Pierrot le fou, a philosophical adventure story shot in anamorphic widescreen and Eastman color. It’s glorious. If Alphaville is Godard and Karina’s funeral, Pierrot le fou is the wake. Years later, one of Godard’s collaborators, Jean-Pierre Gorin, called the movie “a musical comedy with knives.” Gorin nails it. The film is beauty, whimsy and magic all wrapped around a sour center. It’s like listening to your parents quarrel — only lovers could use such language. And when the movie concludes with a camera pan out to sea (the lovers on the run have run out of room), you don’t want it to end. It would be lovely if it didn’t, but it must. The opening credits tipped us off: An accumulation of colorful letters. First comes A, then comes more until all the names are spelled. Then, the letters drop off until all that remains are two Os staring back at us. Then one. Then none. Back in print, Pierrot le fou is one of those films that must come with tricky licensing history. Thankfully it’s back for home purchase and in a beautiful 2K restoration to boot. Criterion’s Blu-ray/DVD release comes with all the usual bells and whistles: interviews with Belmondo, Godard and Karina, a video essay from Gorin, a documentary from Luc Lagier and an essay from Godard scholar and New Yorker critic Richard Brody.