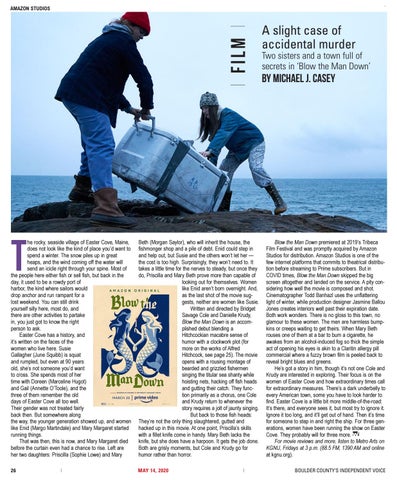 A slight case of accidental murder

he rocky, seaside village of Easter Cove, Maine, does not look like the kind of place you’d want to spend a winter. The snow piles up in great heaps, and the wind coming off the water will send an icicle right through your spine. Most of the people here either fish or sell fish, but back in the day, it used to be a rowdy port of harbor, the kind where sailors would drop anchor and run rampant for a lost weekend. You can still drink yourself silly here, most do, and there are other activities to partake in, you just got to know the right person to ask. Easter Cove has a history, and it’s written on the faces of the women who live here. Susie Gallagher (June Squibb) is squat and rumpled, but even at 90 years old, she’s not someone you’d want to cross. She spends most of her time with Doreen (Marceline Hugot) and Gail (Annette O’Toole), and the three of them remember the old days of Easter Cove all too well. Their gender was not treated fairly back then. But somewhere along the way, the younger generation showed up, and women like Enid (Margo Martindale) and Mary Margaret started running things. That was then, this is now, and Mary Margaret died before the curtain even had a chance to rise. Left are her two daughters: Priscilla (Sophie Lowe) and Mary 26

Beth (Morgan Saylor), who will inherit the house, the fishmonger shop and a pile of debt. Enid could step in and help out, but Susie and the others won’t let her — the cost is too high. Surprisingly, they won’t need to. It takes a little time for the nerves to steady, but once they do, Priscilla and Mary Beth prove more than capable of looking out for themselves. Women like Enid aren’t born overnight. And, as the last shot of the movie suggests, neither are women like Susie. Written and directed by Bridget Savage Cole and Danielle Krudy, Blow the Man Down is an accomplished debut blending a Hitchcockian macabre sense of humor with a clockwork plot (for more on the works of Alfred Hitchcock, see page 25). The movie opens with a rousing montage of bearded and grizzled fishermen singing the titular sea shanty while hoisting nets, hacking off fish heads and gutting their catch. They function primarily as a chorus, one Cole and Krudy return to whenever the story requires a jolt of jaunty singing. But back to those fish heads: They’re not the only thing slaughtered, gutted and hacked up in this movie. At one point, Priscilla’s skills with a fillet knife come in handy. Mary Beth lacks the knife, but she does have a harpoon. It gets the job done. Both are grisly moments, but Cole and Krudy go for humor rather than horror. MAY 14, 2020

Blow the Man Down premiered at 2019’s Tribeca Film Festival and was promptly acquired by Amazon Studios for distribution. Amazon Studios is one of the few internet platforms that commits to theatrical distribution before streaming to Prime subscribers. But in COVID times, Blow the Man Down skipped the big screen altogether and landed on the service. A pity considering how well the movie is composed and shot. Cinematographer Todd Banhazl uses the unflattering light of winter, while production designer Jasmine Ballou Jones creates interiors well past their expiration date. Both work wonders. There is no gloss to this town, no glamour to these women. The men are harmless bumpkins or creeps waiting to get theirs. When Mary Beth rouses one of them at a bar to bum a cigarette, he awakes from an alcohol-induced fog so thick the simple act of opening his eyes is akin to a Claritin allergy pill commercial where a fuzzy brown film is peeled back to reveal bright blues and greens. He’s got a story in him, though it’s not one Cole and Krudy are interested in exploring. Their focus is on the women of Easter Cove and how extraordinary times call for extraordinary measures. There’s a dark underbelly to every American town, some you have to look harder to find. Easter Cove is a little bit more middle-of-the-road: It’s there, and everyone sees it, but most try to ignore it. Ignore it too long, and it’ll get out of hand. Then it’s time for someone to step in and right the ship. For three generations, women have been running the show on Easter Cove. They probably will for three more. For movie reviews and more, listen to Metro Arts on KGNU, Fridays at 3 p.m. (88.5 FM, 1390 AM and online at kgnu.org). BOULDER COUNTY’S INDEPENDENT VOICE