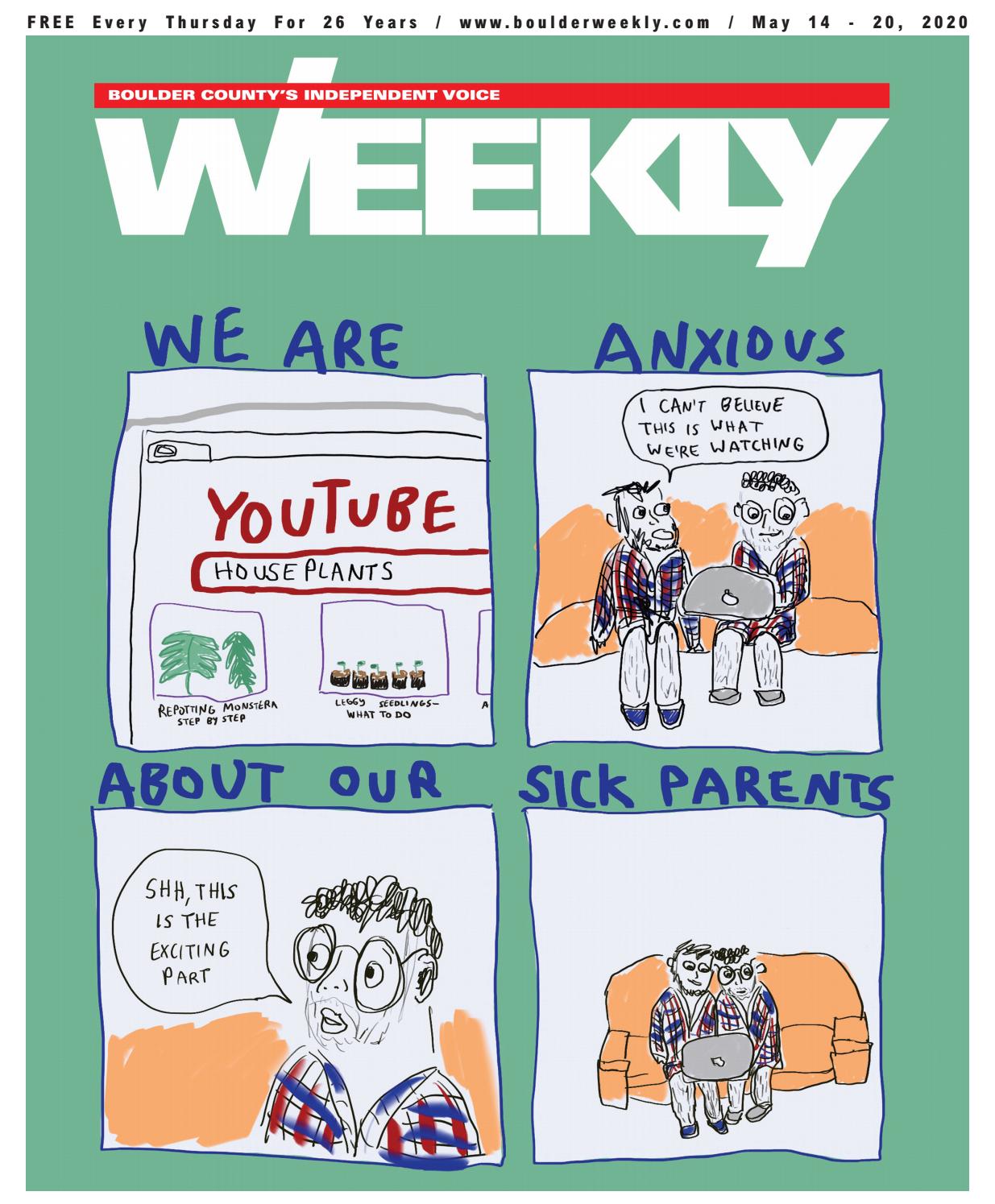 Around 7 p.m. on the evening of Sept. 12, 2013, Marki LeCompte left her mother’s apartment at the Frasier retirement community, driving the block and a half home through water up to the running boards on her Subaru. By the time she went back to her mom’s the next morning at 8 a.m., “The west half of the Frasier retirement community looked like a war zone,” she says, mud reaching up to LaCompte’s shins.

Although her own house was protected from flooding by a sump pump, LeCompte says the flooding was incredibly traumatic for her mother and others at Frasier, many of whom lost most of their personal effects and family heirlooms. At 93, her mother moved in with her, despite the fact that LeCompte’s house was not wheelchair accessible. After the flood, LeCompte says her mom’s health deteriorated fast as she slipped into dementia. She passed away in 2015. 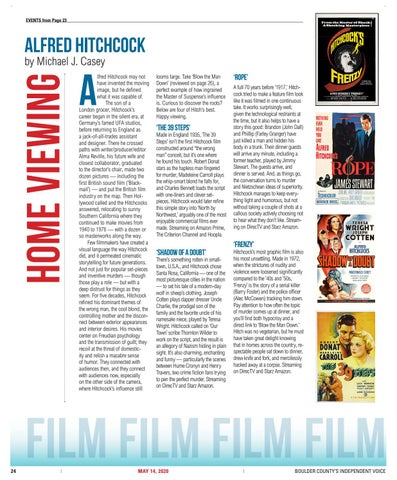 lfred Hitchcock may not have invented the moving image, but he defined what it was capable of. The son of a London grocer, Hitchcock’s career began in the silent era, at Germany’s famed UFA studios, before returning to England as a jack-of-all-trades assistant and designer. There he crossed paths with writer/producer/editor Alma Reville, his future wife and closest collaborator, graduated to the director’s chair, made two dozen pictures — including the first British sound film (‘Blackmail’) — and put the British film industry on the map. Then Hollywood called and the Hitchcocks answered, relocating to sunny Southern California where they continued to make movies from 1940 to 1976 — with a dozen or so masterworks along the way. Few filmmakers have created a visual language the way Hitchcock did, and it permeated cinematic storytelling for future generations. And not just for popular set-pieces and inventive murders — though those play a role — but with a deep distrust for things as they seem. For five decades, Hitchcock refined his dominant themes of the wrong man, the cool blond, the controlling mother and the disconnect between exterior appearances and interior desires. His movies center on Freudian psychology and the transmission of guilt; they recoil at the threat of domesticity and relish a macabre sense of humor. They connected with audiences then, and they connect with audiences now, especially on the other side of the camera, where Hitchcock’s influence still

looms large. Take ‘Blow the Man Down’ (reviewed on page 26), a perfect example of how ingrained the Master of Suspense’s influence is. Curious to discover the roots? Below are four of Hitch’s best. Happy viewing.

Made in England 1935, ‘The 39 Steps’ isn’t the first Hitchcock film constructed around “the wrong man” conceit, but it’s one where he found his touch. Robert Donat stars as the hapless man fingered for murder, Madeleine Carroll plays the whip-smart blond he falls for, and Charles Bennett loads the script with one-liners and clever setpieces. Hitchcock would later refine this simple story into ‘North by Northwest,’ arguably one of the most enjoyable commercial films ever made. Streaming on Amazon Prime, The Criterion Channel and Hoopla.

‘SHADOW OF A DOUBT’

There’s something rotten in smalltown, U.S.A., and Hitchcock chose Santa Rosa, California — one of the most picturesque cities in the nation — to set his tale of a modern-day wolf in sheep’s clothing. Joseph Cotten plays dapper dresser Uncle Charlie, the prodigal son of the family and the favorite uncle of his namesake niece, played by Teresa Wright. Hitchcock called on ‘Our Town’ scribe Thornton Wilder to work on the script, and the result is an allegory of Nazism hiding in plain sight. It’s also charming, enchanting and funny — particularly the scenes between Hume Cronyn and Henry Travers, two crime fiction fans trying to pen the perfect murder. Streaming on DirecTV and Starz Amazon.

‘ROPE’ A full 70 years before ‘1917,’ Hitchcock tried to make a feature film look like it was filmed in one continuous take. It works surprisingly well, given the technological restraints at the time, but it also helps to have a story this good: Brandon (John Dall) and Phillip (Farley Granger) have just killed a man and hidden his body in a trunk. Their dinner guests will arrive any minute, including a former teacher, played by Jimmy Stewart. The guests arrive, and dinner is served. And, as things go, the conversation turns to murder and Nietzschean ideas of superiority. Hitchcock manages to keep everything light and humorous, but not without taking a couple of shots at a callous society actively choosing not to hear what they don’t like. Streaming on DirecTV and Starz Amazon.

Hitchcock’s most graphic film is also his most unsettling. Made in 1972, when the strictures of nudity and violence were loosened significantly compared to the ’40s and ’50s, ‘Frenzy’ is the story of a serial killer (Barry Foster) and the police officer (Alec McCowen) tracking him down. Pay attention to how often the topic of murder comes up at dinner, and you’ll find both hypocrisy and a direct link to ‘Blow the Man Down.’ Hitch was no vegetarian, but he must have taken great delight knowing that in homes across the country, respectable people sat down to dinner, drew knife and fork, and mercilessly hacked away at a corpse. Streaming on DirecTV and Starz Amazon.

Cover story: we are anxious about our sick parents, letters to the editor, opinions, Savage Love, Cannabis Corner, Real Astrolgoy, What to do when there's nothing to do 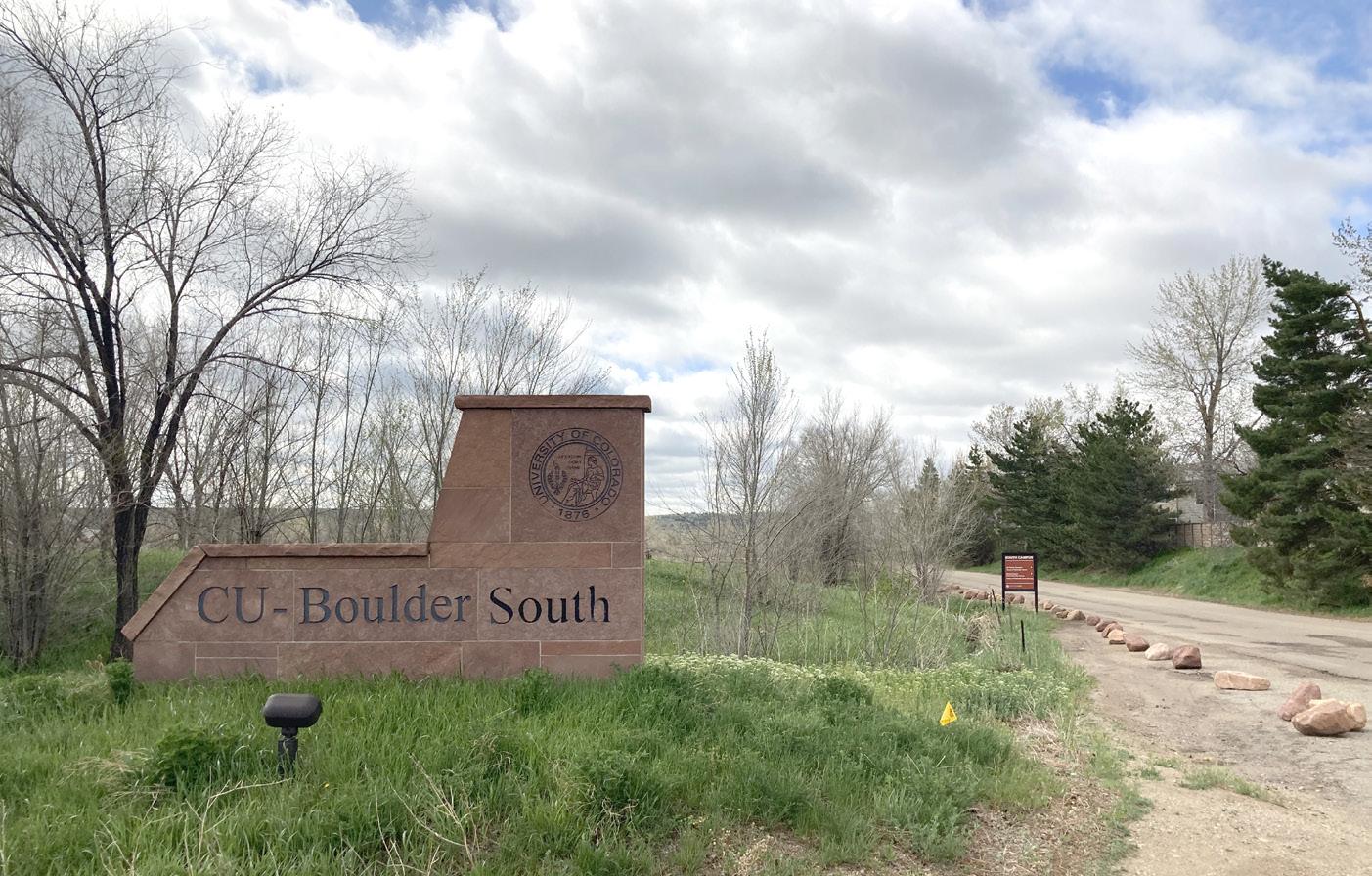 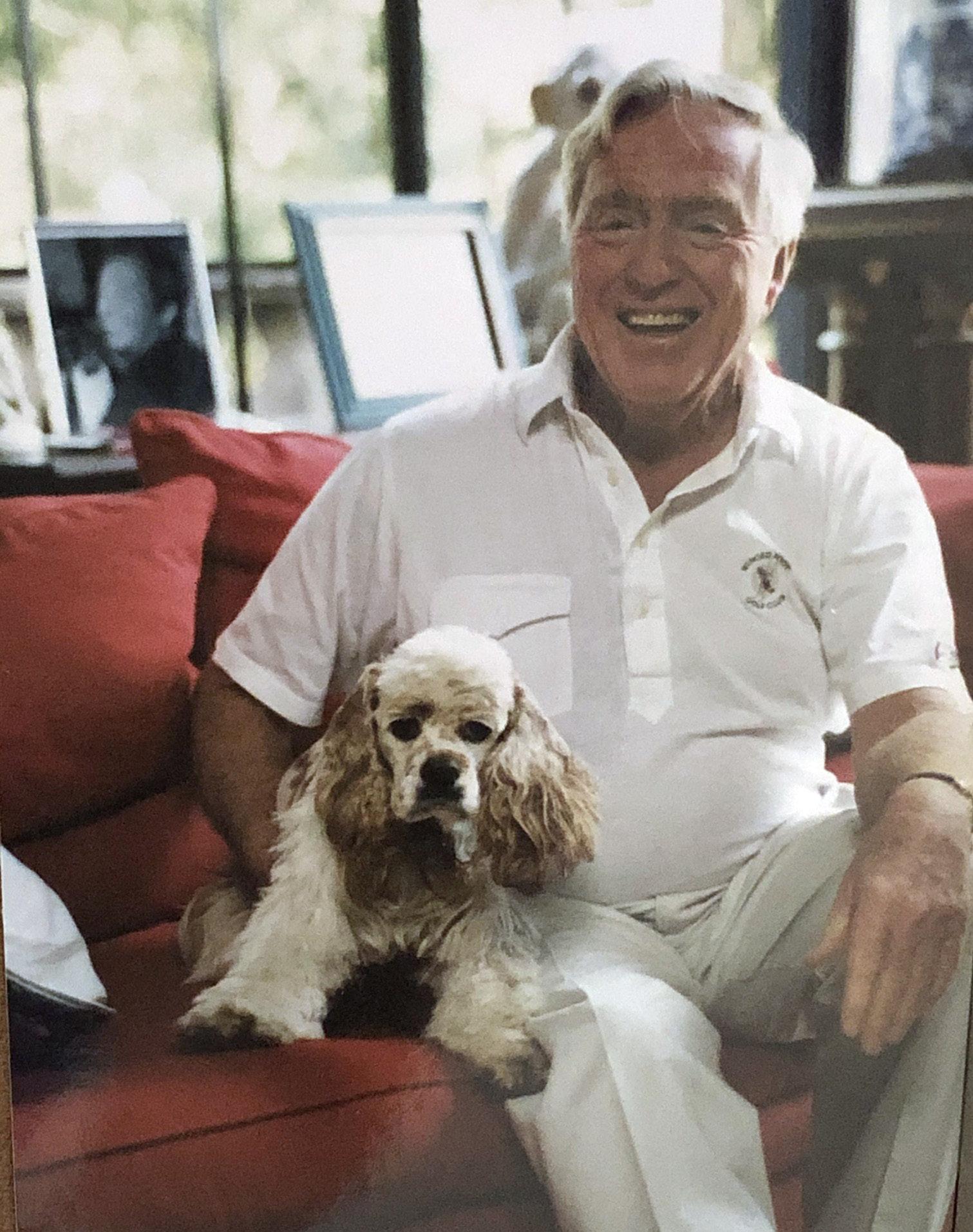 When death becomes an aggregate abstraction, the truth either matters, or it doesn’t by Dave Kirby 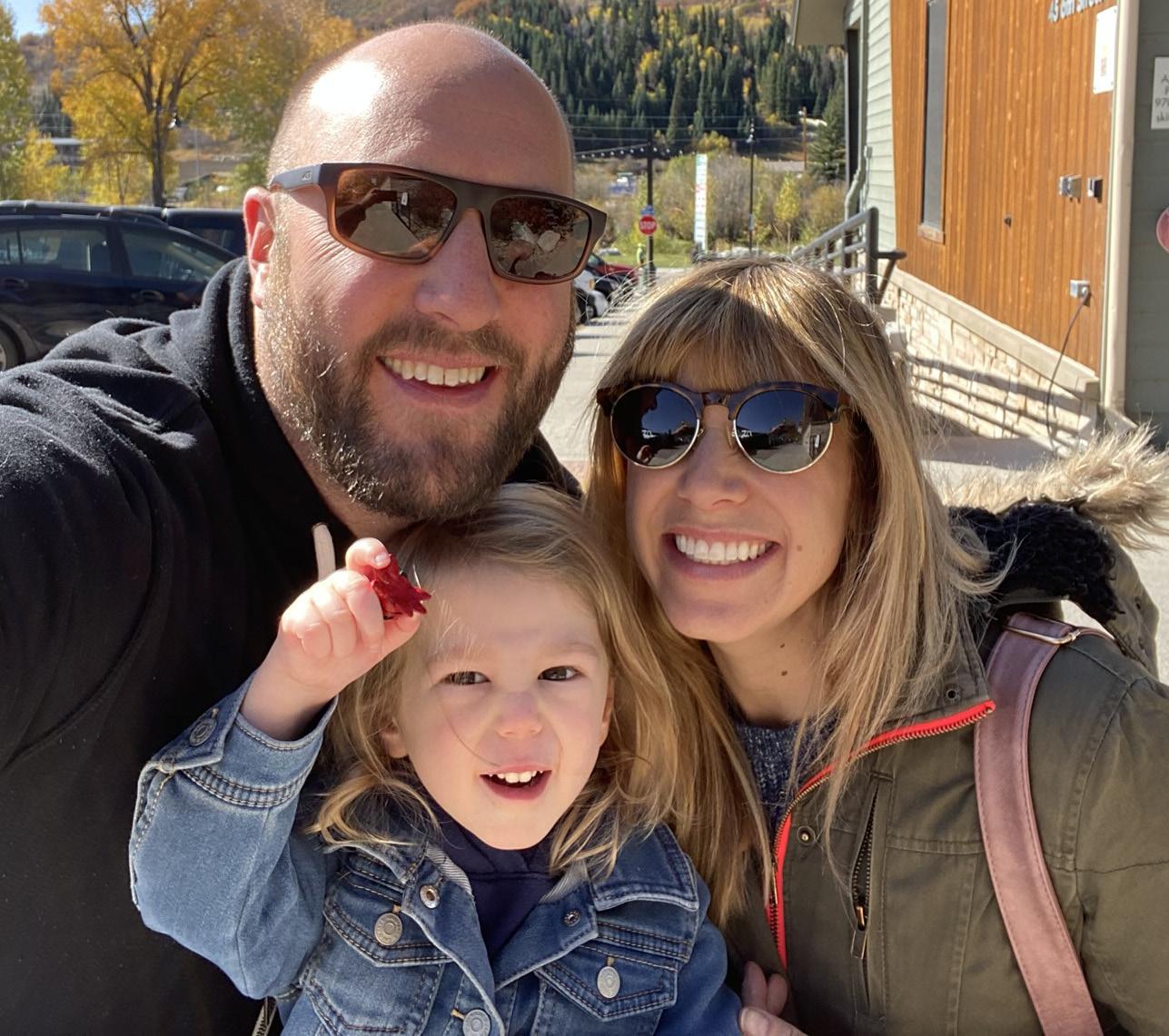 Blackbelly/Santo owners found out their daughter had a rare genetic disease the week COVID-19 closed their restaurants. Now, they need your help. by Matt Cortina 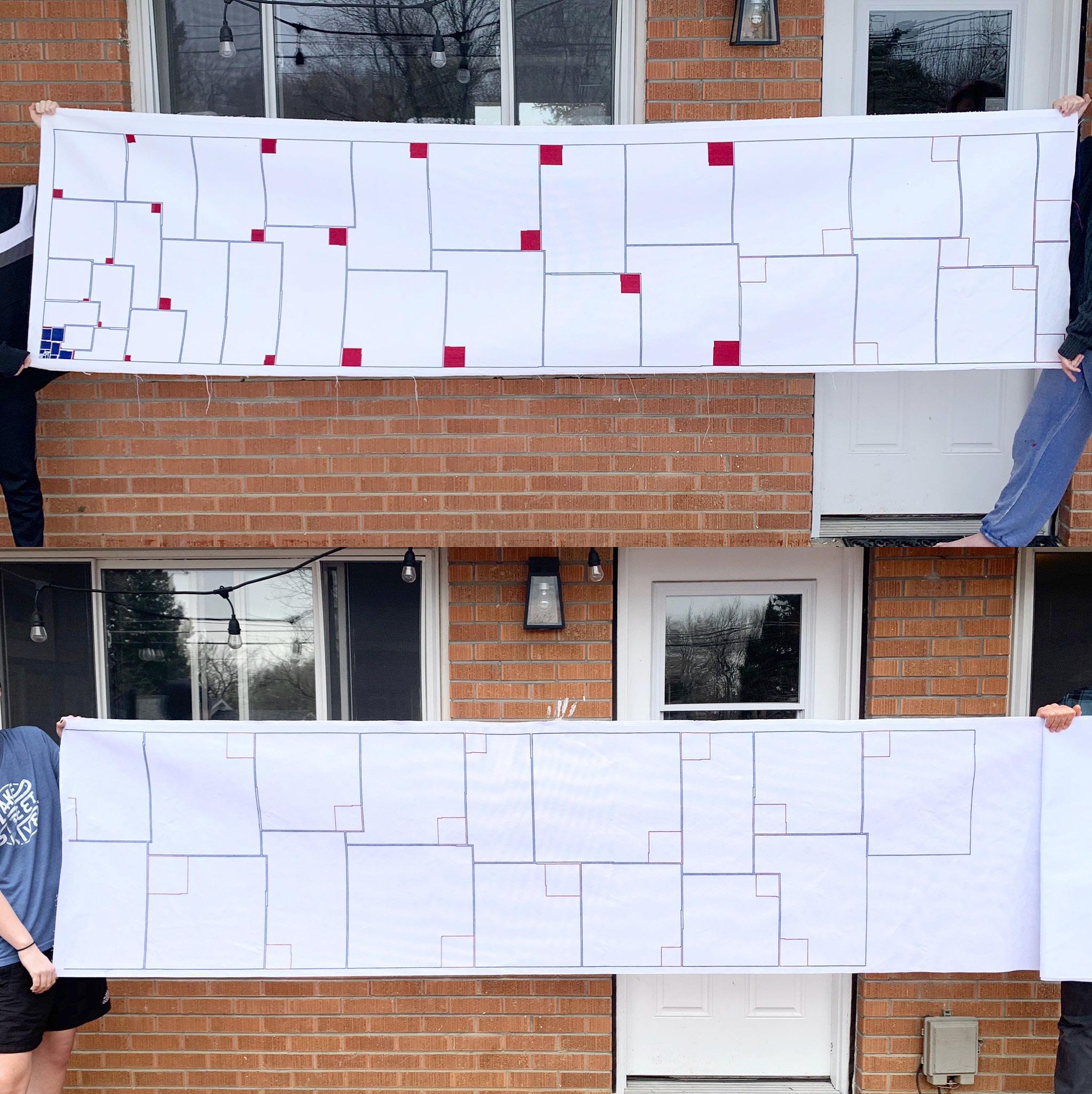 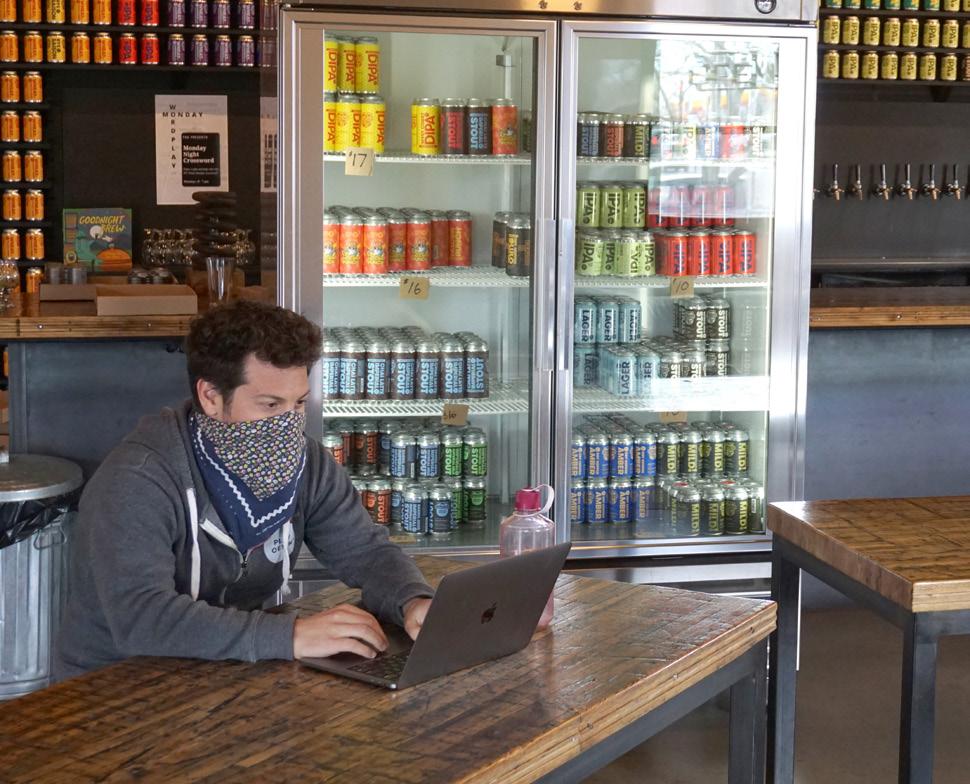 What shape will breweries take in a post-COVID world? by Michael J. Casey