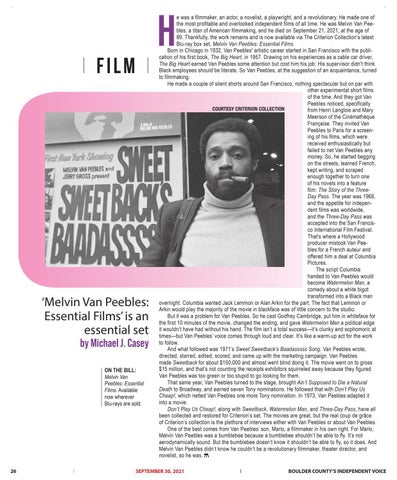 e was a filmmaker, an actor, a novelist, a playwright, and a revolutionary. He made one of the most profitable and overlooked independent films of all time. He was Melvin Van Peebles, a titan of American filmmaking, and he died on September 21, 2021, at the age of 89. Thankfully, the work remains and is now available via The Criterion Collection’s latest Blu-ray box set, Melvin Van Peebles: Essential Films. Born in Chicago in 1932, Van Peebles&#39; artistic career started in San Francisco with the publication of his first book, The Big Heart, in 1957. Drawing on his experiences as a cable car driver, The Big Heart earned Van Peebles some attention but cost him his job: His supervisor didn&#39;t think Black employees should be literate. So Van Peebles, at the suggestion of an acquaintance, turned to filmmaking. He made a couple of silent shorts around San Francisco, nothing spectacular but on par with other experimental short films of the time. And they got Van Peebles noticed, specifically COURTESY CRITERION COLLECTION from Henri Langlois and Mary Meerson of the Cinémathèque Française. They invited Van Peebles to Paris for a screening of his films, which were received enthusiastically but failed to net Van Peebles any money. So, he started begging on the streets, learned French, kept writing, and scraped enough together to turn one of his novels into a feature film: The Story of the ThreeDay Pass. The year was 1968, and the appetite for independent films was worldwide, and the Three-Day Pass was accepted into the San Francisco International Film Festival. That’s where a Hollywood producer mistook Van Peebles for a French auteur and offered him a deal at Columbia Pictures. The script Columbia handed to Van Peebles would become Watermelon Man, a comedy about a white bigot transformed into a Black man overnight. Columbia wanted Jack Lemmon or Alan Arkin for the part. The fact that Lemmon or Arkin would play the majority of the movie in blackface was of little concern to the studio. But it was a problem for Van Peebles. So he cast Godfrey Cambridge, put him in whiteface for the first 10 minutes of the movie, changed the ending, and gave Watermelon Man a political edge it wouldn’t have had without his hand. The film isn’t a total success—it’s clunky and sophomoric at times—but Van Peebles’ voice comes through loud and clear. It’s like a warm-up act for the work to follow. And what followed was 1971’s Sweet Sweetback’s Baadasssss Song. Van Peebles wrote, directed, starred, edited, scored, and came up with the marketing campaign. Van Peebles made Sweetback for about $150,000 and almost went blind doing it. The movie went on to gross $15 million, and that’s not counting the receipts exhibitors squirreled away because they figured Van Peebles was too green or too stupid to go looking for them. That same year, Van Peebles turned to the stage, brought Ain’t Supposed to Die a Natural Death to Broadway, and earned seven Tony nominations. He followed that with Don’t Play Us Cheap!, which netted Van Peebles one more Tony nomination. In 1973, Van Peebles adapted it into a movie. Don’t Play Us Cheap!, along with Sweetback, Watermelon Man, and Three-Day Pass, have all been collected and restored for Criterion’s set. The movies are great, but the real coup de grâce of Criterion’s collection is the plethora of interviews either with Van Peebles or about Van Peebles. One of the best comes from Van Peebles’ son, Mario, a filmmaker in his own right. For Mario, Melvin Van Peebles was a bumblebee because a bumblebee shouldn’t be able to fly. It’s not aerodynamically sound. But the bumblebee doesn’t know it shouldn’t be able to fly, so it does. And Melvin Van Peebles didn’t know he couldn’t be a revolutionary filmmaker, theater director, and novelist, so he was.