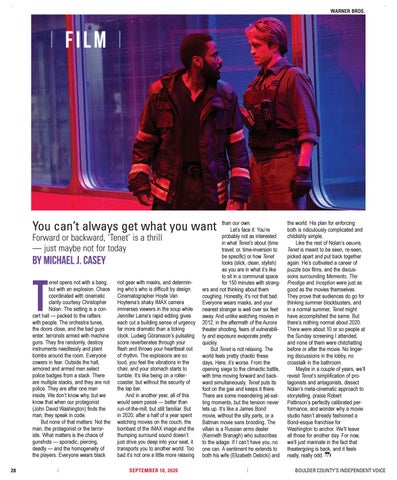 You can’t always get what you want Forward or backward, ‘Tenet’ is a thrill — just maybe not for today

enet opens not with a bang, but with an explosion. Chaos coordinated with cinematic clarity courtesy Christopher Nolan. The setting is a concert hall — packed to the rafters with people. The orchestra tunes, the doors close, and the bad guys enter: terrorists armed with machine guns. They fire randomly, destroy instruments needlessly and plant bombs around the room. Everyone cowers in fear. Outside the hall, armored and armed men select police badges from a stack. There are multiple stacks, and they are not police. They are after one man inside. We don’t know why, but we know that when our protagonist (John David Washington) finds the man, they speak in code. But none of that matters: Not the man, the protagonist or the terrorists. What matters is the chaos of gunshots — sporadic, piercing, deadly — and the homogeneity of the players. Everyone wears black 28

riot gear with masks, and determining who’s who is difficult by design. Cinematographer Hoyte Van Hoytema’s shaky IMAX camera immerses viewers in the soup while Jennifer Lame’s rapid editing gives each cut a building sense of urgency far more dramatic than a ticking clock. Ludwig Göransson’s pulsating score reverberates through your flesh and throws your heartbeat out of rhythm. The explosions are so loud, you feel the vibrations in the chair, and your stomach starts to tumble. It’s like being on a rollercoaster, but without the security of the lap bar. And in another year, all of this would seem passé — better than run-of-the-mill, but still familiar. But in 2020, after a half of a year spent watching movies on the couch, the bombast of the IMAX image and the thumping surround sound doesn’t just drive you deep into your seat, it transports you to another world. Too bad it’s not one a little more relaxing SEPTEMBER 10, 2020

than our own. Let’s face it: You’re probably not as interested in what Tenet’s about (time travel; or, time-inversion to be specific) or how Tenet looks (slick, clean, stylish) as you are in what it’s like to sit in a communal space for 150 minutes with strangers and not thinking about them coughing. Honestly, it’s not that bad. Everyone wears masks, and your nearest stranger is well over six feet away. And unlike watching movies in 2012, in the aftermath of the Aurora theater shooting, fears of vulnerability and exposure evaporate pretty quickly. But Tenet is not relaxing. The world feels pretty chaotic these days. Here, it’s worse. From the opening siege to the climactic battle, with time moving forward and backward simultaneously, Tenet puts its foot on the gas and keeps it there. There are some meandering jet-setting moments, but the tension never lets up. It’s like a James Bond movie, without the silly parts, or a Batman movie sans brooding. The villain is a Russian arms dealer (Kenneth Branagh) who subscribes to the adage: If I can’t have you, no one can. A sentiment he extends to both his wife (Elizabeth Debicki) and I

the world. His plan for enforcing both is ridiculously complicated and childishly simple. Like the rest of Nolan’s oeuvre, Tenet is meant to be seen, re-seen, picked apart and put back together again. He’s cultivated a career of puzzle box films, and the discussions surrounding Memento, The Prestige and Inception were just as good as the movies themselves. They prove that audiences do go for thinking summer blockbusters, and in a normal summer, Tenet might have accomplished the same. But there’s nothing normal about 2020. There were about 10 or so people at the Sunday screening I attended, and none of them were chitchatting before or after the movie. No lingering discussions in the lobby, no crosstalk in the bathroom. Maybe in a couple of years, we’ll revisit Tenet’s simplification of protagonists and antagonists, dissect Nolan’s meta-cinematic approach to storytelling, praise Robert Pattinson’s perfectly calibrated performance, and wonder why a movie studio hasn’t already fashioned a Bond-esque franchise for Washington to anchor. We’ll leave all those for another day. For now, we’ll just marinate in the fact that theatergoing is back, and it feels really, really odd. BOULDER COUNTY’S INDEPENDENT VOICE