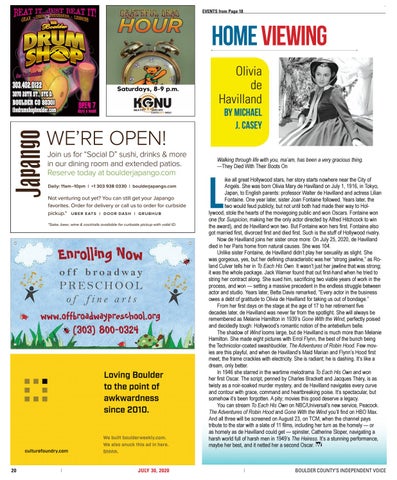 Not venturing out yet? You can still get your Japango favorites. Order for delivery or call us to order for curbside pickup.* U B E R E AT S | D O O R DA S H | G R U B H U B *Sake, beer, wine & cocktails available for curbside pickup with valid ID.

Walking through life with you, ma’am, has been a very gracious thing. —They Died With Their Boots On

ike all great Hollywood stars, her story starts nowhere near the City of Angels. She was born Olivia Mary de Havilland on July 1, 1916, in Tokyo, Japan, to English parents: professor Walter de Havilland and actress Lilian Fontaine. One year later, sister Joan Fontaine followed. Years later, the two would feud publicly, but not until both had made their way to Hollywood, stole the hearts of the moviegoing public and won Oscars. Fontaine won one (for Suspicion, making her the only actor directed by Alfred Hitchcock to win the award), and de Havilland won two. But Fontaine won hers first. Fontaine also got married first, divorced first and died first. Such is the stuff of Hollywood rivalry. Now de Havilland joins her sister once more: On July 25, 2020, de Havilland died in her Paris home from natural causes. She was 104. Unlike sister Fontaine, de Havilland didn’t play her sexuality as slight. She was gorgeous, yes, but her defining characteristic was her “strong jawline,” as Roland Culver tells her in To Each His Own. It wasn’t just her jawline that was strong; it was the whole package. Jack Warner found that out first-hand when he tried to string her contract along. She sued him, sacrificing two viable years of work in the process, and won — setting a massive precedent in the endless struggle between actor and studio. Years later, Bette Davis remarked, “Every actor in the business owes a debt of gratitude to Olivia de Havilland for taking us out of bondage.” From her first days on the stage at the age of 17 to her retirement five decades later, de Havilland was never far from the spotlight. She will always be remembered as Melanie Hamilton in 1939’s Gone With the Wind, perfectly poised and decidedly tough: Hollywood’s romantic notion of the antebellum belle. The shadow of Wind looms large, but de Havilland is much more than Melanie Hamilton. She made eight pictures with Errol Flynn, the best of the bunch being the Technicolor-coated swashbuckler, The Adventures of Robin Hood. Few movies are this playful, and when de Havilland’s Maid Marian and Flynn’s Hood first meet, the frame crackles with electricity. She is radiant; he is dashing. It’s like a dream, only better. In 1946 she starred in the wartime melodrama To Each His Own and won her first Oscar. The script, penned by Charles Brackett and Jacques Théry, is as twisty as a noir-soaked murder mystery, and de Havilland navigates every curve and contour with grace, command and heartbreaking poise. It’s spectacular, but somehow it’s been forgotten. A pity; movies this good deserve a legacy. You can stream To Each His Own on NBC/Universal’s new service, Peacock. The Adventures of Robin Hood and Gone With the Wind you’ll find on HBO Max. And all three will be screened on August 23, on TCM, when the channel pays tribute to the star with a slate of 11 films, including her turn as the homely — or as homely as de Havilland could get — spinster, Catherine Sloper, navigating a harsh world full of harsh men in 1949’s The Heiress. It’s a stunning performance, maybe her best, and it netted her a second Oscar.